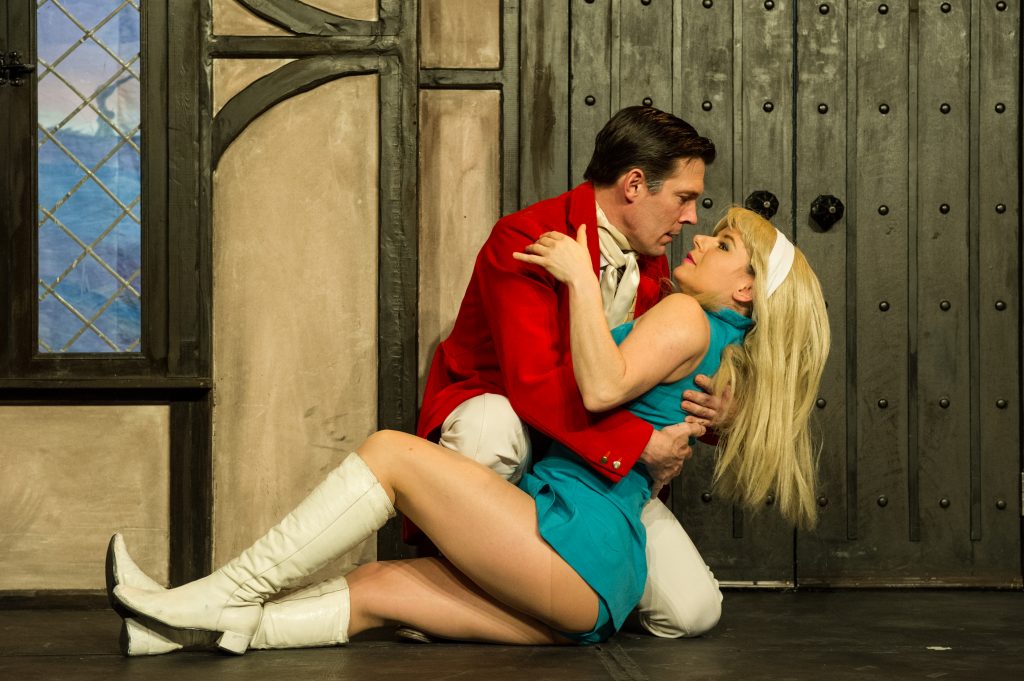 Lisa Wolfe and her trusty sidekick Peter Chrisp have been to see Spymonkey’s Cooped. Lots of times. So how has it fared, twenty years on?

This year Spymonkey celebrated their 20th anniversary with a revival of their most widely seen show, Cooped. We fell in love with Cooped when we first saw it at Komedia in July 2001, and went on to see it again as often as possible over the years.

Directed by Cal McCrystal, (now famous as the director of One Man, Two Guvnors, Don Quixote at the RSC, Iolanthe for ENO and much more), Cooped is a pulp Gothic horror inspired by Daphne Du Maurier’s Rebecca and the 1960s horror soap Dark Shadows, which Cal watched as child in the USA. Lucy Bradridge’s wood-panelled set is based on Collinwood Mansion in Dark Shadows.

Like their first show Stiff – Undertaking Undertaking, (which won a Total Theatre Award and other accolades at Edinburgh Fringe 2000) the play is supposedly written by the classically trained actor-manager Forbes Murdston (Toby Park), who has miscast three unsuitable performers – the Spanish soap star Alfredo Gravés (Aitor Basauri), the German Expressionist Udo Keller (Stephan Kriess) and catalogue model Mandy Bandy (Petra Massey). Mathew Baynton (an actor and director who was Cal McCrystal’s assistant on Spymonkey’s 2007 show Bless) called ‘the multi-layered dynamic of a Spymonkey show – the actors are playing clowns who are playing characters.’ In this new version, Forbes announces at the start of the show that ‘unfortunately, all the original cast are still available.’

In Cooped, Mandy Bandy is playing Laura du Lay, ‘a young girl who arrives at a remote railway station in the heart of darkest Northumberlandshirehampton to take up her position as confidential secretary to the reclusive Forbes Murdston. Beautiful, fawn-like, swinging, but a hostage to passion, Laura knows now that life – and love – will never be the same again… And her an orphan!’ 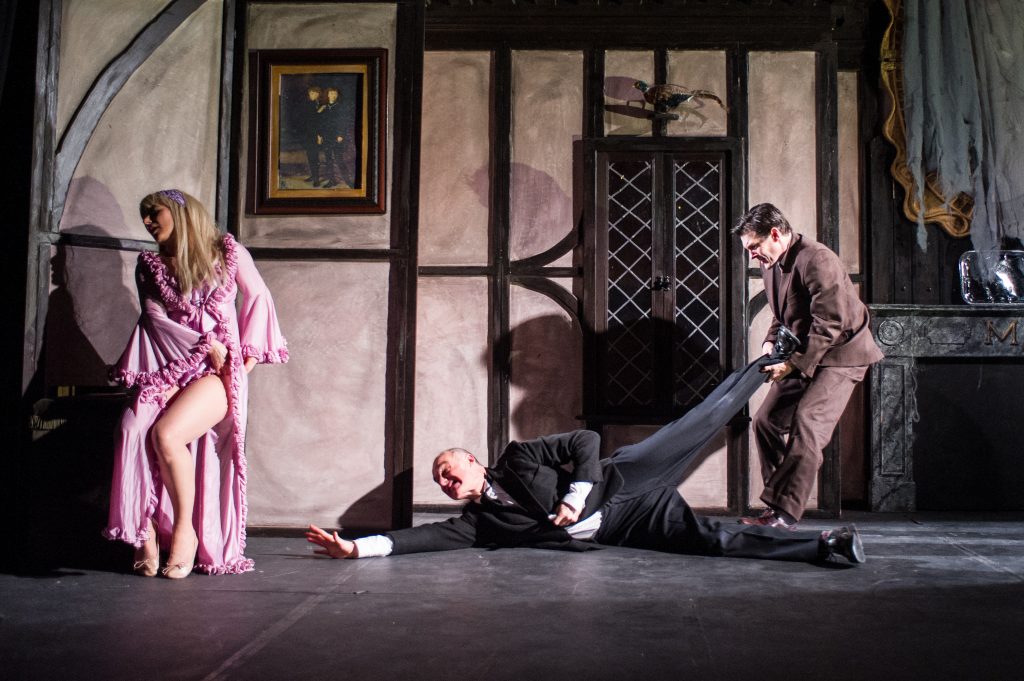 The comedy comes from the clowns’ conflicting agendas and delusions. Murdston believes he has created a serious drama. Mandy Bandy is unaware of the negative impact on her ‘fawn-like’ performance of her ‘digestive problem’, conniption fits and inability to bend. Gravés, cast in the character parts, mistakenly believes that he is the romantic lead, and that the audience is full of fans of his Spanish telenovela Hospital Tropical. Keller is an anarchist who doesn’t care what the audience thinks of him and who despises Gravés, sabotaging his performance at every opportunity.

In 2003, when Spymonkey failed to get Arts Council funding for a third Forbes Murdston play, they went to Las Vegas and spent two years working with Cirque du Soleil. When they returned to the UK in 2006, they brought an expanded Cooped, with a bigger set for midscale touring. The show was twenty minutes longer and now had an interval. There were also two musical numbers and a routine with ping pong balls that had been judged too filthy for Las Vegas. The new version, which we saw at Theatre Royal Brighton during the 2006 Brighton Festival, was a triumphant homecoming for Spymonkey. We saw it again later that year at the Assembly Rooms in the Edinburgh Fringe where it was shortlisted for a Total Theatre Award. It was back in Brighton again in 2013 at The Old Market followed by a run at the Leicester Square Theatre.

The 2019 production, (a Worthing Theatres and Brighton Festival partnership) has again been reworked by Cal McCrystal. It has a rebuilt set (the earlier one was thrown out, supposedly not needed anymore) and smart new costumes by Lucy Bradridge. Laura du Lay’s dream sequences, involving Hassidic Jews and Chinese martial arts fighters, have been cut to avoid causing offence. In their place, we have quarrelling monks and two scenes recycled from the 2007 show Bless – a folk song and the parable of Mother Theresa, the Good Samaritan and the dirty beggar. The monks have less to fight about than the Jews did (no penis size comparisons here), and the song, in this acoustically challenging venue, is hard to hear and lacks context. There’s also some added magic – it’s filler, but fun.

Watching Cooped many times means you can’t recapture the surprise impact of scenes like the naked dance sequence, which still draws gasps of disbelief from audiences. Forbes struggling to erect a horizontal Laura remains a remarkable physical sequence, and Keller is as grotesquely expressionist as ever. Old-handers like us look forward to certain moments, such as the deranged thing Murdston does with his tongue during his suave opening speech, or Gravés taking Murdston’s pulse and winking for his Hospital Tropical fans. Will the egg dropped at the end by a flying pheasant hit or miss him, or even knock off his toupée, as it did at the Royal & Derngate, Northampton in 2007?

Cooped will always be a show that some find baffling but the vast majority thoroughly enjoy, and it has been Spymonkey’s calling card for over 20 years. 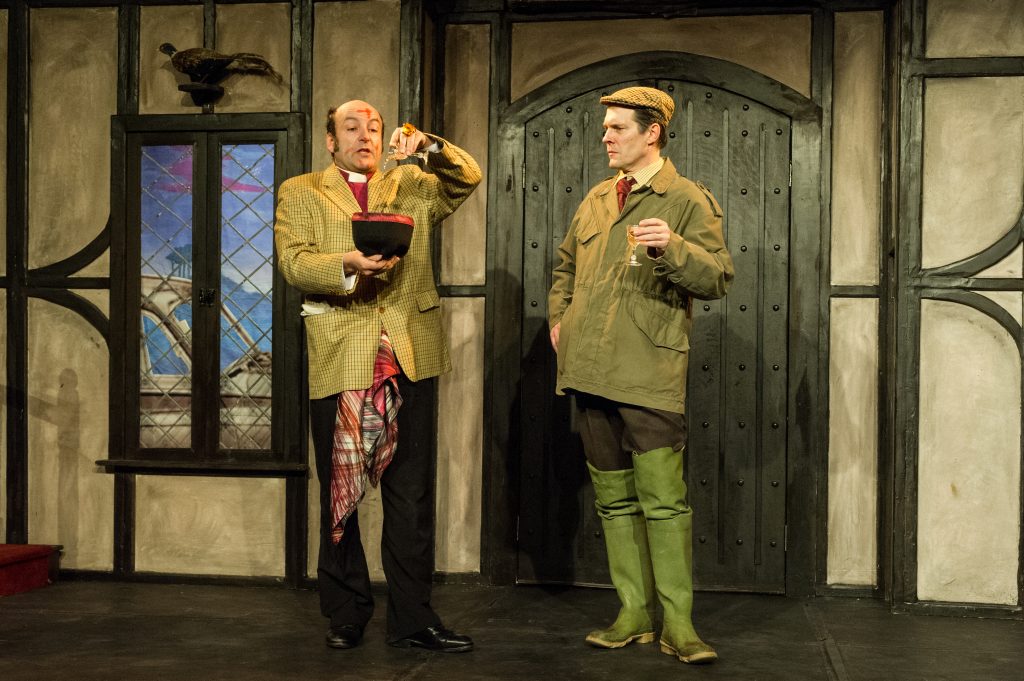 Reading the company chronology, not just of Cooped but the total output, is a snapshot of how the UK theatre scene has shifted over the past 20 or so years. In the early years, whilst making audiences laugh a lot, and despite the brilliant performance skills, the company often struggled to get funding, or bookings or reviews, sitting as they do between comedy and drama. Over the years, Spymonkey have claimed and celebrated the theatre clown tradition and connected British audiences to a more European strand of ‘total theatre’ that is beyond the well-made play. Their contemporaries Peepolykus, The Right Size and Ridiculusmus, to name but a few, followed a similar trajectory.

Thank goodness they stuck with it, as today the genre is everywhere, from Little Bulb and A&E Comedy on one scale to The Play That Goes Wrong on another, an accepted and celebrated form of meta-theatre.

The quartet has rare longevity, perhaps because two of them live abroad (Stefan in Vienna, Aitor in Bilbao) and distance keeps the relationship and the energy fresh. In 2006 Toby described how the characters they play stem from their own personalities and quirks: ‘Petra is extremely dense with the most fantastic talent for malapropisms. According to the others, I’m the good looking but rather boring one. Aitor is fat and lazy. And Stefan – how can you mock Stefan? Well, he’s the German.’ Cal McCrystal built on this chemistry, also exploited by directors including Jos Houben and Rob Thirtle (Moby Dick 2009) Emma Rice (Oedipussy 2012) and Tim Crouch (The Complete Deaths 2016).

All four have full creative lives outside the Spymonkey bubble; variously directing, composing, teaching and performing on the world’s stages. But when they come together they are family. The muscle memory kicks in and their bodies, though 20 years older, admirably rise to the physical challenge that Cooped provides.

Now the subject of four dissertations – the BA dissertations by Mathew Baynton (mentioned above) and film director Smari Gunnarsson, both Rose Bruford alumni; and doctorate theses by Laura Cockett at Liverpool University and Lucy Amsden at Glasgow –  Spymonkey are a huge influence on younger theatre-makers, in demand for collaborations across the globe. Cooped is about to take Blackpool and Florida by storm (not literally one hopes). So all hail Spymonkey and long may they bring glorious, clever filth to audiences everywhere. 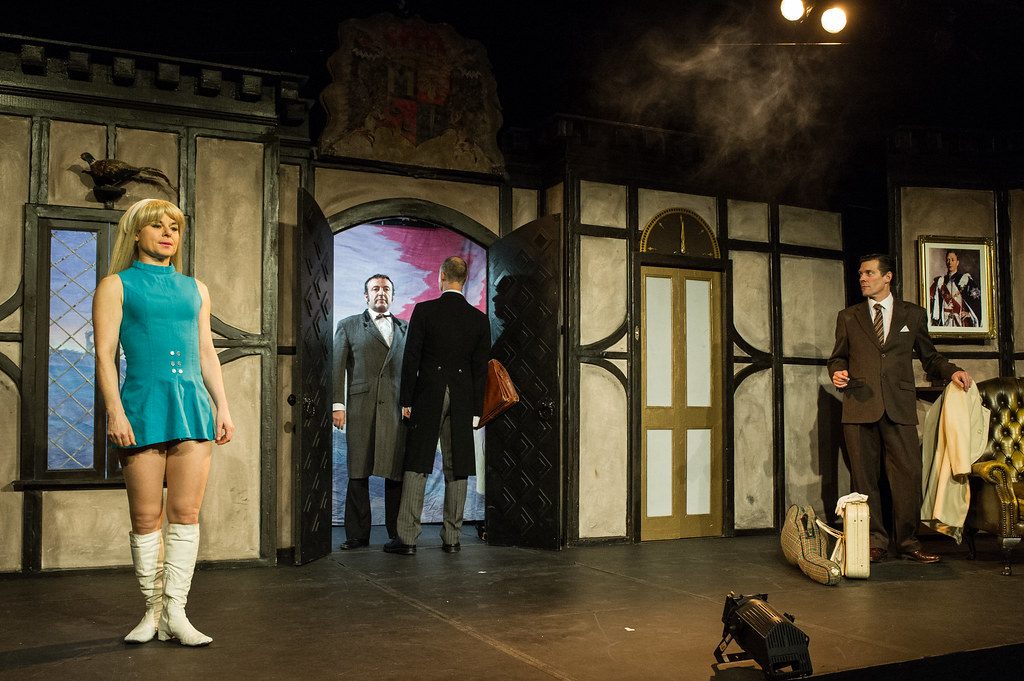 Additional contributions by Peter Chrisp theatre archivist, author of Carnal, Bloody and Unnatural Acts and How Spymonkey Became for The Complete Deaths programme 2016.