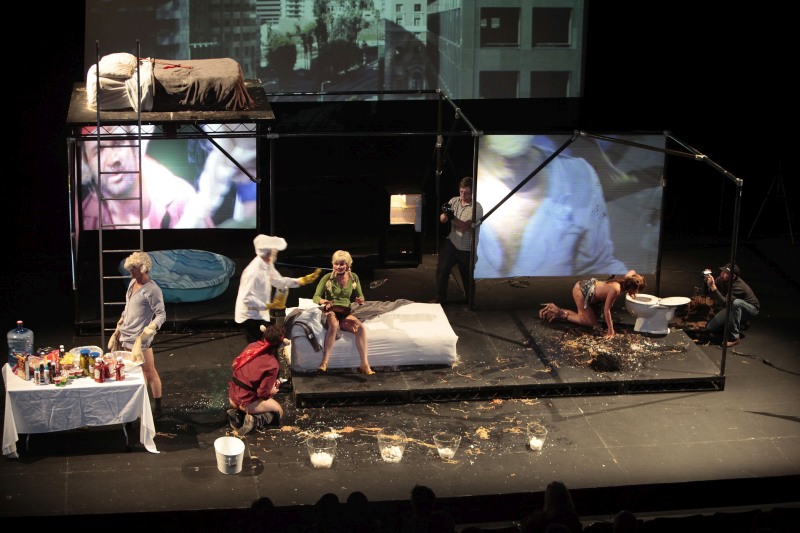 A cheerful woman is driven into a baleful rage by public art she cannot escape, the company enters the stage to sit and read through all the emails they sent regarding their residency in LA, and finally they present the show they have been working on. This is the potted synopsis.

Every moment of this show contains the seeds of a thousand thoughts. This is the perfect, irreducible complexity of truly great art. We see the insane workings of cultural production; the gulf between Europe and the US; the fractious personal relationships and the absurd intellectual elitism of high art; the personal cost of artistic failure; a process of creation collapsing into itself; the cost of art, public and personal, financial and emotional.

Suffused with the bleakly practical humour of the Netherlands, the text produces peals of laughter and pained recognition. A company in supreme control of the stage, they create entire worlds only to pull them out from underneath you. An approach to the very business of being before an audience that is only achieved by the best of companies, those whose continued mining of new forms and ideas, of creating shared vocabulary and understanding, allow them work at a pitch which far surpasses the tired linear forms that dominate our experience of the theatre.

Layer upon layer: discard the onion metaphor and think a hundred thousand years of sedimentary rock. There is the artist, the person behind the art, the art itself, the world which consumes and demands, the institutions, the art of being an artist; there is the understanding of the audience, the work in and of itself, appropriating meaning and stealing another’s kudos, cleaving the cache of context where the stage you work on is part of the show: look at us in the Disney theatre!

Then the switch and in a final tempest everything is released: violence, insecurity, abuse, fear, attacking and suffering, disgust, sex, revulsion, and annihilation. This is a piece of work which plays with reality itself.

Looking for Paul presented as part of Big in Belgium, Richard Jordan Productions in association with Summerhall and Theatre Royal Plymouth