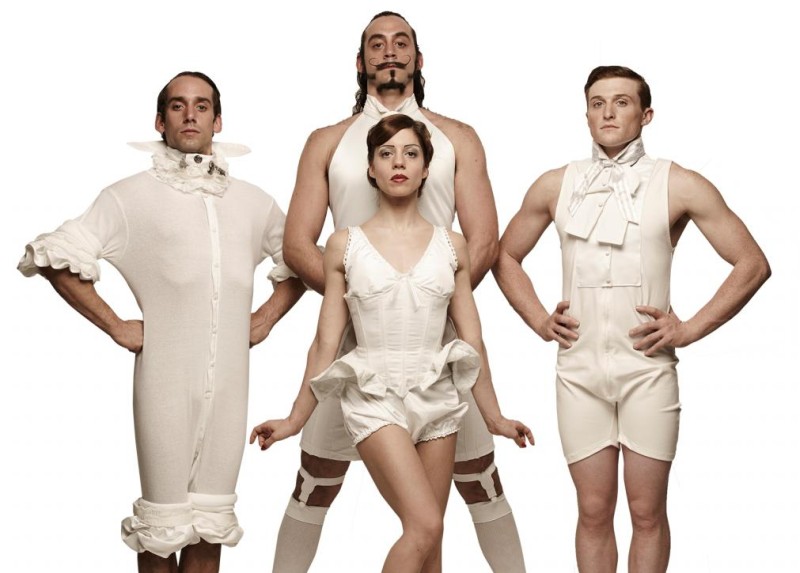 I was disappointed. I was embarrassed for the company. I was looking around for an exit. And then suddenly I was drifting through the riches of pure acrobatic bliss. The Elephant in the Room is awful and then it is breathtakingly brilliant.

The concept of the performance is to blend film noir, physical comedy, and circus into a single theatrical circus show. From the beginning the noir film titles were a fun idea, but messy and difficult to read on a textured backdrop. Then early in the show the focus was on physical comedy, which occasionally succeeds but frequently falls flat. But more than the physical comedy, director Charlotte Saliou sadly has the acrobats speaking boring, over-extended dialogue that is spoken too quickly and quietly against a much stronger musical score, and lacks bite, humor, or clarity. There is some fun in the dialogue, as they occasionally throw in a salty French word that holds its own with the flair and power of the overall production values.

I hoped things would get better, but, to be honest, I wasn’t holding my breath. To my great joy, after the first roughly 20 minutes, there was nearly no more speaking, and the world-class acrobatics took stage front-and-center. And when I say world-class acrobatics, the hand balancing and partner balancing acts presented here could hold their own technically and artistically with the best in the world. After the slow, tedious start, Elephant blossoms into a majestic, sensual buffet of acrobatic wonder.

Philip Rosenberg, Gregory Arsenal, Lolita Costet, and Yannick Thomas, the four-person company, perform acrobatic sequences alone, in various combinations, and finally all together, with the skill, flair, and playfulness that marks them as masters of their art. Saliou redeems herself in spades with adept artistic direction in perfectly drawn sequences that make acrobatic virtuosity silly and sexy in equal measure. The acrobatic bliss carries beautifully for a solid 40 minutes, and left the audience leaping to their feet. Of particular note is a hand balancing duet that features Rosenberg and Arsenal with hints of dance, homoeroticism, and some of the most exotically perfect hand-balancing images in recent memory.

Once I picked up my jaw off the floor, Elephant left me giddy with appreciation for their circus voyeurism, courage, and dazzling skill. And even those first few unfortunate minutes couldn’t wipe the grin off my face. 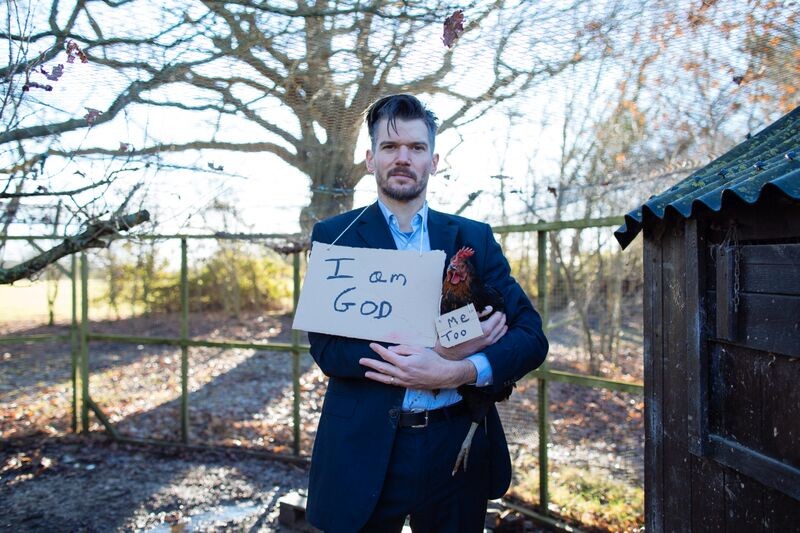 Paradise Lost (lies unopened beside me) is a solo performance by Lost Dog that sets out to present Milton’s Paradise Lost as a one-man epic. Ben Duke, the writer/performer, plays every part, and tells us early on that he hopes we haven’t actually read Paradise Lost, because he’s about to take some liberties. Duke’s gentle, open demeanor draws us in immediately. He chats with us and opens up about the nature of the performance while he takes us on a gentle journey through his domestic retelling of the Garden of Eden and how things didn’t go so well.

God and Lucifer become partners in common domestic challenges, and Duke finds comedy and apt comparisons throughout. Where the performance hits its core is when Duke’s own reflections on fatherhood create an elliptical effect, and we hear his fears about the possible loss, injury, or kidnapping of his small child ring out with echoes of the creation of humanity. It is these personal anecdotes that bring this Paradise to its grandest ambitions and most universal underpinnings. Our hearts break along with Duke’s at the notion of these haunting images.

Paradise also plays with the nature of its form. Duke speaks several times about creating the show as a dance, except that he wound up speaking far more than he intended, and not dancing nearly as much as he’d like.

In fact, one could describe his performance as a dance of words, because his rhythms and senses dance with us from beginning to end. Duke is an exceptional performer vocally and physically. He wraps the audience around his finger with bits of charm, then holds us there with the grandeur of his curiosity. Simple technical elements are used to astonishing effect in movement sequences that he sometimes describes as much he actually dances. Chickpeas take central stage for one of the loveliest of these sequences.

He may not manage to work through all Milton’s epic poem, or even much of it. But not to worry, Duke reads us the conclusion of the poem at the very beginning, so whatever digressions and adventures carry us away, we can rest easy because we all know how it ends. 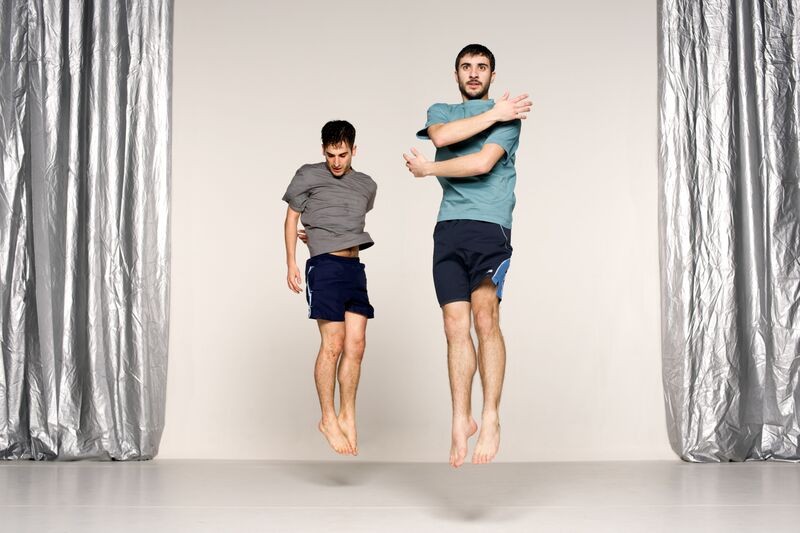 Igor Urzelai and Moreno Solinas ooze sweetness. From the first moment Urzelai and Solinas walk onto their white stage, their innocent grace showers the theatre. What follows could be called contemporary dance, performance art, experimental theatre, investigations on endurance, a lot of jumping, or who knows what else, but whatever you call it, it’s lovely.

They walk on stage and sing in perfect harmony, gazing sweetly at the audience for several minutes. Then they start jumping in perfect synchronicity. They continue jumping for the majority of the next hour. This act of jumping somehow manages to become beautiful, political, social, comedic, loving, defiant, poetic, and entrancing. These tones emerge out of a willfulness to continue.

In the program, the artists note that they set out to change the world with a performance, then felt like idiots, and eventually committed to stick together, persevere, and do their best. That Urzelai and Solinas sing and jump and jump some more (and more) doesn’t particularly seem to resonate with any of their goals, but the spirit with which they commit to their pursuit makes Idiot-Syncrasy a distinctly political work.

Over the hour of jumping I laughed, I quickly loved them both, I drank whiskey together with the entire audience, I drifted into a repetitive jumping-induced trance, I saw blurred images of two men in constant movement in a very hot room (it is fair to note that the Main Hall at Summerhall, not unlike several fringe spaces, is in desperate need of increased air circulation), and then eventually they stopped. 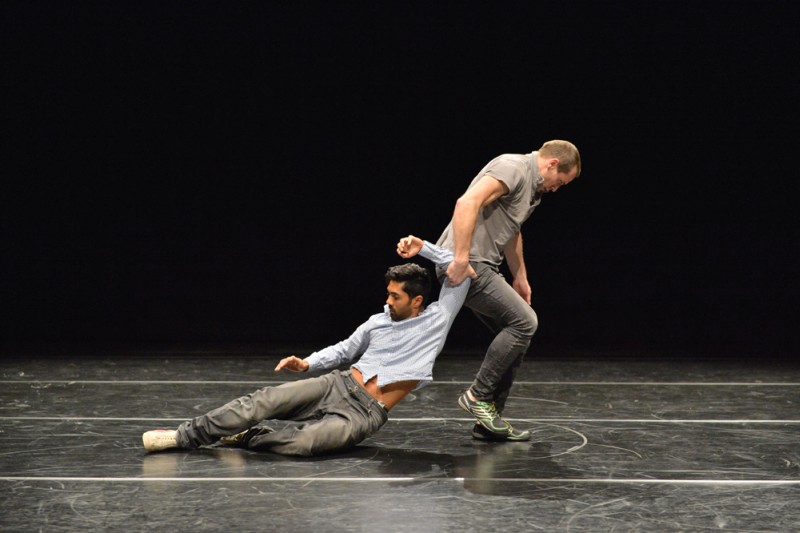 Beauty of the Beast presents an engaging, sometimes humorous, examination of male dynamics across a range of personal and social situations. Presented by Company Chameleon, and choreographed by Anthony Missen, Beauty plays with and against a vast range of male stereotypes. The company moves sporadically through a variety of forms, from classical dance to theatrical farce, each lending a different set of eyes to notions of maleness.

Through the hour we meet a gang with ridiculous initiation rituals, a hip hop evolution of man, a trio with a man and his two vicious dogs, vulnerable male solos, and many more snippets of men. The sum of the parts may not add up to more than a mashup of maleness, but it is riddled with delights along the way.

The six-man company shows flashes of brilliance in their dance partnering, particularly whenever we find Thomasin Gülgeç on stage. Gülgeç’s movement blends elements of capoeira and martial arts in fluid, complex phrases marked by explosiveness and sensitivity. He is a joy to watch, and thankfully is used here with frequency.

In beginning of Beauty we find two dancers wearing only gently shaded spandex, moving with eloquence to refined classical music, and for a moment we believe this will mark the style of the afternoon. This phrase is quickly disrupted and mocked by a gang – a kind of fake-out, an aside to the audience that they will get funkier than we may have thought in those initial minutes. After games, jokes, and energized contemporary partnering investigations, we return to solo sections that harken back to the initial duet. There is some reflection on maleness there, but the web of machismo and sensitivity circles around itself with more eagerness than the high quality pure dance requires.

The final images bring us past the tights, the gangs, the dogs, and all the stops along the way with a clarity that reminds us of the shades of virtuosity, sharpness, and connection that leave the strongest mark of what lies at the heart of men. 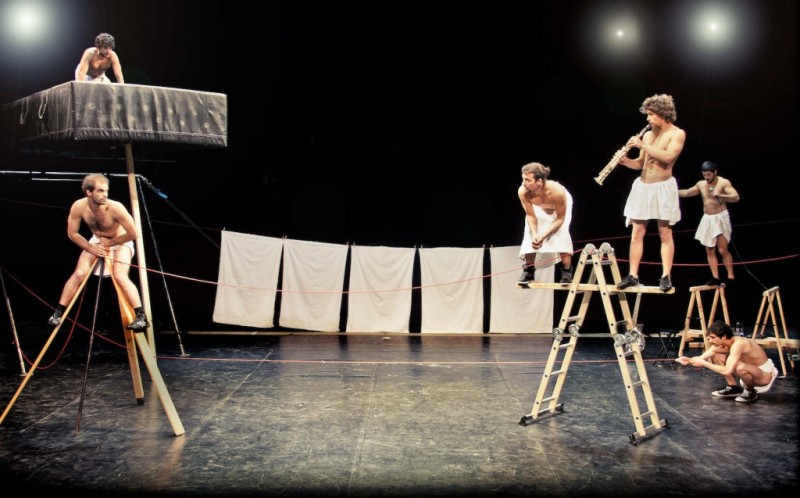 The company of La Meute (French for The Wolfpack) parade on stage in towels wrapped around themselves folded as rather thick underwear. At first, it appeared to be an opening gag, but soon it became clear that these six daredevil acrobats were going to keep these padded undies around for the whole hour.

La Meute has a lot of fun toying with audience expectations. Early on they play with the possibility of missing. They set up acrobatic structures, and then they fall or miss. The concern from the audience is palpable until their misses become so theatrical that they are clearly on purpose. Toying with the audience doesn’t stop there, but continues as a theme in this playful, infinitely lovable show.

La Meute presents themselves simply on a nearly bare stage, nearly bare, and without the hyped atmosphere we see at most circus shows. This simplicity allows the company their full glory. This six-person company is multi-talented as acrobats, musicians, and comics. Throughout the show there is constant play with expectation, momentum, relationship, and danger in ways that few acrobats dare. La Meute doesn’t work through individual acts and disciplines, but rather presents an hour that is fluid, musical, hilarious, and edge-of-your-seat thrilling.

There is the simultaneous shock and brilliance of watching hand-balancing on a person’s face (and other uncommon regions), snapping towels (extra towels) while teetering on ladders, and hurdling through the air at what seemed to be higher heights than the top of the circus tent.

This is an amazing circus, and the show could stop there and be wildly successful. But where La Meute is devastatingly good is when one acrobat perfectly times a little shimmy in opposition to massive human tower, or when two performers play badminton over two others leaping and flipping on a teeterboard. These opposing images appear frequently, challenging the audience to absorb silliness and danger in single visual snapshots.

This unique circus of daredevil acrobats presents a welcome twist that is as unexpected as it is glorious.