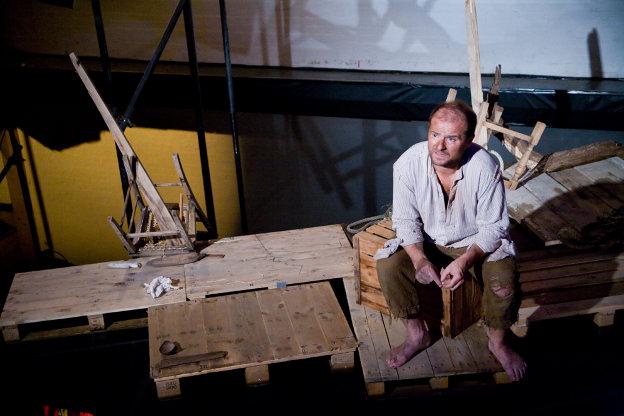 Directed and written by Tarek Iskander, deputy artistic director of pop-up venue The Yard and an artist whose previous Shakespeare productions have received critical acclaim, Shiver is an epilogue to Shakespeare’s The Tempest, set twelve years after the events of the original play. Using lines abstracted from the original, but featuring only the characters of Miranda and Prospero,Shiver explores their fractured relationship, recalling memories from the island that continue to disturb them even after all these years.

Inspired by its location in a converted warehouse in Hackney Wick, whose design (by young architects, Practice) uses reclaimed material from the Olympic Park, Shiver plays on the junkyard theme using scrap items to create the set. Designers Miriam Nabarro and Amy Yardley also manage, impressively, to accomplish a complete flooding as well as getting it to rain midway through the performance – a nice touch only somewhat undermined by the visibility of the venue staff turning the taps on and off!

We find the pair completely separated from one another with Prospero, dressed in rags and looking rundown, on ground level, sitting on a set of wooden crates that seem to float on the water like an island. Miranda, on the other hand, is on a raised platform upstage, wearing fine clothes, melancholy as she draws crashing sea waves on a box with chalk.

Despite its overall aesthetic appeal, Shiver isn’t quite up to scratch as an extension of The Tempest. Reworking lines from various characters in the original play, Shiver becomes a rather static show and its approach to the text, oddly, feels rather dated. The show feels stuck somewhere between being a modern take on Shakespeare and an adaptation of the play itself.

The overall effect is, unfortunately, a sense of trying to be clever for the sake of being clever rather than a valid extension of Shakespeare’s original work. 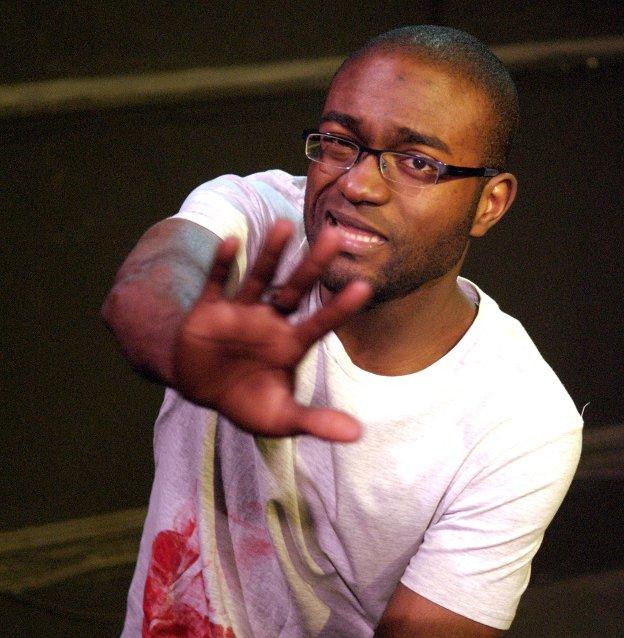 Embracing the finesse of language, spoken word artist Inua Ellams’ autobiographical The 14th Tale intends to thwart audience expectations of ‘the young black male in London’ with an intricate look at a young man embracing a mischievous side which notoriously runs in his family.

Produced by Fuel, The 14th Tale made its debut back in 2009 at the Arcola Theatre, moving on to the National Theatre where it saw much success. Now at Tara Arts in south west London for only a short period of time, one can’t help but notice that Ellams’ intricate autobiographical piece is perfectly suited to intimate venues such as this.

As he stands alone on stage wearing what we assume to be a blood-stained t-shirt and trousers, it’s easy to expect The 14th Tale to be another story of a young black man in London who has been swept up in knife/gun crime. Instead we are provided with a complex tale of family life, friendship and love.

With Ellams’ intelligent form of storytelling, we travel with him from his childhood in Nigeria to his adolescent years in Dublin and London. He reveals that his grandfather and father were infamous in the village for their troublesome pranks. Clearly intent on upholding his birthright, he causes trouble wherever he goes and invariably gets caught.

With his only stage prop a chair, Ellams incites the imagination of the audience through his words, creating a gentle rhythm that doesn’t allow the mind a moment of respite as he eloquently retells key moments in his life. An absolute pleasure to listen to, the delicacy of language utilised in The 14th Tale contrasts with the leaping and bounding about on stage. There is real energy to the show, with some hilarious impersonations of the people he has met.

Overall The 14th Tale is the playful story of a man grounded in his past, proud of his heritage and mixed cultural upbringing. Delivered with perfect timing in a wonderful style, it’s both a playful and intelligent production. 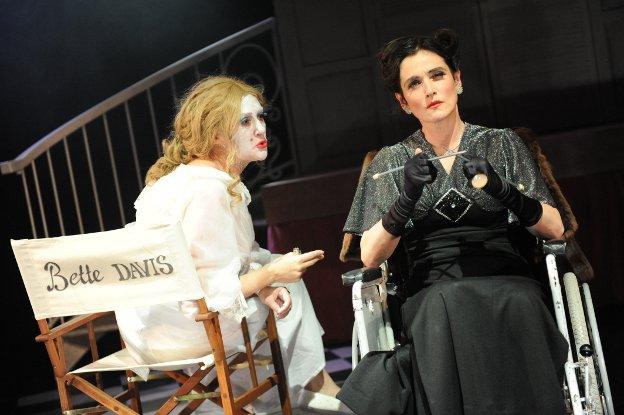 Inspired by the infamous feud between Hollywood actors Joan Crawford and Bette Davis, Bette & Joan is set in the bedroom of Bette Davis – where, in the last moments of her life, she is lying in bed wearing a nightie and hairnet, grumbling about her glamorous past whilst clutching a picture of her daughter in one hand, a drink in the other. Projected onto the back of the stage, watching over her, are the notorious gossips Hedda Hopper and Louella Parsons who decide that Bette is in need of some help in crossing over to ‘Hedda Hopper’s Hollywood’ – an afterlife for the famous – and who better to take on the task than Joan Crawford?

Sarah Thom (Bette Davis) and Sarah Toogood (Joan Crawford) together on stage are perfect as the two ‘old broads’ battling it out. Their dialogue is perfectly timed, sharp and witty, with Thom providing a particularly strong characterisation of a broken, self-obsessed woman, sitting in her room compulsively taking off and reapplying ridiculous make-up and fanciful wigs.

Despite the assortment of comic scenes, the overall impression from Bette & Joan is that the life of these so-called glamorous women was actually rather tragic. Behind them is a trail of destruction – failed marriages, domestic abuse, abortions – showing the sacrifice they paid to have a career in Hollywood. We are left with a lingering image of two wrecked women that gradually became a parody of the psychotic, lonely characters they played many years ago in What Ever Happened To Baby Jane?.

A gritty yet funny piece of devised theatre, Bette & Joan ensures that lovers of the Hollywood icons won’t be disappointed. 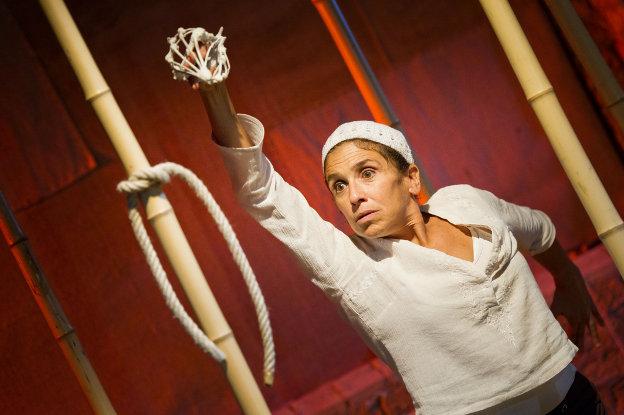 Uniting the oral tradition with physical theatre, Kathryn Hunter and Marcello Magni come together for Tell Them That I Am Young And Beautiful in the studio space at the Arcola Theatre. Comprised of short stories from around the world, with text by Gilles Aufray, the production is an impeccable example of the strength that lies in simple storytelling.

Tackling themes of love, friendship, truth, greed, and sacrifice Tell Them That I Am Young And Beautiful on the surface has a lovely minimalist quality. There are few props and Tunde Jegede single-handedly provides most of the music, resulting in an uncluttered retelling of traditional tales which retain their cultural identity. Without fanciful extras, the performers and their words take prominence, reigniting the creative essence of the oral tradition on stage, turning ordinary moral tales into something magical.

Marcello Magni and Patrice Naiambana provide much of the light entertainment, notably in ‘The Bone’, based on a story from the book Tales of Amadou Koumba, which charts the greed between a man and his ‘brother more than a brother’ as they try to deceive one another in order to gain the thigh bone of a cow. As they subtly attempt to outdo and outwit one another, it’s impossible not to laugh at the absurdity of their actions with Patrice’s cool resolve contrasting to Marcello’s ridiculous stubbornness.

It is, however, Kathryn Hunter who captivates. She flutters between characters with such ease that it is truly enchanting to witness. One moment she is a narrator from Italy; the next a cockney pigeon. Blink and you’ll miss her transform again into an elderly woman offering sage advice to her townspeople.

Well written, well acted, well directed, Tell Them That I Am Young And Beautiful is a perfect example of how work in a small space can allow you to explore the world without ever leaving your seat. 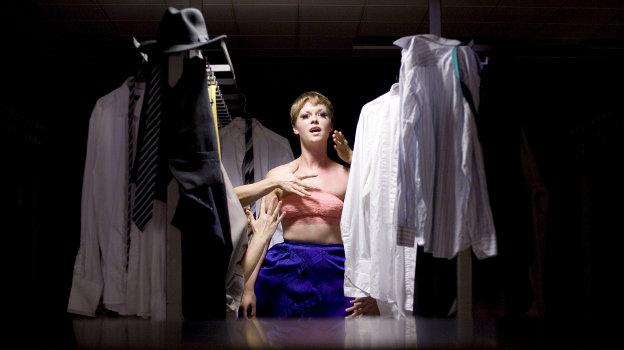 Exploring the absurdity of the fashion culture ‘IT girl’, dance-theatre company dANTE OR dIE brought their promenade piece La Fille à la Mode to the National Theatre this weekend as part of Watch This Space festival.

La Fille à la Mode begins with a mysterious woman wielding an accordion who begins to play and, like the Pied Piper of Hamelin, to lure you around the theatre. What follows are a series of sketches where the entirely female ensemble scatter themselves around the building– over stairs, in gaps, behind windows, in cars – re-enacting fashion poses and executing enchanting dance routines. It quickly becomes clear they are a mockery of how peculiar and destructive this world can be, dancing as if enthralled by a vodka bottle or stretched over a ledge replicating absurd sexual experiences.

Much of La Fille à la Mode is intimate, using the smallest spaces of the National Theatre, cramming everyone in a lift or into a small corridor. At times it can be frustrating, trying to catch a glimpse of performances without inadvertently ruining another’s experience, yet the enclosed spaces provide some of the more memorable moments, notably the serenading of the men in the audience – entirely in French and with a ukulele.

More surprisingly, the closeness you experience is offset by a clear boundary placed between you and performers as you are made to slip into an overtly voyeuristic role. Handed a drink and seated, you are drawn in and reinvented to become one of the predatory men that the women sing of, as you watch three women seductively dance on the bar. It’s a fantastic moment, showing how effortless it can be to slip into this world.

On the whole, La Fille à la Mode manages to create a very balanced show. It’s not too solemn, not too comic; intimate yet not too invasive or embarrassing. It also ends with a fantastic, haunting routine, the performers donning black veils over their faces, moving in silence.