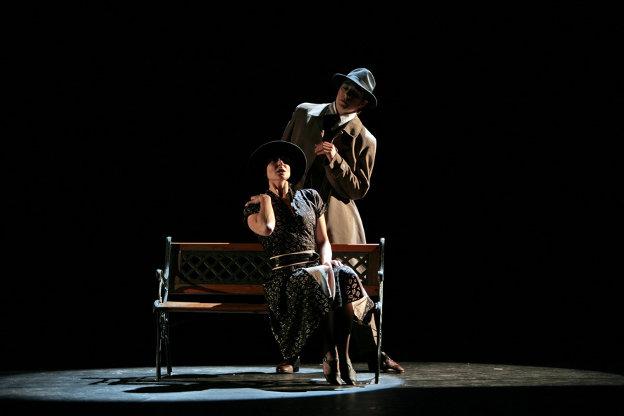 Making creations about creating can be a risky business. Whilst there are moments in this two-handed collection of short pieces – performed by French mime duo Sara Mangano and Pierre Yves-Massip – where the risk certainly pays off, it is not all smooth sailing.

The Child of the High Seas, one of the four pieces, sees a shipwrecked man staving off his desperation by creating stories; as he writes, the protagonist of his tales – in all of her polka-dotted glory – spins into being. The act of creation is exposed, with skilled playfulness; once he has ‘made her’ he places himself invisibly into her world, at once the creator and the created. In Trace, Yves-Massip sculpts a ball of solid clay and from his deft staccato movements, worlds spring. As he conjures something from nothing – the trump card of creation – we share in each live moment of this process; it is tactile, primal and completely absorbing.

Both Mangano and Yves-Massip demonstrate a high level of technical skill throughout all four pieces and a commitment to creating which is energising and impressive. Yet the title piece of the performance – a portrayal of a couple’s dysfunctional relationship – almost feels like the weakest. The two performers seem to be in danger of creating too much with too little direction and though there a few are genuinely moving moments , the heart of the tale feels swamped by the pace of the telling, the overly crowded soundtrack and frenetic movements starting to feel more like virtuoso tricks than engines of story. To tell the truth, as the title commands us to, it feels rather hollow.

Yet the pervading impression of the four pieces is strong. The investment from both performers is abundantly clear, the passion infused into every nuance of action is contagious, and it’s packed full of visual charm. Though it is the ‘other stories’ that triumph here, the main story seems to be a celebration of creation – and that’s a story well told.