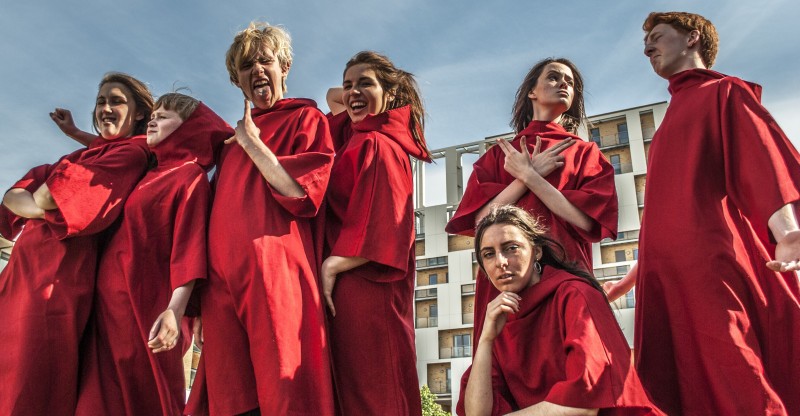 Babolin combine a young company comprised largely of first-time (and genuinely excellent) Fringe performers, with a seasoned creative team including director Al Scott and Composer Tom Penn, whose presence ensures continuity in Babolin’s trademark style. As with their previous work, such as 2011’s To Avoid Precipice, Cling to Rock, ensemble playing, joyfully ridiculous narratives, and stylised movement are at the fore, in what turns out to be a stunningly silly monk-based plot involving plenty of chanting and a goat for a sidekick! They also return to the narrative of working with characters on a high-stakes quest, this time in the form of young apprentice monk Fish, who must return to his home village of Depravia to rid them of plague. The ways in which he does so are too numerous and complex to chart here, but the story is set up so that Fish’s fate as the saviour of the piece is never in question (particularly as he has the able assistance of his rather pompous but loyal pet). Infused with a clear folkloric flavour, Fish’s past is not what it seems, and when he learns of the true nature of his birth and parentage, he is finally able to fulfil his obscure but highly important destiny.

The residents of Depravia and the chorus of monks are all beautifully characterised by the ensemble cast, whose musical ability in choral singing is only surpassed by their ability to sustain the hilarious and bizarre accents supposedly typical of this remote land. Fish himself is played as a stereotypically naïve and innocent hero of the people to great effect, and as events progress and the tension mounts his child-like reactions and inability to really grasp events effectively builds the comedy. Director Scott shapes the piece very well, choreographing some imaginative transitions including some inventive physical and visual sequences, such as characters turned into tiny models in front of our eyes and the ‘lady of the lake’ appearing phantom-like from behind a piano, her flowing locks operated by the company.

This was the first performance of the show (which runs for a week) and my only quibble would be that towards the end it felt like it could have been a little pacier. It is particularly delightful to see a piece which is so firmly tongue-in-cheek in terms of style, and so when this ironic eyebrow-raise disappeared towards the end, the shift felt hard for us to navigate. In all though it is very engaging, with the inclusion of accomplished characterisation and particularly effective vocal work and a narrative that kept me invested in the characters throughout.