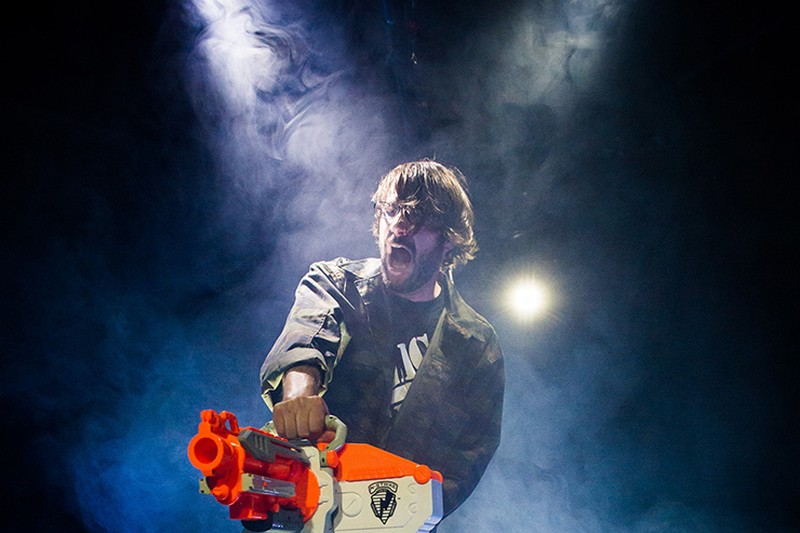 As we enter the quirky inflatable dome created for the show, a man inside is repeating the phrase ‘Get out of the way John!’ in an exaggerated American accent, whilst another is sat behind a DJ / tech desk at the back dressed in a metallic silver morph suit, sunglasses and motorcycle helmet. Once seated we are each encouraged to repeat the expression in slightly different ways, which people are surprisingly willing to do. The man is Andy Roberts, who claims to have watched the Terminator 2 movie 238 times, which is how many times we have now heard the expression ‘Get out of the way John!’ Much of the rest of the show features enjoyably low-fi re-enactments of scenes from the movie interspersed with Andy’s autobiographical reflections on his preoccupation with the film.

The piece is firmly within the Live Art / New Performance tradition: the performers appear as themselves, sometimes self-consciously pretending to be characters from the film, and it has a collaged and fragmentary format. It is postmodern in its references and deconstructions of popular cultural experience and its resigned knowingness and sense of nostalgia for the non-self-reflexive enjoyment of mainstream entertainment. It would have been possible to simply re-enact the story in the most skilful and amusing way possible, like Charles Ross’s One Man Star Wars, but this approach reflects upon and makes complex the experience.

The re-enactments of scenes are often great fun. On the night I went the audience participated with real enthusiasm, testament in part to the performers’ playful charm, and in part to the use of enjoyable props. There is a chase sequence using remote controlled cars bearing cardboard cut-out heads of the characters; and later we are all blasted with plastic balls shot from a really cool looking toy gun. The interactions with the would-be T1000 in the morph suit (James Baker) are also a source of much amusement, and this relationship helps us understand the Andy ‘character’ more fully.

The autobiographical elements feature some charming recordings of family members doing lines from the movie. There are some well-realised interactions between Andy and these recorded voices, especially with his 4-year-old niece, for whom he turned the Terminator 2 into a picture book (which would have been nice to see). He compares his father’s clearly conceived life plan with the lack of direction felt by his own generation, and wonders whether this may be connected to his preoccupation with the film. It is an interesting theme but it felt to me like a bit of a stretch, or rather, I think I would have preferred more of this train of speculation woven into the show earlier. The fun bits are indeed fun, but more deconstructive delving would surely play to the company’s primary strengths, whereas there are plenty of accomplished clowns on Edinburgh playing silly games very well with their audiences.

What is the significance of the movie to him? Why does he think it is his favourite? I wanted more time and space for consideration of these interesting questions, which perhaps an earlier arrival at the ‘moment of sincerity’ would have helped with. Still, I certainly appreciated much about the ambition of the work, operating in the area between art and entertainment, and there is no doubt that the audience in attendance thoroughly enjoyed it.