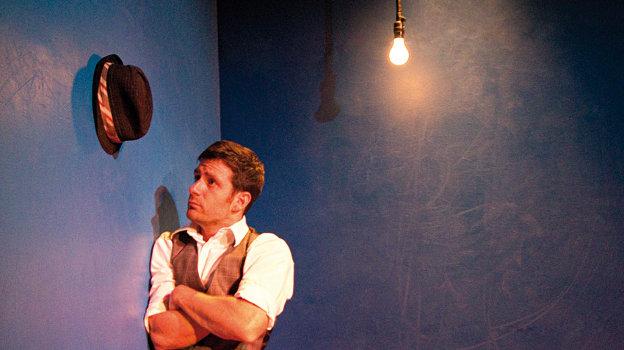 Following the huge success of Leo at the 2011 Edinburgh Fringe, where it won both a Fringe and a Carol Tambor Best of Edinburgh Fringe Award, it was a delight to finally catch Circle of Eleven’s magical and rather moving meditation on one man’s state of mind and experience of solitude. Combining unparallelled acrobatics and state of the art ‘sleight of hand’ digital manipulation, the show immerses us in a Becketian trance-like state of dreams, fantasy and (literal) virtual reality as multi-skilled performer Tobias Wegner commands his intimate space and has his every moved echoed by a parallel projection in a perception-defying feat of surreality.

There’s a dark, absurdist clown-like humour which forceably drives Leo, but this is no one-trick circus pony. The on-stage and emotional isolation is compounded by an equal sparsity in the aesthetic which at times echoes the work of Philippe Quesne (L’Effet de Serge in particular), but Leo never feels derivative – far from it. The sharpness and courage of the acrobatics and the equally powerful mime-esque fluidity is combined with a beautifully laissez-faire approach to the physicality which transcends any comparisons. The resulting intense absurdity of the non-linear narrative sweeps you away until you are immersed in this astonishing man’s shape-shifting universe.

The medium of circus constantly strives to explore, overcome and challenge narrative forms, often with varying degrees of success, but Leo in its own way achieved a small, important milestone by engaging its audience without detracting from the sheer skill on display. Perhaps some of the techniques were a little overused at times, but this is a very small criticism for a work so ingenious, so bold and, ultimately, so full of joy for the unbearably transient pleasures of being.