Ok, 2018 Edinburgh Fringe – it’s that time once more when I whizz through half a dozen or so circus shows and compare them to a random album from the depths of my mind. Who’s going to be this year’s Beyoncé and who will win the half-baked Half Man Half Biscuit prize? Thankfully it was a great year. 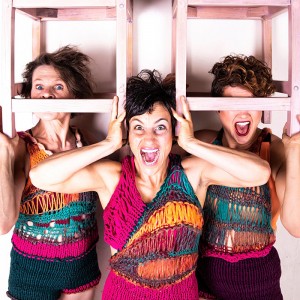 A Good Catch: Casting Off. Winner of the Total Theatre and Jacksons Lane Award for Circus

Let’s start with the winner of the Total Theatre and Jacksons Lane Award for Circus – A Good Catch and Sharon Burgess Productions’ Casting Off. Much has been said about this evidently Australian intergenerational female work, and rightly so. It’s a hugely skilled, big-hearted show that breaks down barriers throughout and wins you over from the start and all the way through this charming hour. The interaction and banter between the three is addictive – simply brilliant work from a trio who have been together for most of their entire lives. Album: The Orlons, The Wah Watusi (nostalgic girl power from a trio of female powerhouses). 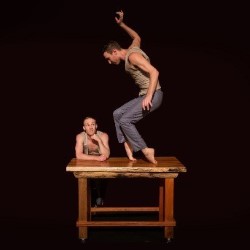 Casus: You and I

More from down under – it was indeed a golden year for the Aussies. Casus’ You and I is a moving, flowing dance-circus work, mainly ground-based but also with some truly gorgeous static trapeze. A slightly twee subject matter – the two men’s relationship, both domestic and intimate – was explored with finesse, subtlety and fragility. Set pieces merged effortlessly, I fell into their loving world and by the end was on my feet with a tear in my eye. Album: Lee Hazelwood and Nancy Sinatra, Nancy and Lee 3 (a perfect duo with evident love). 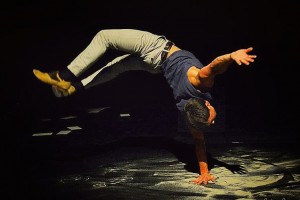 Oh sod it, let’s stick with that huge hot, dry continent as it pretty much won over the Fringe this year. Company 2’s Scotch and Soda was a massive runaway hit a few years ago, but the new work Sediment is a different proposal entirely. Another duet, this loose take on Dostoevsky’s Notes From the Underground I felt owed a little to Ricochet’s Smoke and Mirrors in parts (if they indeed saw it) and it took a little time to warm up in terms of the narrative and relationship. But boy when it did there were so many esoteric delights within. A play on relationship power, Sediment is a visual feast and feat of athleticism, subverting norms and playing with genres. I adored it. Album: Nils Frahm, All Melody (a stuttering contemporary abstract form with real vision). 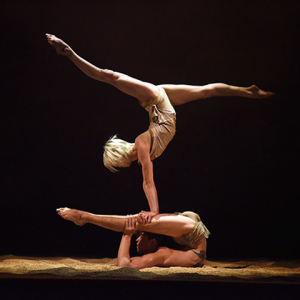 A hop and a skip over to, ummm, Hungary now, and some friends of mine making their second appearance at the Fringe. Recirquel are known for big international spectaculars such as last year’s Paris De Nuit, but here they were squeezed on to Assembly Roxy’s intimate stage for the more politicised and (melo)dramatic My Land. As with the more recent Non Solus, this saw the company downscale and contemporarise somewhat, and having seen Vagi Bence’s work lots in Budapest, I wondered how the very Hungarian aesthetic would translate over here. Lots of lean athletic male bodies and a singular (brilliantly balletic) woman saw this young troupe of acrobats plucked from the Ukraine for what was probably the most highly-skilled circus work this year. We could argue forever about the nature of ‘contemporary’ and, yes, the production values were often rather glitzy, even in the Roxy’s gothic space, but as a more complete theatrical work, as much dance as circus, it was one of the hugest hits at the Fringe and this young company should be applauded. Album: Marc Almond – Heart on Snow (historic eastern ballads brought bang up to date). 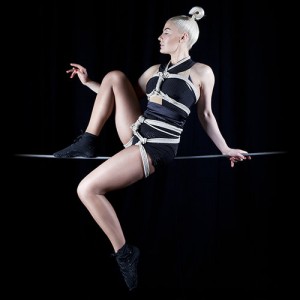 Ok, let’s head even further north to Finland and a delightful solo from Hanna Moisala’s Lumo Company with WireDo. Essentially a coupling of the ancient Japanese rope art Shibari with some dexterous work on the tight wire, one would have thought it a struggle to fill 45 minutes with just these two forms. But bring into that Moisala’s dazzling presence, connection, and some exquisite musical scoring, and the audience was hypnotised by the complexity of the rope, delicacy of the wire and the sensuality of the precise movement. Album: Neko Case – Hell On (primal nature with knotted textures). 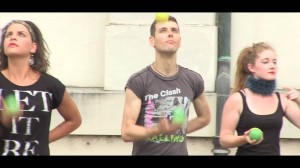 Guilty pleasure time as I return to the Roxy for Gandini Juggling’s 8 Songs. With a soundtrack of Bowie, Dylan, The Velvet Underground and more, I was already won over before I sat down. It’s a light, seamless ensemble affair that does what it says on the tin but with joy, ground-breaking juggling (obviously) and a sense that the company are loving every minute. It’s almost like a Gandini side project, so I could liken it to The Last Shadow Puppet’s Age of the Understatement, but no – let’s go with Ade’s Top 100 Spotify Playlist https://spoti.fi/2CSWlk8  (delve into my head). 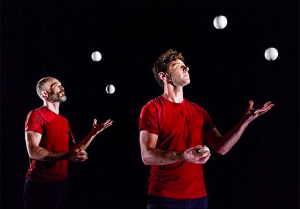 Oh actually, that side project/off shoot analogy still stands as 8 Songs performers (Chris) Patfield and (Jose) Triguero enchanted me with Gibbon. Despite being in the worst venue for intimacy and silence in Edinburgh (a pop-up box on George Street, outside Assembly Rooms), the duo beat the lorries and buses outside the flimsy, barely-tented space to create an intimate, choreographed weaving of bodies, text and (ahem) balls. Clowns in the best and least conventional sense, their charm and effortlessness was a genuine joy, so much I saw it twice. Album: Kendrick Lamar – Damn (minimalist, urgent playing with form). 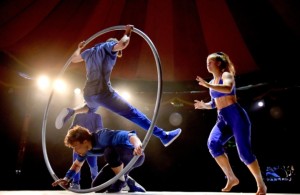 Finally, let’s head to Barely Methodical Troupe’s ‘difficult third album’ Shift. Being so familiar with the company’s work I had to switch off my connection a little – the self-deprecation of Louis and Charlie felt very familiar, but ya know, it’s becoming their trademark so let them go with it. It’s not like John, Paul, George and Ringo ever stopped being cheeky at the height of their fame. So we still want to see gentle giant Louis push his physical boundaries, and we yearn for a poetic Charlie Wheeler cyr solo – but this time they’ve lost their friend Beren for a while and brought in two new artists, Esmerelda and Elihu, which has reignited the company (not through losing Beren but through the introduction of new influences and disciplines). Some of the gags fell a little flat and I couldn’t always work out the constant metaphor of the straps, but what it achieved in my mind was communication, playfulness and sheer effortlessness in the ebb and flow of the simply beautiful ensemble work. I can’t wait to see where they go next. Album: Powerdance – The Lost Art of Getting Down (a fresh and funky place of transformation and abandon).

Ok I’m outta time and outta space. Check out the shows, check out the records. See you next year.

A Good Catch and Sharon Burgess Productions’ Casting Off was seen at Assembly George Square Gardens. Recirquel: My Land and Gandini Juggling: 8 Songs were seen at Assembly Roxy. Lumo Company: Wiredo was at C South. Hatfield and Triguero: Gibbon was at the Assembly Rooms, George Street. Barely Methodical Troupe’s Shift was at Underbelly’s Circus Hub.

All shows were presented as part of the Edinburgh Fringe 2018 www.edfringe.com

For more on the Total Theatre Awards 2018 winners and shortlist, see www.totaltheatrenetwork.org/totaltheatreawards/