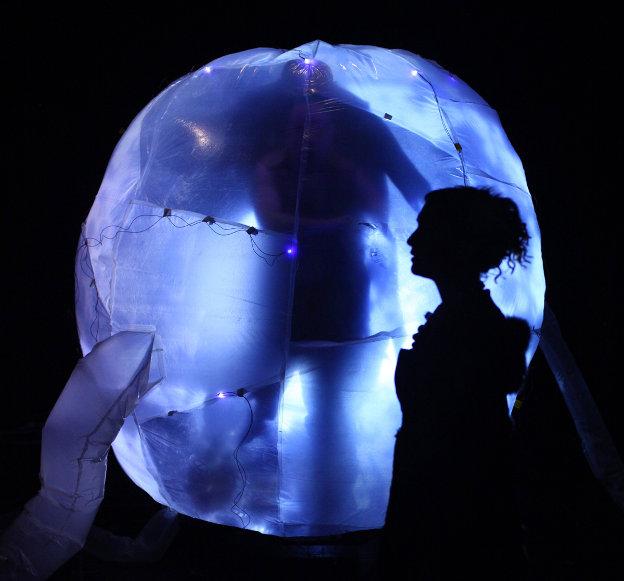 In New York City the New Year ushers in a wave of imaginative, thought-provoking and adventurous theatre in the form of Coil Winter Festival. Curated by one of the leading lights of the total theatre experience Stateside, PS122, it is an ambitious, two-week long festival showcasing the work of performance artists, dance companies and boundary pushing theatre-makers from New York and across the US, alongside a handful of international works.

2013 is the festival’s eighth year, and it seems to be thriving. Artistic Director Vallejo Gantner has enlisted ten venues in three New York City boroughs to co-present, co-commission and support the development of most of the works presented. There are four world premieres and three US premieres, and Gantner emphasises the importance to him of the collaborative and nurturing role he has played in putting the festival together with the artists and the venues. ‘I feel like I’m in the middle of a 21st Century moment of what being a presenter is,’ he says, referring to the cross-pollination of the roles of producer, curator, advisor and co-presenter of new performance. His method seems to be resonating with New Yorkers, who have made the opening performances a complete sell-out – even attracting the likes of Michael Stipe for Radiohole’s Inflatable Frankenstein, an irreverent and opaque response to the Frankenstein legend putting the Creature centre-stage.

A technologically impressive performance, the show is overflowing with sound and projection from microphones, computers, iPhones attached to the performers’ wrists and iPads hanging in plastic cases. It’s a cacophonous experience, with the six-strong ensemble reading moments from Mary Shelley’s celebrated book in unison, projecting a talking head onto the bald head of their Frankenstein and cooking up the ingredients for the creature’s brain as if they were Jamie Oliver or Gordon Ramsey. Although Jamie probably wouldn’t dump the gloppy pink results on his head, letting it hilariously drip down bit by bit, and continue as if nothing is out of the ordinary whatsoever.

Radiohole are a regular fixture in Coil, and PS122 has co-commissioned this piece, in collaboration with The Kitchen. The collective’s credits include working with artists such as The Wooster Group, Richard Foreman, Ron Athey and Goat Island, all of which is evident in the work. Most successful is the opening ten minutes in which the performers, all dressed in over-the-top faux period style costumes, sit for a post-show discussion on the show we have yet to see. ‘Leading experts now estimate that show business is currently 90% hype and 10% bullshit,’ our newly recruited host announces, before telling us that Radiohole do not need any of this hype, such is the immensity of their performance. Interrupting each other, and passing the microphone in order to be heard, it’s a sharply scripted and humourous take on themselves as purveyors of ‘important’ theatrical artwork. The rest of the show could do with a little more of this knowingness to elevate it to the ‘genuine article’ it is described as.

Across town in Queens, the charming Chocolate Factory (who produce quite the opposite of London’s venue of the same name) has teamed up with PS122 to co-commission a new piece of work from writer-performer Kristen Kosmos. There There is a laugh-out-loud funny meditation on language, performance and the struggles and contradictions of life. Christopher Walken has mysteriously fallen off a ladder and cannot perform his solo performance about Solyony, the fool from Checkhov’s Three Sisters. Dwarfed by a high red wall filled with paintings of po-faced men of the military, Kosmos gallantly, if nervously, steps into Walken’s role, aided by Larissa Tokmakova, an elegant, slightly intimidating Russian translator.

It’s a fast-paced, densely written dual-monologue reminiscent of Martin Crimp’s work, with Kosmos flitting between different moments from ‘the play’, jumping out of ‘character’ here and there to muse on her own life, and sparring with Tokmakova for power over the audience who are seated in traverse. Both Kosmos and Tokmakova are subtle yet magnetic performers. The English and Russian babble along in harmony, arrestingly drawing attention to the moments when only one language is present. The most memorable are those when Kosmos appeals to us one by one, desperately staring into our eyes trying to figure out love, responsibility and guilt.

Next weekend, The Chocolate Factory’s artistic director Brian Rogers remounts his recently created new piece, Hot Box, in the space. It sounds a fascinating, uncomfortable and compelling proposition: Rogers exercises to excess, then drinks to excess, then invites an audience to witness in ‘quiet, sustained, focused, and organised’ video how that affects a person.

Elsewhere the festival has an array of delectable theatrical nuggets to taste. Like There There, Half Straddle and Tina Satter have also been influenced by Chekhov. Seagull (Thinking of You) takes a look at performance, failure and attempted love by channeling The Seagull, with a Russian folk metal-influenced score to boot. In Ruff, Peggy Shaw examines what it’s like to have holes in your memory, drawing on the stroke she recently suffered. And if you have room for more there are performances from Croatia, Austria and France, alongside a range of dance and theatre work. ‘Coil is not just a festival presenting popular shows,’ says Gantner, ‘it’s something much greater than that – we’re taking risks and inviting audiences to see brand new work.’ The risks seem to be paying off: the shows are selling out and, despite not having a venue as it’s being rebuilt, PS122 and Coil’s reputation is growing steadily. Not content with ruling New York, Gantner will present work in Brazil this year and France in 2014, having curated a PS122 season at London’s Chelsea Theatre a couple of years ago. If you’re lucky enough to be in the city be sure to immerse yourself in the sea of theatrical experiments about to take place. And find out where the parties are – they should be just as good.