Is it a bird? Is it a plane? No, it’s a parody of a puppetry master class conducted by a middle-aged man coming to terms with the fast-approaching death of his father and the birth of his child to an ex. The introduction to Blind Summit’s Henry sets up the parody nicely; we are here to take part in the workshop due to run over the next few days. He asks if we’ve found our accommodation, and suggests if not we can sleep here on the stage floor. This is delivered as he strolls about occasionally looking at scrap of paper, presumably to remind himself of what else to say. But is this a carefully contrived device for creating the impression of a man who needs notes, or is the performer just not quite fully prepared? 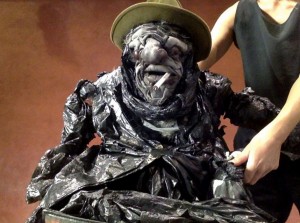 This Master Puppet Practitioner (played by Blind Summit’s co-founder and director Mark Down) is assisted by two enthusiastic German ‘students’ dressed in black outfits with heads fully covered in black hoods. The students are played by Blind Summit regulars Fiona Clift (The Table, Citizen Puppet) and Tom Espiner (The Table, Madam Butterfly) – who are, of course, highly talented and experienced puppeteers. They are first instructed in the basics of object animation using a shopping trolley and a dagger as a demonstration to the audience. He tells them to ‘ask the object what it wants to do’, and there follows a funny scene in which he indicates when it’s the object deciding and when it’s the performer.

The Masterclass is punctuated by interludes in which we discover more about the man. We hear his side of a phone call, or perhaps he’s leaving a message, and gather it’s a strained call with a romantic partner. He tells us about his father, the famous actor Henry Chesel, who showed him little affection as a child, and is now on a life support machine. Black plastic bags are manipulated to create shifting clouds through which emerges the puppet of his father, similarly constructed from black bin bags. In these dreamlike sequences the father says repeatedly ‘Let me go, Luke’.

There is a deliberate toying with the audience throughout. As he sits on a chair, he asks the audience, ‘Where am I?’ to which someone responds ’an airport’. What follows is confidently created mimed scene on a plane, seemingly improvised, but later a prop plane window is brought on, suggesting they knew this scene would occur. The plane is taking him to visit his father in hospital where he will decide to switch off the life-support machine. The father puppet emerges again through the black bin bag clouds and opens up large plastic wings that cover most of the stage. It is a strange and surreal performance that shifts between frames within frames.

Blind Summit have an enviable reputation as world-leaders in puppetry, but Henry came across as a potentially genius concept not yet fully, effectively realised. It is, though, the first outing for the show, and the company have a loyal Edinburgh Fringe audience who are no doubt a good testing ground for the show.

Still to be discovered: What is the relation between a parody puppet master class and a midlife crisis centred around a death and a birth? What insights does it offer? Is this character a jaded puppet practitioner now falling back on delivering these master classes having run out of creative juice, and how autobiographical is it? 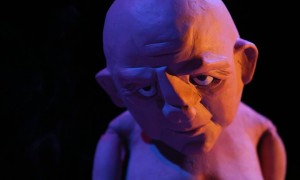 The Hit by Strangeface is also a one-puppet show – in this case, performed by ‘Mikey’, a middle-aged New Yorker finely crafted from foam and leather, and clothed only in a kind of loincloth. It is a strikingly well-made puppet, operated in a Bunraku-style by the show’s three performers (one on the feet, one on the right hand and back, and one on the left hand and head). This style of manipulation makes possible highly controlled and nuanced movements of the character, which was certainly the case here. Even though the performers were fully visible, the illusion of autonomous life they created meant that our attention became firmly fixed to the character. The performer operating the head also provides the character’s voice. Given the volume of words Mikey emits, this is a considerable undertaking and one he performs with great energy and skill.

The set is comprised of three platforms shaped to create the impression of rock slabs, and a vibrating beanbag chair in the corner. Mikey begins recounting stories from his life as a Mafia hitman from the apartment where he is currently holed up, biding his time.  He describes his philosophy of the survival of the fittest and demonstrates the use of monkey bars and gym equipment he’s had installed. These actions are mimed as he climbs the invisible equipment, a technique that will feature throughout.  His business is ‘removals… removing the garbage’ – yes, he’s a hitman.

He speaks in a Noir-ish, folk-poetry style that creates a degree of intrigue and ambiguity, especially given the myriad shifts in scene, time and frame. As he recalls a visit to a sauna (presumably why he’s wearing the loincloth), there’s an exciting release of stage mist from a fissure in the set. Here he meets what some might call a slightly effeminate man who seems to be making advances, which Mikey takes exception to. In this scene, the puppet plays the part of both characters, which makes sense given that he’s re-enacting the story, though it is unusual to see this done by a puppet. Adopting a different voice and character, the lead actor demonstrates an impressive range.  The man in the sauna says something about ‘dissonance’, which becomes a recurring theme, and points out that Mikey is a puppet, which could be taken literally or metaphorically.

It’s not straightforward storytelling but a stylistic mix of poetic, suggestive text and philosophical hints blended with narrative events. I remember some nice watery reflections projected onto the wall, and a scene in which he’s retching; I think because there’s a dead dog in the river. He seems to undergo an initiation into the gang that involves a rolled-up copy of the New York times being shoved up his bottom and set alight. He goes trampolining in someone’s back garden with a child, gets involved in a car chase and stands at a level crossing as a train passes by. Many of these ‘action’ sequences are very effectively choreographed and timed to a soundtrack, but how they fit together I cannot say and I cannot think of what Mikey actually wanted.

Admittedly I was a little hung-over, and it may be that my habit of note-taking during shows can actually distract me from being fully attentive, but try as a might to stay focused I just kept losing the plot.  Even many of my notes are reflections on how I might have become lost…

After the end of the story this same character gives an after-show talk about the psychological process of dissonance as it relates to puppetry. I did wonder if it might have been useful to begin with this, in order to funnel the audience into the show via this interesting idea. Ironically, I reflect that the dissonance I experienced was because the spectacle of the puppeteered object had little to do with the content of the script, or perhaps the script was just too complicated/sophisticated for me to take in whilst watching the puppet. I suspect I would have become more engrossed if I were reading the text from a page. The puppetry and set were very impressive, and the content of the after-show talk suggested the piece was full of interesting ideas, but the combination had a discombobulating effect on me. Another irony is that I’ve recently been reading about the illusion of Self and Modular Mind theories, so I’m actually well placed to receive the information. I note that the show was in part funded by the Wellcome Trust, and I wonder if the obligation to deliver some neuroscience had an effect on the dramaturgical decisions. 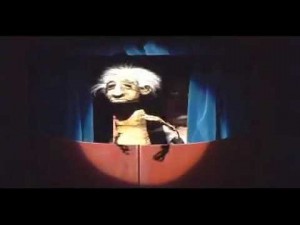 Exploring death, destruction and dissonance through the medium of puppetry was something of a trend at Edinburgh Fringe 2018. Cue: Famous Puppet Death Scenes, presented as part of the CanadaHub programme in association with Summerhall.

The central concept, as introduced by an older host (puppet) character, is that by showing us we will be better prepared to face our own mortality. There follow very many scenes featuring the deaths of puppets, and every moment of death makes the audience laugh. This must surely say something about the nature of laughter – it’s really quite noticeably weird. The set is impressive: an Art Deco styled construction featuring a central, curtained puppet booth and two smaller booths at each side. There is also a screen at the top displaying the titles of each scene, ostensibly by different people. Each scene is so varied in style and staging that it is impossible to get bored, and as the show proceeds we get some truly breathtakingly beautiful and haunting scenes. The soundtrack is artfully chosen to enhance the different moods, and the visual trickery is at times quite extraordinary, and will make you want to rush back stage and see how’s it’s done. It’s all so inventive and exquisitely realised – kind of like the Muppets meets Monty Python meets Tadeusz Kantor.

There are a few recurrent characters, especially an inflatable-headed man who meets his demise in a series of hilarious confrontations with a giant fist. In a psychedelic German children’s TV show called Ja/Nein, the young participants meet their grizzly end by making incorrect choices. Some are like cautionary tales, such as ‘Poor Edward who dressed as a Deer’, and others are more poetic and haunting. Later on in the show, a woman wheels onto the fore-stage a large pop up book that she opens page by page, zooming in the ever closer ‘shots’ of a farmhouse, accompanied by domestic argument. The realisation of this idea is simply stunning.

This  is a brilliant show by Canadian puppet maestros Old Trout: hilarious and mesmerising, and my favourite experience of Edinburgh Fringe 2018.

All shows were seen at the Edinburgh Festival Fringe 2018: www.edfringe.com