Upstairs at the Royal Court. You have to climb a lot of stairs or ride the lift to the tippety-top to reach this venue; leaving the bright lights and the loud industry laughter of the basement bar long behind you. Already it feels like we are going to witness something dark, something so special that it had to be been hidden away. We are sat on three sides along the edges of the room with a raised, jagged-edged stage that dominates the space. There is a mic on a stand that looks abandoned. A large circular hole is raised a few metres from the ground on the back wall. The whole space is splattered with white and silver glittering paint – it looks like the aftermath of a riotous gig.

The lights go down and it begins. Though Hole has a narrative arc it feels bigger than a linear story. It evokes all the feels. Lighting and sound are dominant characters leading and heightening the emotional landscape of the work. The lighting design is bold, flipping from the emotive colour washes of red and blue to harsh shadowy lines that emphasise and distort the bodies on stage. 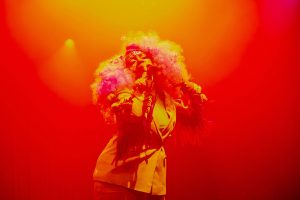 Hole opens with a classic, circular, theatre spotlight encompassing the abandoned mic: inviting a performer to stand within it. The spotlight is bold and aggressive, moving unsympathetically across the space, dictating where the performers should stand. One at a time they try to keep up with it, in order to tell us their story of sexual assault, in their own words. The accompanying sound is just as harsh: a ticking timer, with a buzzer indicating that time is up, cutting the women off mid-sentence, distorting the meanings of their statements.

I sit on the edge of my seat. I am excited. It feels different, dangerous and it makes my breath sink lower into my body in anticipation. A reversal of the #timesup and the #metoo movement: these women do not get to state their stories. Rather than the time being up for the perpetrators, we see the survivors silenced and literally removed from the stage as a section of the floor that they are standing on lowers to remove them from sight. But I know this is just the beginning, the prologue. I sense retribution is around the corner. 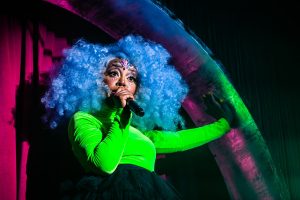 A portion of the stage is ripped away to reveal a large pink fluffy hole out of which the female ensemble emerge in large chiffon skirts. These are skirts that take up space but also allow us to see their bodies through them. The women we meet are angry. They are pissed off, and it is time for revenge, we are told. We are told they are bigger than us, that there are more of them than us and, using mics on leads, they tell us all of this through song. One of the women climbs up to the hole on the back wall and provides percussion accompaniment to the track.The music has punk-ish qualities not always caring about tune or sounding beautiful but intent in sharing a message. And I received it loud and clear. It is thrilling to see these women using their voices and bodies, responding to the music and lyrics with an abandon that feels like it comes from within rather than with any care to aesthetical feminine ideologies. The use of song throughout the piece, with the musical nods to punk and Afrofuturism, conjures thoughts of resistance and protest. Music has an ability to reach into our souls in a non-cerebral way and it is satisfying that Hole uses this medium throughout to reflect the emotional states of the ensemble. The piece travels through the Greek myths of Pandora and Medusa, using song, choral text, movement and dance to retell these stories. It often subverts them through the ensemble using recognisable female tropes such as the smiling bimbo or the saccharine-sweet dance moves of a girl band, highlighting the absurdity and abusive qualities of these stories.

We are confronted with the bodies of these women; we are given permission to look. One performer – a physically large, middle-aged white woman – comes on stage and delivers a monologue topless, baring her long sagging breasts. She is confronting us with the text but allowing us to see her body; to see herself. She remains like this for the rest of the show – moving, dancing, and fighting without constraining her physical body. It makes me feel wonderful. Her power gives me power. Her lack of fucks makes me question the fucks I often give. I feel grateful for her allowing us to see her and to love her like this.

The piece mirrors the astrophysical phenomenon of the creation of black holes and the rage of women under the patriarchy. A star put under so much pressure that it implodes to create a black hole that is such as massive pull of energy that it sucks in anything in its surroundings. We see the women under this pressure, we witness them implode and in turn become a black hole sucking us into their stories. 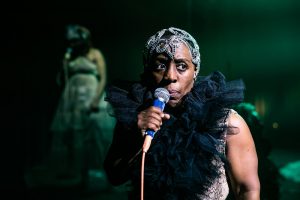 Hole is Ellie Kendrick’s professional debut as a playwright – as an actor, she is well known through her role as Meera Reed in Game of Thrones. Hole was developed at a Royal Court writing group in 2016 and inspired by Beyoncé’s Lemonade. It continued its development throughout the rehearsal and preview period, under the direction of Helen Goalen and Abbi Greenland from feminist physical theatre / music theatre company RashDash. The development of the piece continued to such an extent that the published text is quite different to the performed production (as is often the case with collaboratively created ‘total theatre’).

Hole talks of a rage that is growing within women’s bodies, the rage of not being seen, or heard. It takes us back to the misogyny within the Greek Myths, focusing on Medusa and Pandora. Through these stories we see how long this rage has been building. Hole often has the cast speaking, singing and moving in unison on that rage. This, however, contradicts the idea that we are first presented with, that women are growing and are taking up space, as although these women are taking up space, it appears to be in response to one particular aspect of female experience – the white female experience of the show’s writer and directors. This left me questioning if the piece does explore female rage or only white women’s rage? We see this singular intersection reflected again within the set design: the pink hairy hole that is revealed in the middle of the stage reminds me of a vagina, but of the colourings of a white women’s vagina. The ancient females we are told to reflect upon are white women – this seems at odds with the three Black women we see speaking and embodying this journey.  The cast often look out talking directly to the audience, demanding to be heard with their intense presence and their individual personalities within the work – this again left me confused as though we asked to engage and see these women, the text speaks to a singular experience that is not representative of the race of half of the ensemble.

In a post-show discussion Ellie Kendrick – citing Beyoncé’s Lemonade as inspiration for writing the piece – talks of Beyoncé’s rage as a woman in the music industry. Ellie doesn’t mention Beyoncé’s rage against being a Black woman in the mainstream; that Beyoncé’s Lemonade is a specific celebration of her racial identity. Ellie’s inability to articulate this, or to see the intersections of female rage through racial experience, seems reflected the contradictions and omissions inherent in the work exploring female rage in Hole.

The cast were a highly a skilled ensemble; physically, comically, musically and very present in the piece, ultimately they demanded to be seen and heard to such an extent that they outgrew the constraints of the text.

Hole was presented as part of the Royal Court’s Jerwood New Playwrights programme, supported by Jerwood Charitable Foundation. Photos by The Other Richard. 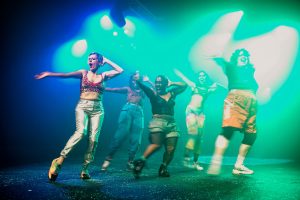