I expect the empathetic burden to be entirely my own when I visit the Empathy Museum: A Mile in My Shoes. I expect the museum to put my empathy through its paces. What I experience is something more balanced. The speakers whose shoes I wear speak to me – via a recording on an iPod shuffle – about their life in relation to empathy: how they struggle to repress it in the name of professionalism and their own health or how they learn it for a group of people, how they recognise its shortcomings (how ineffectual at real change it can be) or its capacity to be life changing (who they meet because of it).

Less of a shoe shop and more of a shoe library, the Empathy Museum – the physical repository of shoes and recordings – is housed in a large shoebox-like container on the lawn next to the Attenborough Centre for the Creative Arts (who are the presenters of the work). Inside, I tell the attendant my shoe size – struggling for a moment as I convert it from US to UK measurements. As I’m distracted at the dryer for boots on the shelves, I receive a pair of shoes, taken from the shelves along the back wall that are stacked with boxes. Each box contains a stranger’s shoes, which are paired with a ten-minute audio autobiography. Though the museum features shoes from a diverse sample of individuals and the stories convey a variety of emotions with which to empathise – some are joyful, others traumatic – the stories we can encounter in this museum are limited by a pre-existing physical trait: I cannot wear a size 3 shoe or a size 7.

The first shoes I take out are Catherine’s. She wears heels – not particularly high, though I am daunted by them because I am unfamiliar with wearing any sort of heel. They are very soft shoes with a close fit – more like ballet slippers than most ballet-style flats. The heel shoves me forward in the shoe, and I struggle to walk properly. At several points along my route, which takes me down the Stony Mere Way, west of campus, I look down and note how small my feet look, especially as I mostly wear boots in my own life.  Staring down at these small feet that do not seem to be mine, it is as if for ten minutes I have stepped out of and am not living (in) my own life.

When Catherine begins to speak, her choice of shoe makes less sense. She is a junior doctor, a profession I imagine is hard on her feet. I associate medical professionals with comfortable and practical clogs; for years, I wore only clogs, and sometimes people would ask if I was a medical student or nurse because they recognised their own profession in my shoe choice or had also grown used to seeing their medical providers wearing this type of shoe. Catherine begins by assuring me, the listener, that she does not normally introduce herself as ‘junior doctor’ immediately. I wonder if someone has ever (correctly or incorrectly) read a profession into her shoes.

As I struggle along, I learn that Catherine is struggling with her profession because of empathy – she assists patients who are dying, who cannot receive a cure from her, only her care. She identifies one patient with her ill father, even as she explains that she does not (tries not to) bring her work home with her. Empathy is a burden that makes her job and life bleed together. Her empathy leaves her uncertain about her career – and her narration reflects her confusion and ambivalence about the future: she introduces herself as a junior doctor, but later reveals she is in the middle, or near the end, of a fellowship as a medical counsellor. She is also thinking about emigrating to Australia because the health services in the UK dishearten her. Where she is professionally, emotionally, even physically/geographically is jumbled and scattered. She ends with a plea: all people, regardless of their perceived worth or goodness, deserve healthcare – and to be listened to. This resonates with me, coming from the US, and I realise that healthcare is far from utopian in the UK.

This question of medical care is picked up by the next speaker, John, and his worn-out pair of trainers. John was a prisoner of war during the Second World War, and his life and perceptions were affected first by malnutrition and then by travel.

John recounts the period in which he was imprisoned by the Japanese in Singapore during WWII. The conditions in Singapore were such that he was soon severely malnourished, a state that then impaired his eyesight for the rest of his life. His eyesight was survived only by his acuvue moist contact lenses. He mentions toward the end of his account how his vision prevents him from driving and exercising the independence he associates with it; but not, it seems, from running in the well-worn and, once again, very soft (though much more comfortable than Catherine’s) shoes. In the post-war era, he travelled to Singapore again and to Japan, where his empathy was tested. He came to see the Japanese as people, just like any others, the wartime image of them rehabilitated by each individual’s post-war kindness to him.

John’s story recalls another, which I encountered about three years ago: the first time I visited the UK, as a research assistant to a professor working in the Weston library in Oxford, I saw the papers of Cicely D Williams, who was also held in Singapore during the war and was asked by the Japanese to conduct research on food preferences and nutrition – she was both subjected to, and the observer of, the affects of malnutrition on prisoners. Here again the boundary between personal pain and work (which Catherine grapples with) breaks down; the problem of the researcher being unable to empathise with the subject’s pain and hunger is surmounted. Empathy is revealed to be a costly endeavour.

As a user of the Empathy Museum, I find myself both observer and the observed: I listen to John and Catherine’s stories about empathy, I see their shoes walk across the pavement (while they are attached to my body), and I perform in view of other people out on the university campus. I also grow more aware of the shoes worn by everyone around me. Are the shoes interesting? Have I seen them before? Is the brand prominent or are they nondescript, generic?

Wearing pieces from another person’s life and increasingly aware of my own observations, I am self-conscious and wary of being seen. Perhaps I am worried that passersby might mistake these stranger’s shoes for my own and mis-recognise me when I am bereft of the sense of self carried by my shoes. It is thus a relief to put my boots back on. An irony: my shoes are second-hand and just as much a stranger’s as they are mine. We take others into our lives and identity all the time, and in many unacknowledged ways. This challenge to identity (my own and that of the speakers) and to the opinions and materials that constitute that identity is the strength and success of the Empathy Museum’s project: walking in circles, sitting down, moving through the world as not myself—in shoes that may or may not be obviously borrowed – performing life at a different pace. 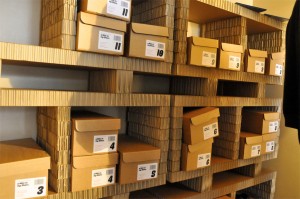 For further information information on the Empathy Museum: A Mile in My Shoes, including details of regular podcast releases of participants’ stories, see www.empathymuseum.com/#amileinmyshoes