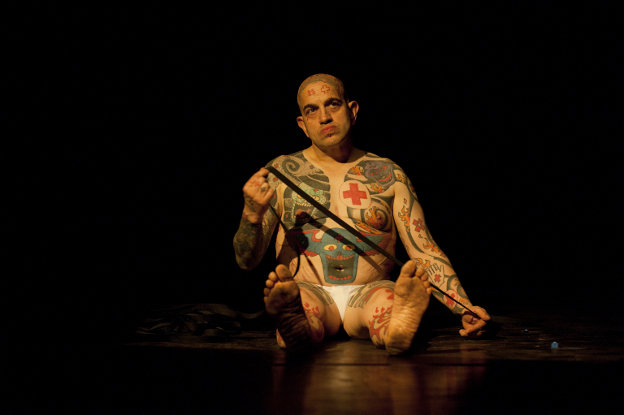 Franko B’s Because of Love is the closest encounter I have had with Joseph Conrad’s Colonel Kurtz to date. Like a seemingly disciplined inmate, the performer paces up and down along the celluloid wall of his recollection cell, readying himself for a confrontation to come rather than sparring with images of televised conflicts, military parades or 1960s adverts that numbingly rub our eyes. Franko B makes scant effort to blend with the projected images; he just goes on with his little exercise routine as the political and religious leaders of a not-too-distant world parade one after the other on the screen: protesters are endlessly being chased by the police, or little boys dutifully re-enact the Vietnam War with toy guns and cannons.

Then, all of a sudden, the somehow comforting repetition of images on the screen makes room for the uncanny as a heap of foxes’ carcasses with marble eyes are brought to the fore. The moving collage is replaced by a heavy classroom blackboard upon which Franko B traces a dividing line with chalk – it could well be an ‘I’, not in the form of a statement but rather as the mark of an irreparable split, or irreversible wound. Then, three more words hastily traced and the drawing of an empty house. Between each word: immeasurable silence and scrutiny. Who could hold up to Franko B or the foxes’ gaze? My eyes wander to his tattoos; he wears a plain white vest and shorts. His sweat is almost palpable, he is still a little breathless from running. Ultimately, the attraction to the dark ringed eyes proves ineluctable. Some people look away, but I long for his eye contact. When it occurs, it feels like peeling off layers of images imprinted on his retina and mine, all the images we have seen on the wall just before, plus a myriad of others. That is the idea that I cling to perhaps to gain countenance or to make sense of the event. I end up lowering my gaze and his eyes slowly fix upon somebody else. This is when I understand that this is not a confrontation or even an encounter; before my eyes lies a desolate place, a void, an absence amidst futile moorings to borrowed memories.

Franko B kneels on the ground, arms up, as an unnerving childish melody sings snapshots of life – his own or not. He then pulls on an endless fabric cord to drag a metallic bed on stage, but threading memories leads only to unrest and fall: he sits holding a hot water bottle close to him only to quickly discard it, lie down and fall from the bed again and again, faster and faster until it hurts and the movement dissolves. Finally, he sits facing the screen, his back to us, alone, until an animatronic polar bear joins him to watch images of Laika, the first dog sent to space – a journey which strangely invites us to join them on a reverse trip into animality. At last they dance and humanity is restored, if not redeemed, through love. Because of Love is not easy to evoke, even less so to forget. At this intersection between performance, theatre, dance, video installation and sculpture, Franko B might well have found temporary sanctuary and the audience seems to be here to mindfully attend and consecrate that space rather than to witness the unleashing of the culture-trapped beast. Humbling.