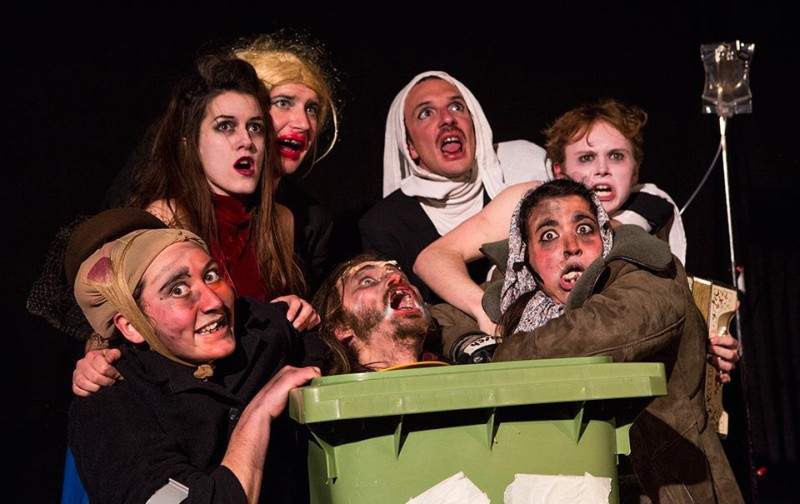 Performed in a bouffon clowning style full of grotesque expressions, costumes, and make-up, this piece communicates clear social commentary on the treatment of the elderly and institutionalised. It features five such clowns, who thank us for coming with a gift of chocolate, and welcome us to the play they are putting on. They regularly address the audience directly, usually sporting demented grins and often breaking into parodies of well-known songs.

Set in the Happy Valley Care Home, the main storyline follows an old man suffering from dementia who receives very poor care. Intriguingly he is named Mr Whitey and is personally attended by a latino-sounding carer called Raul. He has a strangely sexual encounter with the home’s money-obsessed manager, and receives a visit from his horrendous daughter who’s keen to gain power of attorney, clearly for financial gain. In short, all the characters are horrible, with the possible exception of an ADHT sufferer in a straightjacket Mr Whitey seemingly befriends. This second character provides the additional point that it is not only the old but also the odd that society has little consideration for.

The performance certainly aroused a good deal of laughter amongst many people in attendance, and the performers all turned in clearly competent and engaged performances. Bouffon clowning involves a troupe representing an ugly, disfigured underclass who entertain their superiors with a clear vein of subversive mockery, like the figure of the cackling hag long past caring who mocks the vanities of the beautiful. We see fat bellies, bare breasts, and several spates of simulated fornication. This grotesque style certainly provides an effectively uneasy fit with the content, shifting between madcap slapstick into the poetic and poignant. From laughing at the grossness of the situations – like an old man defecating whilst trapped in a wheelie bin – one is suddenly aware that such practices are not far beyond actualities, and how awful that must be. The show effectively points out how we are all implicated in a collective wilful ignorance that places the elderly ‘out of sight and out of mind.’

If all that sounds a bit worthy don’t be put off – it’s not preachy but an entertaining and engaging use of a particular style of theatre to communicate a particular theme. The final scene involves an absurd and irreverent yet strangely beautiful tableaux representation of the crucifixion, as Mr Whitey’s life comes to an end. The lighting design really gives this scene its power, and is excellent throughout the show. The set design is also a strong element, comprised mainly of an asymmetrical shed structure with various windows and flaps, and sides that open out to form a backdrop. Overall, there is much to admire in the ambitions of this production, which also involves a collection at the end in aid of a Huntingdon’s disease charity.