Rob Young documents his love-love relationship with Ridiculusmus, who he works with as special projects producer

It took me 20 years to find the right company. I took the scenic route.

Let me set the scene. Me, short body, big head. I looked like a child’s drawing. A child who couldn’t draw. I grew up in a town that was dark, cold and didn’t have any vegetables. Or art. To get any (art that is, not vegetables) you had to tune in to the outer regions of BBC2 in the hope of finding something weird. French crap at 3am. I loved it. All four hours of it. For the rest of the year, I just hung round the streets, fighting and drinking, then a bit more fighting for dessert. Fifteen youths, all of them ugly, wondering why we didn’t have a girlfriend.

Then a girl bought me a theatre ticket. The London Contemporary Dance Theatre. I sat there in the audience, surrounded by posh people, watching this dancer, more elf than human, jump the air and hang there, frozen. I leant forward in my seat, praying she would land on me. And a thought burned inside my head, I’m in the wrong gang. I shall run away and join the ballet. The problem being, I couldn’t dance.

But I’m a realist. I knew that if I couldn’t be someone sexy, then at least I could stand next to someone who was. And if I stood really close, maybe some of their talent would rub off on me. That was the plan. So I upgraded my previous ambition, to own a colour telly, and headed off to the bright lights of London – to make my fortune, in the arts.

I failed, miserably. London turned out to be one big crummy suburb. A bit like Up North, only bigger. A degree in theatre design was equally disappointing: think me lifting heavy objects. Lots of grunting, not much art. Again, a bit like home. Same with performance. I got a bit part in one show, shovelling crap, while a 30-stone woman spouted nonsense, in the nude, covered in chip fat. Exactly like being at home.

I yearned for performance that would move me, engage me, grab me by the lapels and give me a great big snog. I sat through literally hundreds of shows yearning for something with: 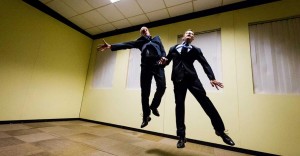 Little did I know that just round the corner, two young men were fusing the three to create GREAT ART. They called themselves Ridiculusmus, from the quotation by Horace, ‘Mountains move in childbirth and a ridiculous mouse is born’. I love that. Spanks the pants of my previous favourite, ‘Everything has an end, only the sausage has two’.

For those of you lucky enough not to be familiar with their work (and therefore get to experience it for the very first time) Ridiculusmus are a robust double act of veteran performers, bordering on the genius. Or, as The British Theatre Guide puts it, David Woods and Jon Haynes, ‘are without doubt two of the most innovative talents in British Theatre’.

Like me, the boys came from humble beginnings. They even studied at a place called The Poor School. For while pursuing a career in Avant-Garde Performance is a hugely commendable ideal, it comes at a price. I became homeless, and they slept with rats. Hell, one of them even died, briefly, till he coughed his way back, for the sequel. It is this grit that defines them. That inspires.

The trouble with being a lost soul in London, pre-social media, was the sheer isolation. Pursuing a career in the arts was, is, and always will be a tough call, especially if your work has a strong flavour. The temptation is, to sell out. Sure, take a job as an intern, stack shelves, flip burgers, who hasn’t done that? Or if you’re really lucky, land a plumb job as Assistant Assistant to the Assistant Associate, but once you start selling off chunks of your heart, all your integrity evaporates. But, to their credit, and mine, we stuck at it, slugging away at true-grit performance, year after year. And year after year, we got better.

For fuel, I had heroes. Like Simon Vincenzi. This cormorant among pigeons makes work as dark as any sexual fantasy, even yours; and Christian Boltanski, who still makes me cry to this day. If I just say the first five syllables of his name, I start to well up. And who doesn’t love Guy Dartnell? Mat Fraser? Catherine Long? Just when you think that the world’s gone all cheesy, up pops someone with a brain. 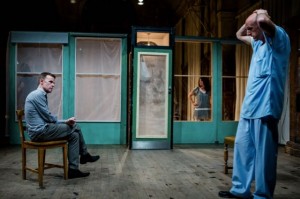 Around this time, Ridiculusmus were clocking up some incredible shows. For Yes Yes Yes, they spent time in an Indian asylum, to emerge with a show that The Guardian described as, ‘One of the funniest and saddest things I have ever seen’.

It had a remarkable ending. When seen at the Barbican, Jon chased David off the stage, through the foyer and out of the building. The audience watched this ‘live’, on a screen. The live footage then seamlessly cut to a pre-recorded film, that showed the chase continue around the world. The audience roared as Jon chased David through Paris, Sydney and even past the Taj Mahal. A simple idea but executed with brilliance.

While I was fluffing about writing dodgy poems, Ridiculusmus had unearthed something wonderful: the distilled essence of what it is to be human. Audiences from Melbourne to Tokyo gorged upon the work, which went on to win a clutch of awards – including the Total Theatre Award for Best British Production at the Edinburgh Festival Fringe.

Ridiculusmus don’t just do absurd; it’s fused into their DNA. For example, their show Ideas Men is about two men, who have no ideas. Living proof that if you aim to fail and succeed, it’s a success. It was performed from Brisbane to Ballachulish, Honolulu to Llanfair-ym-Muallt.

Even when Ridiculusmus took on a classic, the results were anything but conventional. When Jude Kelly, now director of the Southbank, directed The Importance of Being Earnest, the boys played all of the parts, including Lady Bracknell. It received standing ovations all over the world.

So where was I during all this euphoria? I’m sorry to say, I sold out. Lured away by the shiny veneer of film and TV. A world where nice people say nice things like, ‘Would you like Tamsin to nip out and get you a latte?’ or, most lovely of all, ‘I’ve paid your invoice’. For a rough kid, from Up North, it felt like I’d landed in Heaven. I’d thoroughly recommend it, for a while.

Then one day I looked in the mirror and I wasn’t ugly any more. I was a glossy professional with George Michael hair. I still drank but couldn’t be arsed to fight and besides, I didn’t need to, I’d learned how to negotiate. I saw shows that cost a lot of money but no one cared, not even the audience. It had been a long and perilous journey but after a 20-year quest, I had finally arrived… at the wrong destination. I’d sleepwalked into the spa when I was searching for a bullfight, or whatever the vegetarian option would be. Time to take off the fat suit and pick up that cape.

I had tried to buy a ticket to a Ridiculusmus show once before, when How to be Funny sold out the Barbican. I mean, honestly, who sells out the Barbican? That’s just showing off. 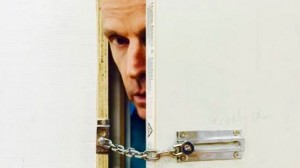 Then earlier this year, I attended the Conference of Psychedelia in Greenwich (don’t ask) where I stumbled upon a modest little show called, Give Me Your Love. By Ridiculusmus. About the shocking use of ecstasy in treating post traumatic stress disorder (PTSD). Which doesn’t sound funny, but is. I didn’t know if I was laughing or crying but who gives a toss? It was wonderful.

It tells the story of Zack, a war veteran who finds himself under a barrage of hostile fire. His enemies are cunning, using every trick in the book to mess with his mind. Even the landscape is weird. It’s a cardboard box, in Zack’s kitchen, in Port Talbot.

During the development of Give Me Your Love, Ridiculusmus worked with American-based doctors and war veterans who shared their experiences of a therapy using MDMA (‘ecstasy’) to assist in the reprocessing of trauma in cases of treatment-resistant PTSD. They also collaborated with Steve McDonald, an Australian-based war veteran whose organisation, PRISM, is lobbying for MDMA trials in Australia. This is not just art for art’s sake, it has teeth.

Only a company as bonkers, and brilliant, as Ridiculusmus would produce a work where one character spends the whole show in a cardboard box, while the other one remains off-stage throughout. It’s Beckett, 2.0. You should go. See it.

Give Me Your Love is the second instalment of Ridiculusmus’s three-pronged investigation into innovative approaches to mental health. Informed by the latest scientific research, it explores the healing potential in altered states of consciousness.

The show premiered at Arts House, Melbourne in November 2015 and came to London for a three-week run at Battersea Arts Centre , 12–30 January 2016, followed by a short UK tour.