Rebecca Nice enjoys a day out at the Greenwich Fair 2015

Greenwich Fair – records of which date back to the eighteenth century, with famous past visitors including Voltaire – remains a highlight of London’s summer scene, both for those who seek live outdoor performance, and those who revel in a fun family day out. In recent years, the Fair has been a vibrant part of the annual Greenwich and Docklands International Festival, which also embraces the Dancing City programme; and evening spectaculars by companies such as La Compagnie Oposito, presenting the UK premiere of Kori Kori, and Periplum’s 451, reviewed here. 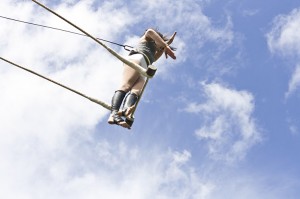 Arriving at Greenwich to find hundreds of people utterly absorbed in a circus trapeze act revolving around a caravan installed in the Cutty Sark Gardens sets the tone for the day to come. The audience spans the entire paved area below Collectif Malunés’ trapeze, whose performers swing high up to the heights of the ship in their piece Sens Dessus Dessous. Amongst the frivolity of a fair with food, drink and sun in abundance, high quality outdoors arts – theatre, dance and circus – remain at its core. Greenwich Fair is always well organised with plenty of volunteers to hand, with clearly marked performance areas with signage for each show, and 2015 is no different. With the majority of the programming scheduled around the Cutty Sark and the Royal Naval College Gardens, it is gloriously easy to wander from one show to the next and discuss the latest viewing with friends over a cocktail by the river. So, mojitos in hand, we find Gandini Juggling Company and marvel at Belgian circus company Collectif Malunés’ tricks and turns in the air, looking down to a sea of faces, while Gandini’s six performers unpack their skull, feathered mohican-style baseball helmet, and juggling balls, ready for 8 Songs. 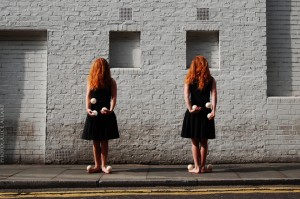 A rabble of six rock-star jugglers strut, thrust and sing to eight classic rock music tracks whilst nimbly controlling the spinning, flying, arching and rolling balls. Audience and performers alike enjoy revelling in the catchy tunes (which includes tracks by Bowie, Bob Dylan, the Beach Boys, The Velvet Underground, and the Rolling Stones). 8 Songs easily pulls in the crowds, who are then mesmerised by the magnetism of the juggling and more and more people arrive to bop along. 8 Songs, one of a number of Without Walls commissions for 2015 presented at Greenwich and Docklands Festival, is delivered by a team of performers that doesn’t include company co-founders Sean Gandini and Kati Yla-Hokkala – offering the chance for talented younger company members to shine. The delicate art of juggling is juxtaposed with the sexy stance of a typical rock performer in studs and leathers, holding a juggling ball in his crutch, giving a stylistic complexity that parallels the detailed musicality driving the juggling scores. As each ball peaks in momentum in the air, it does so on a beat of the music, as with every catch and release. This creates a composition where the balls quite literally dance to complex guitar solos or popular melodies. Duets where balls circle in front and behind both performers placed on a chest, or swopped from hand to hand, are laced with sex and attitude. The Beach Boys’ Good Vibrations showcases six-ball crescendos that create fountain-like plumes above the performer’s heads. Chris Patfield masters a spinning basketball, then proceeds to spin two further balls on top. He commands his objects in a way that is indicative of Gandini Company as a whole – like mini planets that orbit the performers controlled by an invisible force. Spellbound by the kaleidoscope of yellow balls, ever flying ever catching, it is only on the odd drop that the audience is reminded of how skilful and risky the juggling sequences are, and it is the art of the throw and the catch and not a magnetic force that keeps these objects in orbit. Building to a climactic finish, Gandini’s jugglers freestyle in a silent disco, eventually leaving their balls, and clothes, strewn across the stage. 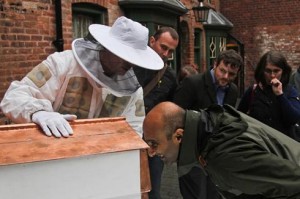 On being released back into the Greenwich crowds, meandering about the Royal Naval grounds – this time armed with strawberry daiquiris – there is time to purchase festival flowers for the hair and check out the menagerie of installations on the lawn. Artizani’s Bees! The Colony lets you peer into a series of hives with their own sound effects and miniature bee scenarios, from racing bees to witty cinema scenes. This would be a great starting point for a more extensive immersive theatre piece – but with such a full programme of performances, easy-going features that allow you to appreciate them at your leisure are a welcome break between shows. A wandering Reliquary – a bejewelled casket containing who-knows-what – is trundled past by Avanti Display, but there is frustratingly not enough time to chase it before settling down for a good suntan and the next show on my schedule. This mystery walkabout piece and the Artizani installation are both part of the Without Walls programme for 2015, and touring to many of the country’s major outdoor arts festivals – Hat Fair will be another opportunity to discover the secrets within! 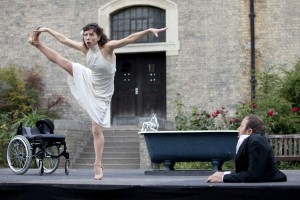 Louder than Words by Cathy Waller Company features a central sound artist, Christopher Preece whose hodgepodge of instruments, some appearing to have a home-made quality, are highly technical and fascinating. Contemporary dancers Yukiko Masui and Gareth Mole perform a grounded and physical set of phrases in continuous circular motion about their body, and wider about the musician. Their dynamics are aggressive, their gesture and floor pattern expansive, but their relationship with each other ambiguous. As they circle their sound artist, they draw attention to his trance-like minimal chords but the choreography focuses heavily on the steady beat without picking up the nuances and rhythms emanating across the Cutty Sark gardens. Highly skilful in both dance and music, a disconnect between the dancers and the central figure pulls focus more heavily towards the talented musician who steals the show.

A picnic lunch is eaten before a giant pendulum – Travelling Light Circus’s Pendula Fantastica, an oversized Newton’s Cradle that feels especially suited for Greenwich, the home of time and space. The pendulum hypnotically swings through an array of patterns, the giant silver balls in constant momentum in the sparkling sunshine. Lunch over, we join the crowds grouping by the ship for some bounce and jollity.

Bill & Bobby, by integrated dance company Stopgap, is a cheerful duet to a series of musical theatre soundtracks. Playing drunken fools, Amy Butler and David Toole bounce in and out of a bath, share limbs and hide body parts whilst ironically turning Fred Astaire and Ginger Rogers’ lyrics  ‘No one could teach you to dance in a millions years’ literally on the head. Butler’s dance vocabulary is well executed with a tottering top heavy stance, and facial expression ranging through drunkenly sickie to flirtatiously cheeky. Her relationship with Toole is both silly and endearing, his strength and dexterity in travelling on his arms and his embodying dynamic is rhythmic and masterful. A tap-dancing section with no visible feet has potential for an intricate choreography with the hands in order to more fully interpret the tune set by the tapping soundtrack. Both of these characters relish in the overblown enactment of Fred and Ginger lyrics – a snappy and chirpy piece that brings laughs and a light-hearted nature to the programme delivery, now in full swing in the sweltering heat. 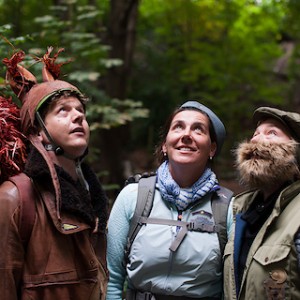 Presented by leading Flemish children’s theatre company BRONKS, Walk Walk is located a fifteen minute walk away in Greenwich Park – well worth hunting down for a funny, absorbing and captivating family show that is sophisticated in its approach, with much for an adult to enjoy. Waiting in the well-kept park for the arrival of the ‘hiking guide’, a startled audience jump as a beeping car pulls in behind them in the middle of the lawn. From out of it disembarks Rebecca, a bundle of nerves and excitement, with a running commentary of her thoughts and events that led her to be late for her tour. Immediately the scene is set for a series of surprises, and it is hard not to empathise with Rebecca, who keeps us emotionally involved with her plight throughout.

Guided through the forest, we are treated to an air hostess style introduction, and a race to name the trees, alongside passionate warnings of the dangers that the wood holds. The physical embodiment of character informs the demonstrations of forest animals and hazards. The re-enactment of the Red Fox and the position of its body and the height of its spray is a particular highlight, full of innuendo. Taking place in a nature reserve, the nature under discussion has little relation to the existing site, which sums up the nonsensical themes of this work in a world where the grown-ups fully commit to searching the floor for a make-believe insect with a magnifying glass! (We did it for Rebecca, she has an exam the next day with the Grand National Guild of True Hiking). Two more performers reveal themselves as the unsuspecting tour guide and her faithful audience tour the forest. One performs a monologue from high up in the trees, another appears and disappears as several characters who interrupt Rebecca during her important task. Her character’s tenacity, passion and expression that allows the audience to follow the transformation of her thoughts that occur as the narrative unfolds make Walk Walk thoroughly engaging – the skilful mispronunciation of words, the failed activities, the physical demonstrations and the series of mini tableaus and sketches within a grand narrative entertain and hold the audience’s attention. Walk Walk brims over with surprises, humour, spectacle and a new immersive reading of the Greenwich Park site – the perfect way to end the day at the Fair. 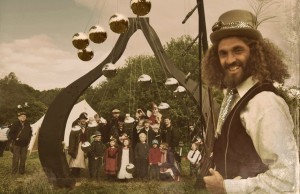 For more on Greenwich + Docklands International Festival 2015 see the website.