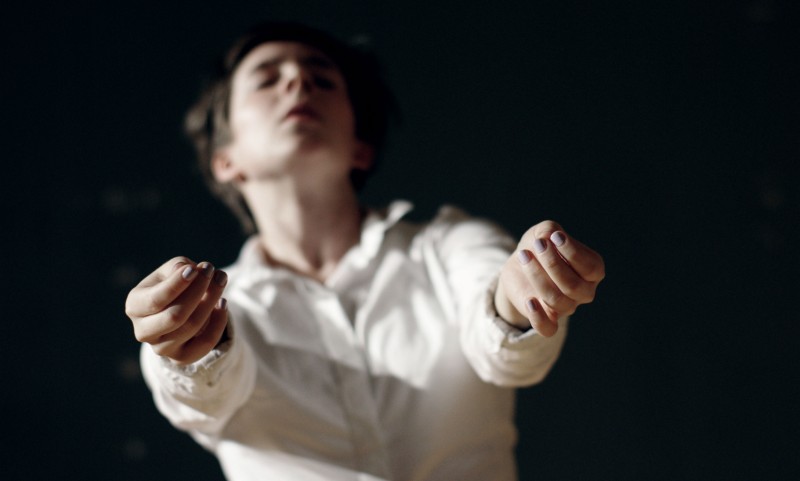 Hannah Sullivan has been collecting the way people dance. Looking and logging individual attitudes and details, storing them away to put into her show. In the way you dance is both a revealed intention and a great deal which you unintentionally reveal. We get to watch Hannah snap between portrayals or gradually find the next dance, and each time we see an almost-complete character: suggestive, sexual, introverted, absurd, mystical, abandoned, wild, and controlled. Arms that flail or are held tight, and the eyes open or closed, tells us more than the dancer knows.

These physical vignettes have been lifted out of the crowd, out of context, and presented to a selection of excellent songs they evoke the question of what it is to be seen by another, how we define or describe our relationships through movement. The gap between the dance culture of a much older generation hints at a lost structure to dance. You had to learn how to dance, you expressed yourself within a prescribed form, rather than wigging out like a flailing maniac (my preferred approach on the dance floor) and there is a tenderness to the way we can visit that lost world of formality.

There are a few sections where the images didn’t speak as clearly or vividly as in others, sometimes Sullivan lost contact with the audience or her own breath giving a stilted feeling that might have been smoothed with a fuller presence. I had the feeling that the show skimmed along the surface of its potential and I wanted Sullivan to dive deeper in the way she played certain sections, which is nothing more than committing fully to the ideas or emotions she was presenting. There are some great comic moments both in the dances and the material which comprises the majority of the second half.

There is a shift half way through the show from looking at others, to her own relationship to music and the way that dance so clearly revealed the relationships of her parents. The way people dance with each other tells a story: perhaps they are dancing towards one another or perhaps they are separated, in the same room. There is plenty of humour and pathos in the work and it speaks of Sullivan’s desire to observe and express the world she sees around her.