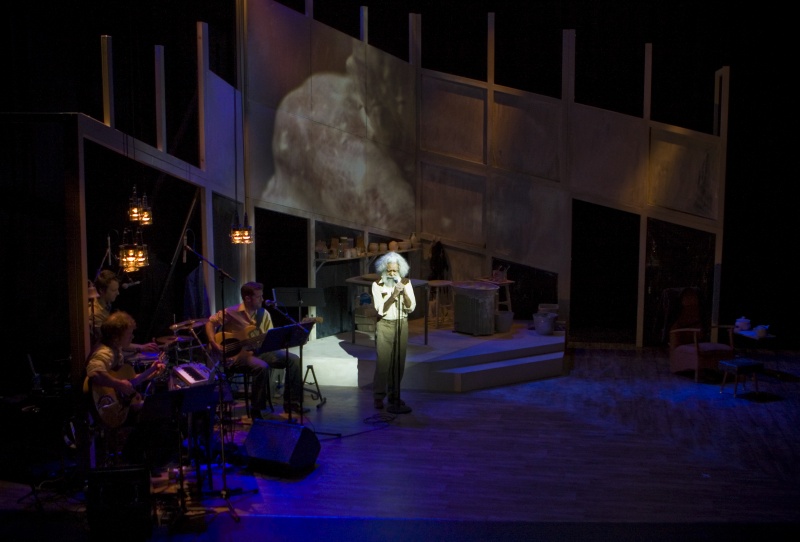 ‘I’m with those who haven’t bloomed, haven’t blossomed, who make wrong choices,’ says Jack Charles. His past is laid bare in the opening sequence from the biographical film Bastardy (2008), in which he nonchalantly injects heroin. The film’s tagline was even blunter: ‘Addict. Homosexual. Cat burglar. Actor. Aboriginal.’

This stage version is more nuanced, combining projections, live music, gentle conventional narrative, and pottery. A train hooting anticipates a visit by the Queen, whom the enthusiastic young Jack Charles greeted as family. Later the union flag is spat on and used for dusting, to polish a mock tombstone inscribed with just ‘CRN (criminal record number) 3944’.

Charles’s story hits home most when it’s combined with cheerfulness. His upbringing as the only Aboriginal boy in a Salvation Army home includes a childhood sweetheart, marching songs, gymnastics and parties, all seen through black and white photos. A thematic approach means the abuse is revealed gradually.

The toe-tapping three-piece band adds a great deal. The electric violin is a far cry from Hearts and Flowers, sounding more like an animal wail across a desert landscape. The musicians are definitely in tune with the storyline, not just when they perform jazz standards with the protagonist.

Jack Charles was incarcerated 22 times, often coming out of jail for six or nine months only to go back for two and a half years. He offers a ‘heartfelt apology’ to those from whom he stole ($26,000 and some Gucci in eight burglaries), but actually the show is unapologetic and righteously angry.

Autobiography is a tricky genre, opening the door to introspection and self-pity. Jack Charles v The Crown steers a steady course through this. It’s documented, to the extent of including a report on his post-traumatic stress disorder, but also with historical evidence from 19th-century Australia. It’s also well-constructed as a multimedia narrative.

However, as an actor, Jack Charles’ career really was cut short by prejudice and addiction. This manifests itself in a sort of hollowness. His ‘acted’ scenes, recreating his life as a performer, fall slightly flat, which could be evidence that we have been drawn into the story, believing the bulk of the acting to be real. Sometimes he comes across as an overanimated dinner guest.

So despite the honesty, worthiness and skill of the presentation, there remains a nagging doubt. The show is entertaining, but the price for this entertainment is uncomfortably high. The symbolism of the clay, the pottery, creation is clearly opposed to the tombstone and self-harm, but there’s no clear winner.