‘Regret nothing’ is a great life motto for some, but I still curse myself for leaving Jenny Hunt and Holly Darton’s SICK! Festival Café minutes too early one lunchtime in March 2014. My sister-in-law had just courageously selected ‘I Am The Buffet’ from the daily Set Menu, and soon found herself lying on the table being pelted with salad by merry, if bemused, customers. Sadly no photographs exist, but the scene haunts both her memory and my imagination. You don’t get that in your local Costly Coffee Shop – but there again, Hunt & Darton’s is no ordinary café…

During 2014 and 2015, Hunt & Darton Café set up shop in seven UK locations, supported by a Strategic Touring Grant from Arts Council England. To conclude the project, Hunt and Darton held a free Symposium to share their experience of the tour with others. Did they hold it in a café? No, demand required the grand theatre at Toynbee Studios, hosted by Arts Admin. In the course of three hours, with a break for tea and Tunnocks, the Symposium provided an illuminating overview of their work.

I’ve had the pleasure of attending Hunt & Darton Cafés in Brighton and Edinburgh, and was eager to discover more about how the project had developed, its artistic and social ethos, its impact, and what the future might hold for the company. On the Symposium menu were talks by contributing artists, collaborators and commissioners. 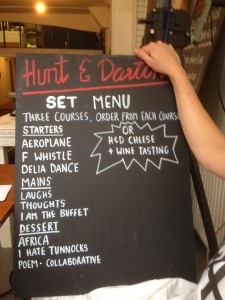 Hunt and Darton opened the session showing images of venues that had hosted the Café – highlighting the consistent elements that each contained, customers, key events and some photographs of the food they served – before handing over to the invited speakers.

Documentation rarely looks so good. In essence, Hunt & Darton Café is, in their words: ‘An interactive performance/installation and fully-functioning pop-up café.’ The idea emerged at a camping retreat with fellow visual artists Rachel Dobbs and Hannah Jones of Low Profile, who have since made artworks for the café, and created the loyalty schemes, of which more later.

Idea in place, it was with the support of the first speaker, Anthony Roberts, director of Colchester Arts Centre, the Live Art East Collective, and the Escalator East initiative, that they launched the first Hunt & Darton Café at the Edinburgh Festival Fringe (as part of Escalator East to Edinburgh), followed by subsequent visits to the Fringe and to other cities. Over time it developed from a café run by artists, to a café with a performance space and guest artist/waiters.

From the start, Hunt and Darton, who share a background in both visual arts and intermittent catering jobs, wanted the café to be somewhere that fulfilled a physical need – hunger, thirst, getting out of the rain, resting the feet – as well as a creative need they might not have known they had: a place where the public is invited to participate in or initiate a creative event, contribute to an artwork; to be performer or audience. 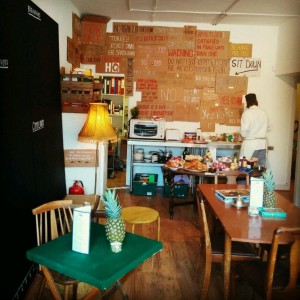 Customers’ expectations are challenged through the style of the service. Hunt and Darton present a dead-pan, slightly severe authority in their role as Café proprietors. This is no-nonsense service that somehow puts a customer at ease while instructing them, often quite firmly, on where to sit and what to do. The formal personalities of the staff contrasts with the novelty of their uniforms – pineapples on the head, bright ‘Lady Danger’ lipstick, fruit patterned aprons – and with the kitsch aesthetic of the Café design. Over the years, Hunt and Darton have trained other artists to be surrogate Hunt and Dartons, adopting their outward characteristics. Artists may go through an Academy process, which, rather like a franchise, allows Hunt and Darton some time off, and more importantly extends the experience for artists and customers alike.

The performance troupe Figs in Wigs are long-term Café associates. They demonstrated ‘Service at lightning speed, delivered at a snail’s pace’ – a fast and slow relay run with plate of peas as the baton. They then invited Hunt and Darton to try and beat the world pea-eating record (they failed).

Guest waiter Brian Lobel took this further in his performative contribution to the afternoon. He told us that his key interests were food and customer service and that, when performing his often highly personal work, he realised that most people were thinking about themselves. Brian finds this interesting rather than annoying; he is keen to hold the space for them. So for Hunt & Darton Café at SICK! Festival in Brighton, he offered customers an exchange, as demonstrated with an audience member, that could easily move you to tears. As someone who has participated in Brian’s work several times, I can appreciate how challenging this approach might be for a drop-in customer with a pot of tea and a crumpet, and also how life-changing and memorable. 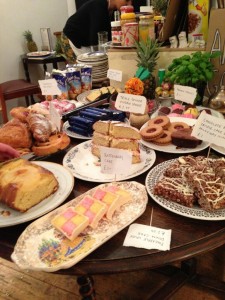 Food is obviously integral to the Café and, in collaboration with chef and artist Max, the menu offers a brilliantly twisted range of things toasted, unduly elaborate cakes, and retro shop-bought snacks (such as the legendary Tunnocks Tea Cakes, or perhaps a Mr Kipling Fancy). Everything is tasty, tea is served in pots, and price points are fair.

There is Art on the menu too: Community Day, where customers sit with strangers, do jigsaws, share trifle; and Health and Safety day when hair nets and rubber gloves are obligatory.

So how can this model function in a commercial setting? Hunt & Darton Cafés distort and disrupt the normality of a café by placing equal value on the art ‘on sale’ as the food and drink. Figs in Wigs’ Rachel Porter read a paper entitled The Service Economy of Hunt & Darton Café’, which made interesting connections between how art functions within commercial enterprise, where the art or the performer is the commodity. Like Brian, she referenced the relationship between hospitality and performance; the Café brings art into a workplace, and makes a workplace an artistic happening. Initiatives like Open Barbers – a community interest company and regular pop-up at Duckie, and Say Cheese which delivered themed meals alongside a Martin Parr exhibition in March 2014, offer a similar bridge between commerce and art. Somewhere there is a wax sculpture made of my hair, courtesy of barber and sculptor Stuart McCaffer (Summerhall, Edinburgh Fringe 2014, £10.) There are those, in government right now perhaps, who would be happy for all art to be commodified and price-tagged. But, as Jenny later explained, while the food part of the business might break even, the art has to be subsidised. To make this crystal clear, all transactions at the Café are chalked onto blackboards, by customers and staff; the profit and loss is transparent, the responsibility shared. We give and we receive. 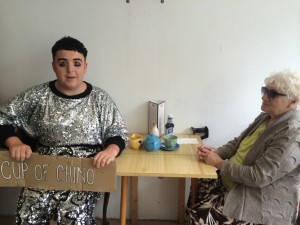 At the heart of the Hunt & Darton Cafe ethos is the audience-cum-customer. It’s all about us. This manifests most clearly in the loyalty scheme, outlined for us by Rachel Dobbs of Low Profile. It shares several characteristics with the familiar Nectar or Boots Loyalty Card, but in adopting the style of a name badge, simply saying LOYAL, it is also a conversation point and a badge of honour. Low Profile later created KEEN, a framed word-piece for anyone who travelled to several of the venues on tour. One proud couple visited four.

Daniel Pitts, arts producer at Cambridge Junction described how big an impression the Café had on the public in his region over three successive visits. In China, which Hunt & Darton Café visited courtesy of Forest Fringe and The British Council, people thoroughly enjoyed the disruption the Café brought to their lives. Forest Fringe’s Andy Field wondered if he was exporting something quintessentially British, and if so, what? He discovered that what the Hunt & Darton Café offers is not an obscure, nor fundamentally British commodity – it belongs to the space it visits.

You can see the happy faces of customers on countless Facebook pages and websites. It was down to performance artist Scottee, after the tea-break, to flip the coin. His learning, from two years on the road with the Café, was that England ‘was and always will be a poxy shithole.’  Scottee is furious that we, the public, allow this to be and do too little to incite change. He wants a revolution.

In the final artist’s presentation, Richard DeDomenici screens an ‘audio visual extravaganza’ of the life of the Café. It illustrates just how the Hunt & Darton Café has forced change, does shake things up, does cause people to reflect on their conduct and be part of a community, even if only for an hour over Sunday Lunch in a Sandwich (a famous Café dish that is is exactly what it says – a roast dinner sandwich).

If Richard’s films highlight the fun of the place, the final Q&A bangs home the broader issues.

From the outset, the artistic ambition matched the business ambition. The audience experience, whilst playful and original, has purpose – customers are complicit in the art. Aesthetic choices are not frivolous – pineapples don’t just sit well on the head and look good, they have long been a symbol of wealth and trade. The Cafés have given opportunities for artists to make new work and share it with a very different audience. Hunt and Darton have also learned a lot over the life of the project, enhancing their artistic practice, and have been astonished at the generosity and loyalty of customers. What happens next is for another chapter. Hunt & Darton Café will exist, but probably not as a touring construct. The need to create something new is pulling. If today we didn’t quite learn how to go about setting up something similar, our home-going Party Bag with tool-kit and starter ornament will help.

As Andy Field so rightly says, ‘silliness is not the opposite of seriousness.’ Hunt and Darton prove this perfectly with a throwaway final remark – ‘by the way, I’m Hunt, she’s Darton.’

Thanks ladies. We’ll remember that. 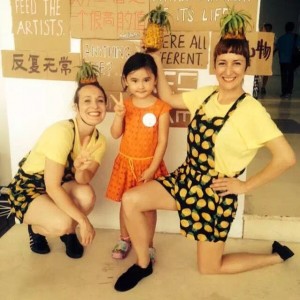 All images courtesy of Hunt & Darton.