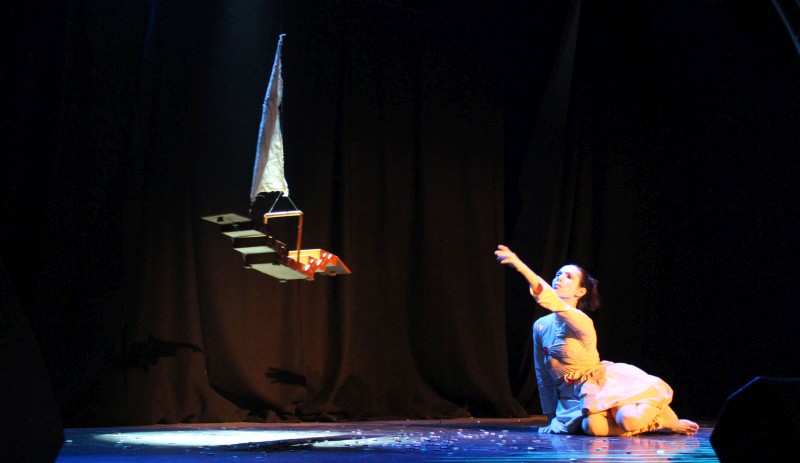 Out of the darkened stage emerges the frozen static image of a classical ballerina. There is just enough light to make her out, enough dark to keep the image obscure – a glimpse of a young woman and the promise of a dance. It’s a tantalising opener and all the more evocative for its hard to see quality, beautiful, it could have held for longer.

There is a triple-decked wooden sewing box suspended by fishing wire to her right, and the lights go up to reveal Inbal Nelly Lewis’s enigmatic face, painted white like a porcelain doll, or a clown, or a waif-like vulnerable little girl. Lewis is all these things and more as she takes us flawlessly through her solo performance Stitch It! She has been working on her unique visual language ‘Butomima’ since 2004, when she graduated from the European Academy for Pantomime and Dance, it combines Pantomime, corporeal mime, and butoh dance and it is a joy to watch.

Our journey of exploration begins with the sewing box and thread, Lewis sticks pins in her breast, spits up tape-measure guts, and sews a red button onto her apron, breathing in life and darkness as she winds imaginary bobbins, and tangles with red cotton thread. We see blood and rivers, gagged words and cutting scars as she plays out to the audience. The imagery is powerful and moving, sometimes straightforward and clear, other times it is more complex and obscure. We are taken on a woman’s journey from childhood to childbirth, ageing, and death. It is a visual poem triggering memories and emotions, thoughts and dreams as it unfolds before our eyes.

Stitch It! does quite literally unfold, by means of the contents of the sewing box and by Lewis’s amazing skirt, an object of seemingly endless transformations; it is a feat of fabric engineering by Yasmin Wollek, exploited to maximum artistic effect by our talented performer. She blurs the definitions of costume, prop, and character, using her body to explore creative challenges and solutions through movement and mime.

Sticking white buttons to her eyelids and a red one to her nose renders Lewis blind, funny and grotesque. She is laughing and then crying, sometimes both simultaneously, funny and horrific at once: it twists up your feelings, the effect is poignant. Baby is growing up.

Buttons are pebbles on the beach and cleverly the sewing box becomes a ship on a stormy sea. A red cord is pulled and the skirt transforms, revealing elastic loops along the hem, coincidently the wind catches the side the of the theatre tent revealing similar loops along its edges. The Warren marquee couldn’t be a more perfect venue for Stitch It!, the flapping canvas, loops, zips and sewn aesthetic complimenting and enhancing the particular minimalist design of the show, under the keen eye of Artistic Director Yael Erlich Morag.

Lewis breaks the fourth wall to enlist an audience member’s help to keep the sewing box boat rocking, this seems a bit incongruous, it happens only once in the show and I wonder if it’s necessary, it temporarily broke the magic for me, bringing me back into my theatre seat with a bump.

It is very powerful and sometimes harrowing to watch a life lived out in Lewis’s performance, we see her joys and sufferings, learnings and yearnings, and then a bent old woman in a cloak, becoming a crone-bird, sea bird, angel perhaps. There is some faffing with the sewing box at the very end which took something from the otherwise virtuoso performance by Inbal Nelly Fichman-Lewis.

Stitch It! was a a compelling watch, Lewis has devised a feast for the eyes, it could benefit from a specially composed musical soundtrack made with the same level of skill and attention to detail. Perhaps someone could fund that? She richly deserves it.