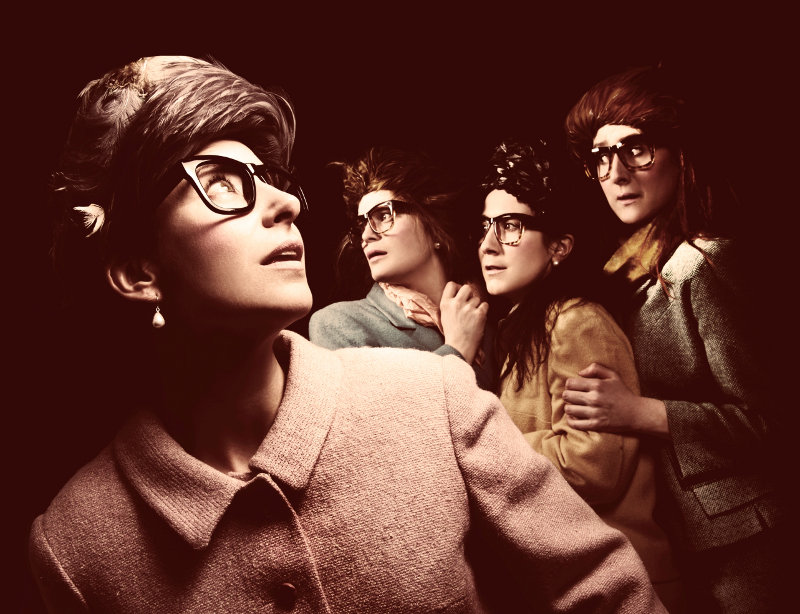 The worlds created by Jammy Voo’s all-female clown troupe are always idiosyncratic, intimate and weird. Their combination of vignette, puppetry, physical theatre and clown proposes unsettling worlds where bodies, objects and voices seem animated by external forces – anxiety, social pressure, and of course us, the audience. In Hitchcock’s The Birds, they’ve found a great vehicle for this unique style: multiplying tension and suspense and the unnerving transformation of the normal into something very strange indeed.

Locked in the closed-down Coronet cinema, four middle-aged women, alongside an enigmatic popcorn seller-cum-musician have taken shelter from the bird attacks outside. Sequences of song, visual theatre that plays with scale, shadow and costume gradually illuminate their experiences amongst the gradually encroaching birds outside, gleefully expanding on identifiable images and themes – from a literal deconstruction of ‘bird’s nest’ hair to some rather odd appearances of eggs. Some of the sections feel more digested than others. A gameshow where the questions explore sinister collective nouns for birds (a murder of crows, anyone?) still feels like a stage in the devising and occasionally the songs (which are brilliantly performed) seem to come from nowhere.

But there are broader undertones rippling beneath the surface of these scenes too. Locked in their cinema prison there’s a comment here about hysteria – this birdhouse could equally be a madhouse which itself holds onto the women’s silly pettiness as they are subdued and seduced by their aggressive, escaping bird puppets. A mishmash of audio news reports draws out the theme of nature rendered unnatural by weird weather phenomena that are all man-made.

Adapting Hitchcock of course sets the style bar high, but the company respond in kind. A colour changing cyclorama sets a defiantly 60s tone and is put to vibrant effect both as a dynamic backdrop and shadow screen. Yngvild Aspeli’s feathered puppets are superbly made, with a distinct flavour of the taxidermist’s studio and brimming with character. Aesthetically exciting, full of strange and unnerving theatrical images, Birdhouse succeeds as both a homage and as a highly original, thought-provoking and enjoyable piece in its own right.