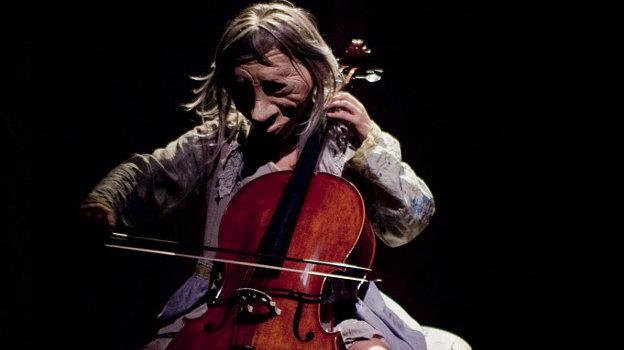 André & Dorine, by Basque company Kulunka Theatre, was a mask theatre performance with an impressive set design – an offering that appeared gleamingly polished among BE Festival’s mixed programme of work-in-progress and finished pieces. The full-face masks were very impressive and endearing, depicting an elderly couple with caricature large heads. An old man sat at his typewriter while an old lady sat with her cello, the piece establishing a routine before a tiff sees them interrupt each other’s work. But the work’s light-heartedness soon tumbles into despair as the elderly woman’s state of decay becomes clear and we realize she is suffering from Alzheimer’s.

The subject was very affectingly handled, bringing tears to the audience’s eyes as the suffering woman did not recognise her son and her elderly husband becomes increasingly desperate in his attempts to take care of her. The tone is leavened by jumps into flashback that are hilarious, and poignant, mini-plays of the couple’s early years of seduction and foolery.

Company founders and performers Garbiñe Insausti and José Dault outline their ambition to develop a ‘language that transcends the word’ and the accomplished physicality, mask work and music created an example of the ‘universal language’ that the festival programming sought to find. This version of the show, as for all BE performances, was only 30 minutes long, but the company have already toured the full-length (one hour) production internationally to great acclaim and it was easy to see how André & Dorinecould win audiences all over.