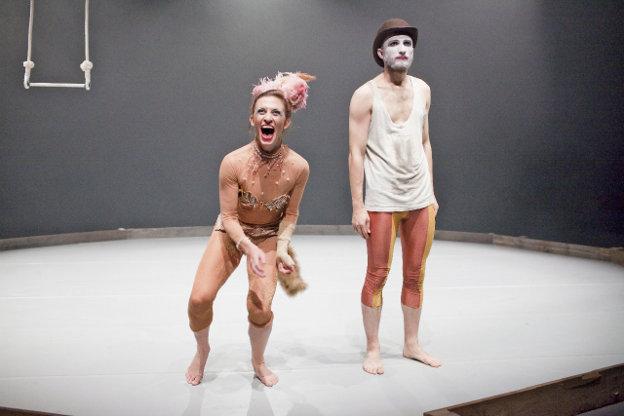 Formed in 2004, Lost Dog was created with the express aim of making work that blends theatre and dance within pieces that are framed by unique, character-driven stories. This triple bill at the Arnolfini presented three of the company’s short works.

The Overhead Project opens with two individuals on stage in what at first appears to be a simplistic and joyful roleplay between a nervous dancer (Rachele Rapisardi) and the architect of her inner monologue, a live artist (Ben Duke) scrawling her thoughts on acetate and projecting them through an OHP. Initially seeming to be predictable and limited, this construction is effortlessly subverted as the narrative between the pair evolves and an excitingly thoughtful deconstruction of the perception of an individual unfolds through ‘their’ story on stage. To explain the catalyst of the eventual narrative reveal would spoil a neat twist in the work, but importantly what we are left with is not two separate entities but a single individual: a dancer prepared. She is an artist, her thoughts and soul laid bare – nerves, anxiety, preparedness and demons exposed. Most importantly though the piece is the exploration of a person’s own struggle with their self – a disembodied self that is presented through what we initially perceived to be a separate entity: projected through another, the performer is her own architect. The Overhead Project is a confident and inventive performance that relies suitably on stillness as much as slick choreographed movement to explore a self removed from the physical confines of a single form.

It Needs Horses continues the theme of the sacrifice that performers may pay as two desperate hacks of vaudeville take us on a grotesque journey: a circus of human savagery. What price must they pay in order to satisfy us? This is a darkly comic tale that repositions the role of the audience in relation to their action. It asks questions of suitability and humour in a painfully adept way. A finely tuned slapstick relationship between a clown (Christopher Evans) and burlesque act (Anna Finkel) who have both seen better days sets cheap laughter popping in the crowd, but this sense of hilarity sharply alters as the pair shift towards base animalistic thrills in an attempt to gratify us. Here the play of sexual dominance between the couple reciprocally fluctuates: it is at times awkward to watch and rightly so; we as audience must pay with our emotions. As some laugh and others watch, one wonders what laughter means at times like this? Are we satisfied and thrilled or repulsed and awkward? It Needs Horses defies an audience to vicariously sit in the darkness in judgment of performance: why should they suffer for our benefit? And as the work evolves we are taken to the extreme edge of darkness – even the thrill of the danger that may have existed evaporates in a desperate and climatic maelstrom of pain: these characters need us and endure for us; they give themselves for us, and look at how it leaves them. This is one of the best short pieces of dance theatre in recent times and excitingly says as much emotionally and physically of the desperate desire behind performance as it asks of its audience’s role.

Somewhat oddly then, the evening opened with a screening of the dance-for-camera work Pave Up Paradise, which, while it suitably established the core theme of sacrifice that can be seen throughout the triple bill and has been a well-received piece in the past, seemed somewhat lacking. It competently exhibited the technique of dance-forms, perhaps more strongly than elsewhere in the evening, but form alone does not always result in depth when creating work that blends theatre and dance. While it was edited together well and ticked many of the right boxes, it failed to ignite, and alongside the other two very striking works it felt dated and unoriginal.