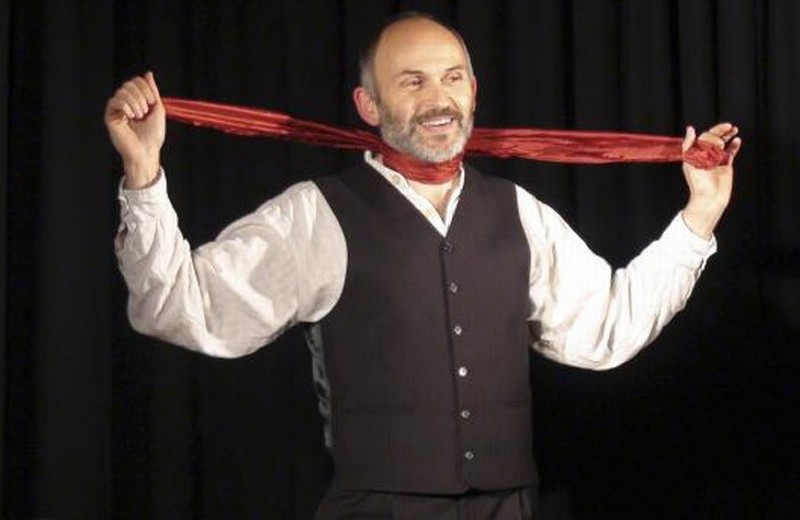 Robert Cohen has ploughed a lonely, yet finely turned, furrow in solo character comedies in the past few years, taking on communist-turned-informer in The Trials of Harvey Matusow or maligned (or was it malignant?) traffic warden in High Vis. This production has another misunderstood antihero at its heart: fratricidal usurper Claudius, whose actions (in)famously trigger the plot of Hamlet.

In Cohen’s smart adaptation we sit on the edge of the action, not unlike Stoppard’s approach in Rosencrantz and Guildenstern are Dead, and much of the comedy derives from his slant reinterpretation of the well-known story. Here, though, the content is character-led, rather than philosophically-driven. Cohen draws Claudius with warmth as well as wit and an ambiguity that makes us wonder if his storytelling will turn accepted interpretation on its heads. Claudius has a childhood here (rather abusive); a running feud with Yorick (darkly hilarious, with the jester cast as a sort of unreconstructed Northern pub stand up); and far more of a history with Gertrude than convention suggests. All the parts are multi-roled with some subtle adjustments and initially Cohen seems more confident in these broader stylings and shifts of voice than in the part of his leading man. But the image of Claudius gradually solidifies, at the same time becoming more equivocal. The show treads the fine line between character comedy and character drama effectively.

This is a thoughtfully made piece of theatre. It is highly structured, its byline ‘100 days of Claudius’ (recalling another oft-criticised leader, Napoleon) broken down into nine bite-sized and tonally shifting scenes, thoughtfully named in the programme to map us through what could otherwise be a rather intense solo in the tightly packed theatre at the Waterfront 2. Clever and funny, its minimalistic staging achieves maximum storytelling effect.