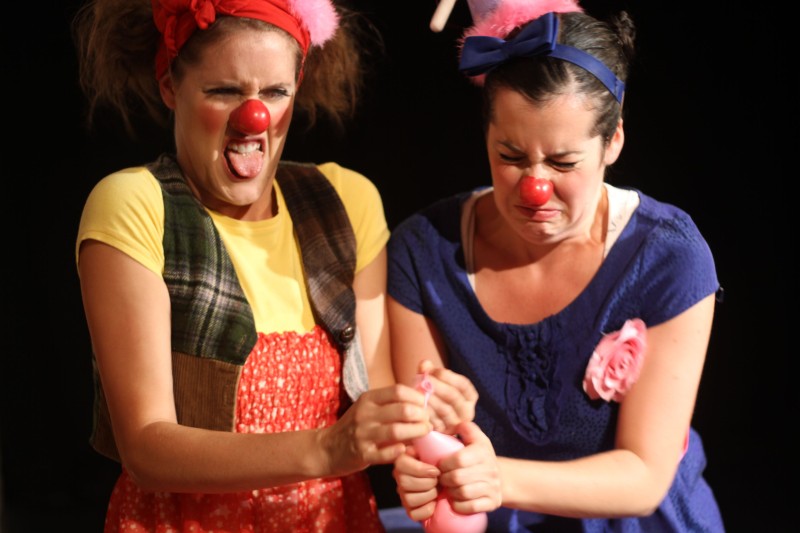 A toilet and a pink floor mat, a silky pillowed poof, a pink phone, and a miniature pink bin adorn the stage. If the title wasn’t enough of a giveaway, the set certainly screams teenage girl. Morro and Jasp are clown sisters whose shows have won then awards on the Canadian comedy circuit. Here in a revival of one of their early shows the big news is that Morro has just got her first period. She whispers it to an audience member whilst asking the men to cover their ears. The uncomfortable writhing ankles and twisting grimace that Morro (Amy Lee) turns out are laughingly accurate of the tomboy teenager she assumes for this role. Jasp is the older, more refined sister, with bow-tied dress and hair in buns (in contrast to Morro’s backcombed bunches). She is awaiting the blessed day to be born into womanhood with the start of her menstruation and when she discovers that her younger sister has started before her, jealousy, envy, and sisterly camaraderie ensue.

These are two endearing performers. They have good stage chemistry and the audience likes them. They portray images of teenage awkwardness and aspirations with amusing accuracy: at one point Morro privately seduces her only remaining cuddly toy and winds up with Jasp catching her humping it. They squeal and screech at each other over who’s going to answer the phone and play out the ‘hot lists’ of their school with a Barbie and Ken doll.

Both wear red noses and somewhat exaggerated and rather clinical clown costumes. This is a very theatrical, choreographed portrayal of clown, unlike contemporary (and ancient) European interpretations that favour instinctive working, thriving on the present potential of each moment and reacting to audiences, working without words often and with unique physicality. Here we have a highly scripted and choreographed show with caricatured portraits of teenage girls. Clown is a powerful and enigmatic form and perhaps here not enigmatic enough.

Although Morro and Jasp are very likeable I find it difficult to be as enamoured with the theme. Maybe a shift of focus away from the girls’ magazines, periods, lipgloss, and boys would attract a little more excitement, there are times where I find this stereotyped portrayal of a girly girl and tomboy verging on uncomfortable. The moments where I see potential to push at meatier topics seem narrowly to miss packing a punch. Pairs of pants smeared with bright red paint are pulled out of the pink bin where they have been hidden, the audience squeal but I long for a darker laugh at what they hint at as being grotesque.

Morro and Jasp are very watchable and I would happily spend much more time in their company, but the show feels out of date. The mystifying intensity of puberty offers rich pickings for play by more vulnerable, reactive clowns, but here it lacks soul.