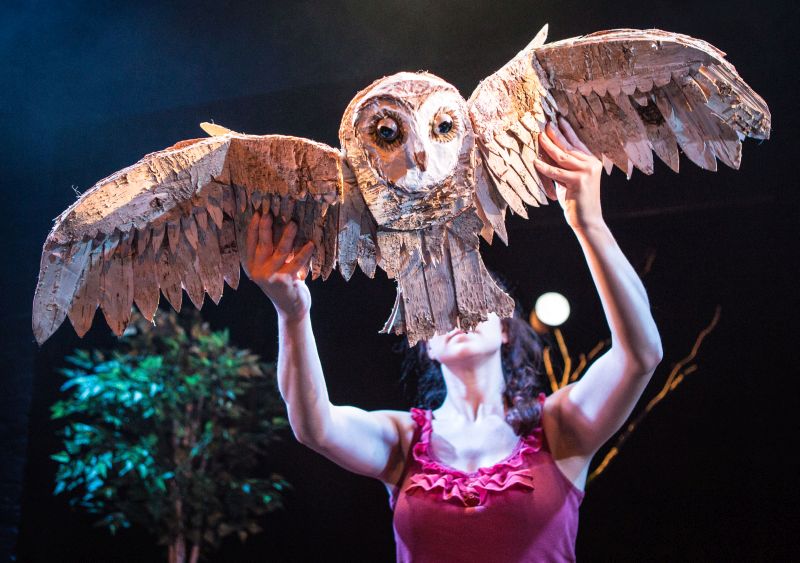 Packed into the Warren’s smallest studio are signs of organic life. A tree’s branches reach up toward the rig and from the floor wild grasses are sprouting. It’s a relief to enter this world as we pile in from the busy playground of the Warren’s ambitious, astroturfed Edinburgh-style courtyard. The carefully crafted set whose materials do seem drawn from nature, the sighs of the wind and birdsong, seem to conjure up breathing space amongst this hubbub. The young audience (the show is for children aged from just three) are immediately entranced.

Meadow is the antithesis of the sort of children’s theatre that rushes towards its audience, singing, juggling, crying out for audience participation. Like a wild animal, it requires your gentle attention, unfolding its treasures shyly and quietly. With a rustle of grasses, the first creatures reveal themselves. They are not here to tell us a story; we are seemingly peeking into their everyday lives. One by one we meet a flock of delicate butterflies who dance in the dusk; a pair of frisky rabbits; a family of foxes exploring their world; a majestic owl who soars across the landscape and other, more mysterious creatures. There are enough touches of the figurative (a pack of giggling haggis-type animals) and silliness (a rabbit who, cartoon-like, nearly slips as he tries to impress, his feet pedalling the air) to sustain the young audience through what is rather abstract storytelling. Or perhaps I’m not giving them enough credit: it’s been newsworthy of late that children are too divorced from their environment, that we are raising a generation of children whose main connection to the natural world is through a screen, but the young audience here seemed to respond to the ‘animals’ instinctively, revelling in working out the actions and motivation of the emerging menagerie.

The puppets all are crafted from the material that makes up their world: dried grasses; broken branches; rusted old bits of farm equipment – which feels like a clear and lovely metaphor for the interweaving of the environment and those animals which make it their home. There’s a backstory, I learn afterwards, of a post-apocalyptic future where the meadow itself remembers and recreates the creatures who lived in it from the materials left behind. This is powerfully poignant but completely opaque in the performance and frankly unnecessary: there is wonder enough in seeing the creatures brought to life and returning to the inanimate – the sense of an elegy for a lost or disappearing world is already there in the show’s form.

The animation is first rate: Old Saw have assembled a stellar cast of puppeteers for this tour whose careful, detailed puppetry is vital in bringing these occasionally abstract creatures to breathing, believable, and compelling life. Their work duets with a haunting score by folk musician Paul Mosley which develops theme and atmosphere for each animal. Soon the tiny theatre is alive with glowing, swooping, leaping, loving, and curious creatures: it is a truly magical experience whose theatricality is managed with a deft touch. The small space isn’t able to actually magic itself bigger, of course, and there are some sequences that are curtailed by the crowded wings and low rig. The show would also benefit from a steeper rake. But touring puppetry has its own very specific demands and this is the nature of Fringe – the show’s overall heart shines through. Take your kids, sit at the front if you can, and enjoy an enchanting puppetry safari.