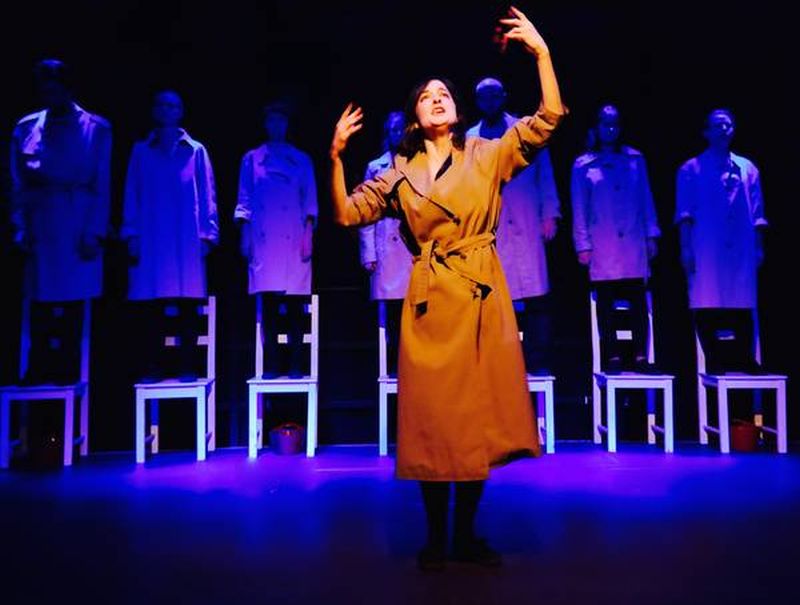 Four women want to reach the sublime and they’ll try anything to get there: happy-clappy songs, fractured didactic arguments, and chair balancing. Theirs is both a philosophical journey, taking in Burke and Nietzsche, and a theatrical one, involving every possible performance style and form in its exhaustive quest for the mountain top. They puncture the action with a meta-refrain of ‘This isn’t working, let’s try something else!’

What looks and feels like a piece grown from a devising workshop, is in fact written and directed by University of Cologne Lecturer Richard Aczel.  He questions, ‘How, in an age that wobbles between apocalyptic pathos and brain-dead boredom, can we still hit the dizzy heights of the sublime?’ but the text and staging lack the necessary focus to engage us fully. ‘We’ve hit the end of irony!’ an actor exclaims, before I’d had chance to register any irony at all.

A dizzying, choppy piece then, with shifts of tone and content that make you question what you are seeing. Perhaps that’s the point, but the Port in Air troupe struggles to communicate such complex ideas through this frenetic mix of movement, text, songs, and games.  The four young women work hard and with commitment; they have a great deal of physical action to get through. A set built from white chairs is constantly rearranged – it’s effective but over played – whilst the lighting design is well above usual Fringe standards. The main singer’s pretty voice weaves songs through the show providing welcome moments of reflection.

Because the actors don’t own the material, the performances are occasionally uneasy and at odds with their on-stage personalities. When the text slips into German, it becomes more fluid and words are allowed to settle. As an ensemble there is a disparity in the quality of performance and some text delivery is tonally uninteresting.  When three hunky men take the stage (audience shills) it only adds to the confusion; their performances seem to spring from another play altogether.  I’m all for ambition on stage and in literature, and the writer and company are certainly going for it full blast, but despite some strong stage pictures, and two engaging performers, there are too few rewards.

As it was, this audience member left the show still at base camp, nowhere near the mountain.