I arrive to see an almost-hidden ship’s figurehead on a pitched roof. Deeply breathing, making a small fidget in order to maintain her striking straddling position on the apex of the roof, Poppy Jackson is peaceful and arresting, a striking image. I can feel the cold stone between her legs, quite satisfying, creating an uneasy tension with the hard work and perseverance needed to endure a four-hour stint spread-eagled upon a pyramid of stone. As I ascend the stairs inside to view her from behind and on her level, my role as disciple, gazing upwards, transforms to voyeur. I watch her as she ends the first session of her piece, which has the wholly appropriate title Site. She is tentatively edging down the narrow, sloping roof tiles. I see her hesitate, and notice her red dimpled bottom imprinted by her weight on the textured stone. I battle between feeling that I have the right to watch her so intimately and wanting to turn away, to protect her from my gaze. 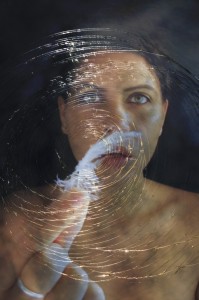 Collected and escorted to Ria Hartley’s Recall, I enter a small blackout studio. Surrounded by heavy curtains, a single chair in front of a TV screen looks as inviting as a dissection table, but Hartley’s instructions work well to quickly establish a safe environment. Using the screen as an additional barrier between audience member and Hartley surprisingly increases the intimacy by allowing participants to see her live without being seen themselves. Putting the audience at this advantage allows Hartley to skip a longer process to establish trust and intimacy with the audience in this one-on-one piece. The exploration of memory, and transformation of object through gift-giving are at play here with a clever use of the theory of recall applied to whatever personal memory the audience brings to the table. Postmodernists see history as ‘just another narrative’ in a way that allows for multiple alternative interpretations of the past, which legitimises the rewriting of a memory in this piece, so that its recall becomes another history itself. I treasure my gift and am armed with a use for it to help stop my memory from repeating: in rewriting the past, hopefully I can change the present also. Only by fully committing to the piece and trusting in the artist can you be moved by its process. A warm and friendly usher offers the use of a prepared, quiet room on exiting, an expectation that the piece often works in emotive ways.

Meanwhile, Poppy Jackson has reclaimed her spot on the roof, taking vigil while viewers gaze up from below. Power and control flitting  between danger and vulnerability revealing risk – an artist who is also activist. The role of women in the male-dominated industries embodied in the buildings that surround and dwarf Toynbee Studios is just one of many debates that Jackson’s work initiates. 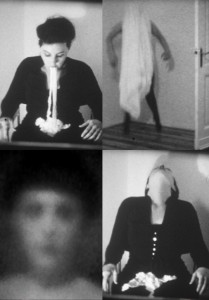 Also exploring the potential of site, Sarah-Jane Norman’s Stone Tape Theory bombards the senses with an abstracted soundscape in a pitch-black environment. With sporadic words and unfinished sentences, participants strain to hear something that they recognise, fighting a dense circle of noise, wandering between speakers. A startling, strobing flashlight provides human markers and gives a sense of the space for a split second, allowing viewers to gradually make their way out. Experiencing Stone Tape Theory entirely alone is disorientating, senses are heightened, and the strobe light becomes exposing and interrogating of its audience. A stream of the artist’s memories are recorded onto cassette tape and played back on twelve channels. Within the loop, one tape is rewound, erased and re-recorded live in the space, degenerating the audio and adding high-pitched frantic sounds to a low rumbling feedback. The complex construction and content of the soundscape is stronger than the output which overshadows it. The spectacle of being frightened in the dark does not fully convey the strategy behind it. The programme notes provided are essential for participants to contemplate the degeneration of memory, how it feels to experience post-traumatic stress disorder and the links between sound, paranormal hypothesis and memory.

Going up to the highest level of the building, I look out of the window to see Jackson transformed again by my new viewing point. Looking down from above, I see grounded flesh emerging from stone like a Rodin sculpture with, far below, a harem of little people entranced by her ascension. As dusk beckons, her defiant body becomes silhouette, her breast a monument against a pink sky, both stoic and sexual. 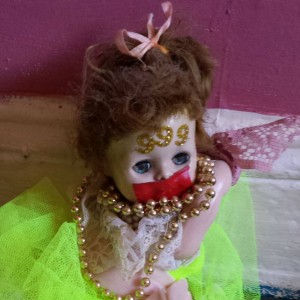 Dorothy’s Shoes: In My Room

Meanwhile, down in the basement, a glowing cavern throbs with the sound of the 70s. In My Room, presented by Aurelius Productions / Dorothy’s Shoes, opens its door for ten minutes at a time for an audience of one, who are invited to relax, read and rummage through piles of fanzines, music papers and books (all genuine 1970s artefacts, belonging to the artist and former drummer Dorothy Max Prior). This cosy and comfortable coming-of-age bedroom allows the senses to recover from the intensity of Recall and Stone Tape Theory. A soundtrack (on vinyl), sampling sounds from glam rock classics to the artist’s own work with bands such as Rema Rema, mixed with spoken-word litanies inspired by Situationist texts, offers a ‘before’ and ‘after’ – from the sexual oppression of the early 70s to the liberation of punk. Delving beyond the gig posters and SEX clothing, taking a moment to read the torn-out pages from books such as Nabokov’s Lolita and personal writings by the artist that are pinned up around the bed, reveals a tension within the aggressively sexual thumbnails and the outrageous facade of punk rock, repackaged into a life-size trinket box. What was once a life full of controversy, sex and new music is now categorised, boxed and labelled – a movement now passed. 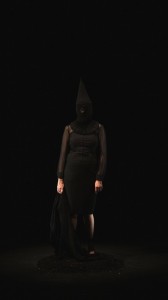 Also exploring ‘before’ and ‘after’: Moving Mountains by Pacitti Company cleverly manipulates technology to show three videos in portrait, a triptych of before, during and after moments of negative experiences around disability. Moments of defensiveness, honesty and vulnerability are highlighted by a series of barriers, non-endings and personal rituals. Caroline Smith performs a choreography of signing, sassy and rhythmic, whilst others stuff playing cards into their mouths or sift through a pile of earth. The audience is directly confronted as the ‘other’, overturning power balances, language barriers and insecurities.