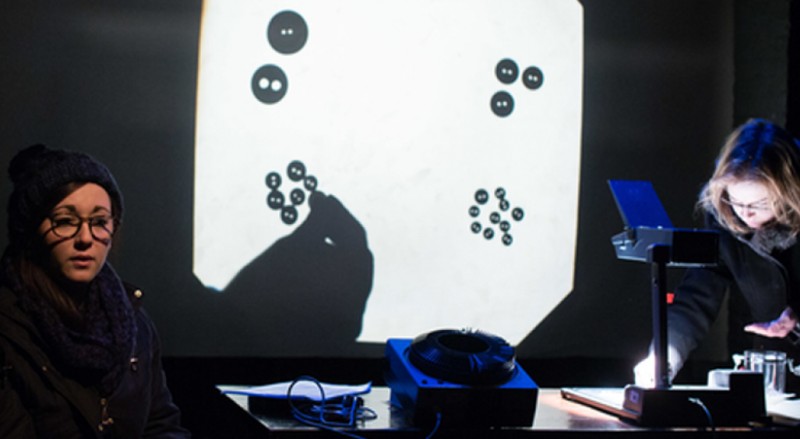 At the heart of Buttons, the first show by emerging puppetry company Sort of Theatre, is a very powerful puppetry metaphor. Buttons, snipped from the clothes of Jewish people as part of the complete stripping of their resources and dignity on arrival at the camps, are used in silhouette as the faces of those reduced to objects at the hands of the Nazis. The buttons, tenderly moved around by Carrack, are unexpectedly evocative – the slightest tilt of their ‘faces’ expressive of uncertainty, sorrow, confusion. These qualities are also conveyed by the sparse text used in the puppetry sequences which baldly describes some of the horrors of their treatment.

This imagery is highly successful and its power undiluted even by the problematic noise spill at The Warren’s Studio 3 venue. Phil Maguire has created a subtle score drawn from the noises from real life and real objects that reinforces the transformation of inert objects into poignant characters. The company are playing with the friction between the real and theatrical throughout: this tension is at the heart of puppetry as a form but it becomes more complicated when applied as an aesthetic to their drama more broadly. Trying to ‘play’ the reality of chatty interactions around the making of the show is a very hard tone to pull off and the exchanges between the two performers (Carrack plus performance partner Dana Segal) as they describe their journey to Auschwitz to research the show, often feel stilted. There’s some very effective and subtly detailed puppetry though and the moments of emotion, when they come, feel genuine.

Carrack’s second show, with even newer company Beardog, is Do You Mind? The format is similar – genuine personal stories, openly told, with some low-tech support from overhead projector and puppetry – although this is a solo piece. Built around a tricky conversation with a new partner – on a second date, no less – the show makes a heartfelt, honest, personal, and relatively uncomplicated plea for mental illness to be seen as an illness that can be treated, and for that to be something we can talk about openly. But the show is, formally and at heart, a love story: cleverly built around all the experiences and choices that lead up to that conversation. It’s very well structured – switching from here-and-now explanations and demonstrations (including puppetry, brain diagrams, and some chemistry on the OHP), to pleasingly non-linear storytelling, to ‘it didn’t happen like that’ counterfactuals.

Ultimately though, it isn’t fully satisfying: the scripted faux-casual text delivery again doesn’t always ring true (and there are jokes that just don’t quite land due to lack of performance crispness); the script sometimes feels a few edits away from really hitting the target as well. A good example is a sequence with a puppet, where the ‘rules’ of puppet operating are shared and interrogated to illuminate human psychological realities. It’s a great idea, but neither the rules or the psychological analogies are clearly explained and demonstrated enough to be effective.

But it’s encouraging to see puppetry used thoughtfully in a show that is really in something close to a live art form; most interesting because this is not, I think, its natural or straightforward home, and there is much promise and ambition in both these pieces.