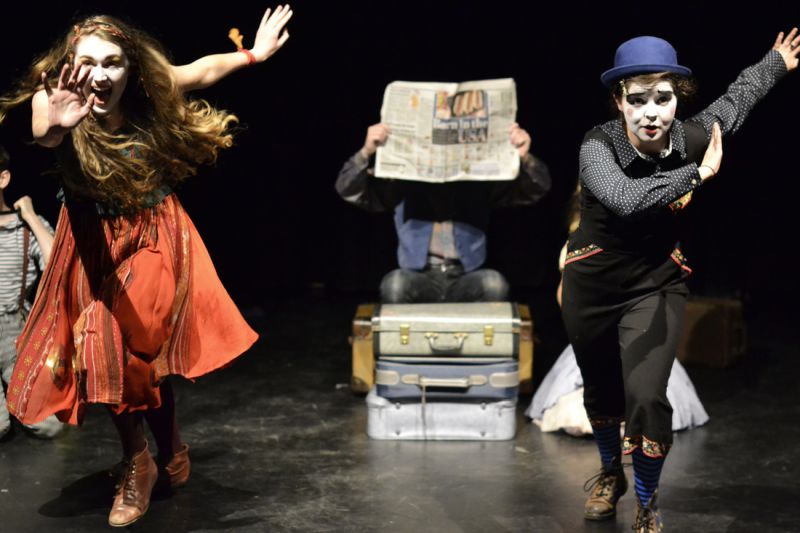 Five actors in clownish makeup perform energetically in a highly theatrical mixture of exaggerated gestures and over-enunciation. They establish a premise that the troupe is travelling to Brighton to perform their (this) show. They stop off on the way to rehearse to an imaginary audience.

This second production from young collaborative company Human Zoo offers a series of cautionary tales, about individuals whose obsessions led to their tragic demise. It is highly reminiscent of Shockheaded Peter in style, yet with some of the story content brought up to date. There is a girl whose interest in the stars leads her on a quest for celebrity which ends with a psychedelic trip (I think). A man whose lust for internet information makes his head swell up into a balloon which carries him away, and the character of the title whose love for the moon… makes her seemingly disappear in a meteorite shower.

Clearly much time and attention has gone into making the show, which is also full of songs and smartly choreographed movement routines.  There are moments of slapstick and puppetry alongside passages of quite dense poetic prose that suggest an ambition for philosophical profundity, which made me wonder what age range the piece is aimed at (it’s promoted ‘for all ages’).

Admittedly, I do suffer from an inverted snobbery, but the posh, squeaky accents and effervescent energy of adults seemingly playing children playing adults, felt mannered to me. However, the company are talented and industrious with a clear and well-realised vision of the style of work they want to make.  Since they are dressed as clowns, more direct audience engagement might make us care more for the characters and invest in their stories.  Near the end of the show one performer suggests that the tales are based on the fears and phobias of each performer, which added an extra layer of interest for me, and this intriguing idea would benefit from further elaboration.