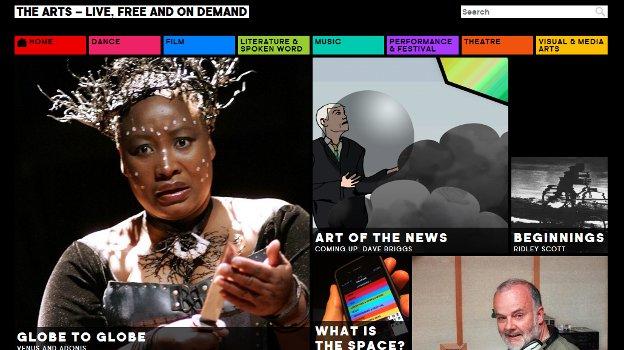 Today sees the (soft) launch of The Space, a collaboration between ACE and the BBC to create a pop-up online platform for digital cultural experiences. The site runs from 1 May until the end of October, and over that time will present work from 53 commissioned projects spanning Dance, Film, Literature and Spoken Word, Music, Performance & Festival, Theatre, and Visual & Media Arts.

Most of the projects aren’t running the entire six months, so at present the website only has a few offerings for each section. Worth a look though is the Dance category – to fill it out, they’ve surfaced some old dance for camera films that were made during the 90s and early 2000s as part of a project (again between ACE and the BBC) to pair directors with contemporary dance choreographers. Total Theatre would particularly recommend Tom Cairns and Aletta Collins’ Alistair Fish, which has this surreal hazy 90s vibe and is actually sort of about a man who’s trapped in an illusory dance for camera world (where he learns to love again; it’s got a definite and very charming Singing Detectivefeel).

Over the coming months we can expect projects from, among many others,Fuel (a film of Sound&Fury’s Kursk which ‘experiments with filming from the audience’s perspective in order to more closely mimic the immersive experience of watching it live’), Crying Out Loud (a documentary mini-series about contemporary circus), Sadler’s Wells (they’re actually doing two – basically broadcasts of Wah! Wah! Girls and Breakin’ Convention), Bristol Old Vic (something really vague sounding: ‘a unique and interactive way of replicating the emotional experience of watching live performance using the pioneering techniques developed by the BBC Natural History Unit’), Forkbeard Fantasy (an online game that takes inspiration from the company’s live and film work), Blast Theory (a new piece, I’d Hide You, that will ‘connect virtual worlds, video streaming and performers on the streets of Manchester’).