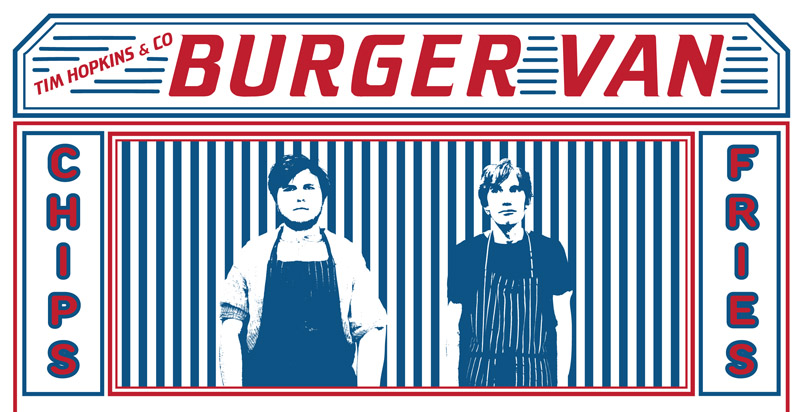 In the decidedly inauspicious surroundings of the Thistle Hotel lobby, outside the gents and inside a large shopping centre, we wait to be invited into a carpeted conference room. Inside, a burger franchise banner has been overlaid on the Freestival flash atop a loosely hung backdrop of a black curtain. At a table on the floor, two uncomfortable looking young men are hovering listlessly. This table is their burger van. This is not a set of circumstances that inspire confidence in the theatrical experience but what follows is an hour of joyous performance whose life, like our own (however much we might want to escape into the Fringe’s glamour), feels completely at home among these depressing corporate trappings.

Contrary to its context, this is a highly theatrical production offered open-handedly on a shoestring. Two battered chopping boards, a hand-drawn cardboard radio, a couple of aprons, and assorted headgear form the understated props. The artists work in partnership with Sh!t Theatre, last year’s recipients of the Total Theatre Emerging Artist Award, who provide musical accompaniment, sound effects, and puppetry, metatheatrically animating the edges of the performance world so that the two boys can marinade in the misery of their reality. It’s an entirely satisfying format that establishes a strong theatrical style and arch inclusivity with the audience as well as space to delve into the bleakness and quiet desperation of the boys’ deadened life in the van, in a car park, and later, on tour. I was reminded of early Kevin Smith films or even The Office rejuvenated for a new generation: overqualified, underemployed, and trapped.

This is a really enjoyable production whose careful crafting belies its casual tone. A witty, smart dramaturgy of jump cuts, inappropriate underscores and menacing, cartoonish burger puppets give us everything we need to open up a real connection and sympathy to the characters and their world, and there’s oodles of silliness with both men giving sharply detailed comic performances whose bleak bite we can taste. Brilliantly unexpected and building to a wild and surreal finale that takes us with it every strange step of the way, this is a wonderful example of how theatrical skill, commitment, and a bit of style can make magic in the most unlikely of places. And like the real Fringe ought to be, it’s free!