Now in its 7th year Voila Europe! is an annual theatre festival focusing on cross-border European work, which showcases work featuring a variety of different practices. Originally established with a focus on French-English bilingual performance, last year (2017) the festival expanded its availability to artists from all European countries, as a response to Brexit. It describes itself as ‘a border-busting mix of multicultural, multilingual, and multidisciplinary performance’.

I managed to catch a meagre three out of the 36 shows on offer this year: The Lonely Room, Republica and Sylvia. All three shows, as you’d imagine they would, reflected on European identity – in very different ways. Considering the year we’re in, and what is due to happen in March 2019, the festival carries a different kind of importance with it this year. 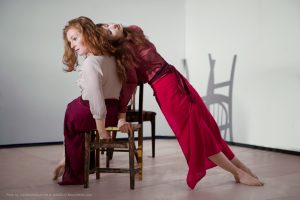 The first show I saw at Voila!  was The Lonely Room by Hoax, presented at The Cockpit Theatre.

Once you’re in The Cockpit’s main space, you see, downstage right – orange lit with orange hair (well, ginger, anyway) – two women, their contorted bodies wrapped around each other, as if caught in the act of something they don’t want us to know about. The geometry of their bodies bears some resemblance to the geometry of the totem-like structure behind them, upstage left, comprised of wooden chairs (also orange) stacked up on one another. Corners and edges jut out from both and the apparent hap-hazard manner in which they have been assembled makes both masses of wood and bones indefinite in their shape, as if there are many positions fighting to be visually dominant.

Immediately we see struggle, a struggle which, as Hoax claims, is at the heart of the performance’s identity. ‘This story is inspired by the power struggle between the different sides of our minds, the dreamer and the tactician, and the personality clash that happens when the two meet,’ says the show’s freesheet. And yes, the two women do frolic onstage as they play tricks on each other, fight for one another’s attention, and compete in hoarding the most chairs. This power struggle exists not only between the dancers, but between the two different theatrical languages, that of dance, and that of theatre.

In a conversation, when both parties are prioritising using their words for gaining power, the possible meanings and conclusions from the conversation remain undiscovered; as they pull chairs from beneath one another, and their double-takes morph into Bausch-esque repetitions, we’re presented with entertaining physical displays, but the dialogue doesn’t go anywhere. The dance and the theatre of The Lonely Room don’t allow either aspect to develop. Instead, they attempt to steal the same moment from each other, and the overall momentum of the piece never takes off.

The Lonely Room is interesting, as it uses the incompatibility between its two genres as an explorative platform. However, they are unfortunately too incompatible for the piece to explore their dichotomy without undermining the essential aspects that are needed for a performance to provide a good audience experience.

The second show I saw during my brief time at the festival was Republica by Juan Carlos Otero, Keir Cooper, and Lola Rueda, in collaboration with Emma Frankland.

‘HEY. PEOPLE. THE FIESTA IS OVER’ sings Juan Carlos Otero, with Keir Cooper and Lola Rueda at his side, all semi-nude and covered in orange paint, dancing like the Eurovision band we all deserve but will probably never get. The three performers are embodiments of aspects of 20th century Spain: Otero is the proud and partying 2nd Republic, Cooper is George Orwell (Union Flag boxer shorts on display), and Rueda is a passionate Mother Spain. It serves as a somewhat ironic commemoration of the Spanish Civil War, and a cheer for Spain and Europe, as the performers dance in union.

Dancing is very important in Republica. There’s lots of it – mostly flamenco and burlesque – and Otero and Rueda’s execution of it passionately demonstrates Spain’s political transformation. The brief pre-Franco freedom brought to the people by the 2nd Republic is embodied by the opening Catholic priest striptease routine. As the clerical clothing is lifted, red and orange sequins shaped as flames are revealed on the underside of the garment and from underneath its metaphorical ashes, Otero emerges in leather and fishnets, fireworks erupting behind him in a display of queer liberation. All of this is accompanied by a mixture of live and recorded music sang by Otero with Cooper on guitar and keyboard. This moves into an impassioned flamenco section danced by Mother Spain (Lola Rueda in a fiery red dress).

The party atmosphere of the performance quickly fades when we reach Franco’s regime. Rueda, as Mother Spain (her frilled skirt now slimmed down to a streamlined mini-skirt) and Cooper, (morphed from George Orwell into a clever personification of Britain, flagging up its lack of intervention during and in the run up to the Spanish Civil War) join Otero on stage and engage in minimal dialogue, as the house lights are thrown on, and the starkly-lit performers sit in the aftermath of an unspoken disaster. Above them, text is displayed onto the back wall to mark the chapters of the performance. Most pressing is ‘The Spanish Pact of Silence’ reciprocated in the performer’s lack of verbal conversation.

Republica’s focus on the Pact of Silence is a healthy yet grimly important reminder of the importance of conversation during times of change, and the entire piece is useful as a historical comparison to contemporary debates around the UK’s departure from the European Union. 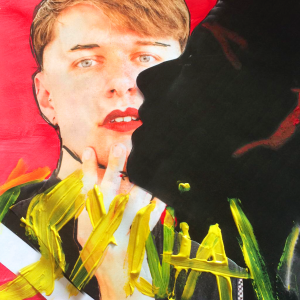 History is something that was also utilised by Ja?TheatreCompany’s Sylvia, the final piece I saw at Voila!

In Sylvia, we get a snapshot of the life of the subject of 1920s German artist Otto Dix’s painting, ‘Portrait of the Journalist Sylvia von Harden’. The piece centres round the creation of the painting. Portrayed by Joseph Morgan Schofield, Sylvia rarely leaves her chair as she sits, drinks champagne, smokes, and performs a monologue comprised of extracts from her memoirs merged with original writing. She spends the entire time in front of a portrait backdrop, which also acts as a surface for video to be projected onto.

It’s rare for a drag performance to be engaging without the use of high-energy theatricality, but Sylvia succeeds first and foremost on this level. The cigarette smoke-filled, slumberous atmosphere of the piece gives it a sense of eternity, the same eternity that we could suspect portraits would experience if they were sentient (a la Hogwarts), and the piece’s musical numbers are suitably slow and sultry. Intermittently throughout the performance, on the backdrop behind Schofield, videos of actress Caroline Tyka appear. Also portraying Sylvia, Tyka speaks in German and provides the female, non-drag version of the German journalist.

In Sylvia, the reverence of female idols commonplace in drag is mixed with multimedia to add new meaning that comes from beneath the performative veneer of Schofield’s drag. Through this, it gently investigates ideas circulating in current conversations surrounding gender identity, in regards to truth and authenticity vs the subjectivity of the onlooker. Although this method is unique in some ways, the piece doesn’t quite manage to provide original input into the conversation it is part of. This may be to do with the fact that the text is centred round Sylvia, and works more as an interesting biography of the woman than as something that can be used to measure where we are now as society.

As well as orienting around European identity, these three performances all seemed to be concerned with providing commentary on juxtaposing ideas. In The Lonely Room, this was the struggle between its genres; in Republica, it was Spain’s political clashes; and in Sylvia it was two different authentic versions of the protagonist. These juxtapositions seem indicative of a state of confusion as, in the UK, our relationship with Europe is at an apex before a change with significantly unpredictable outcomes.

It all seemed a bit bittersweet at Voila! What would have been a warming union of friends in previous years is now, in 2018, a festival that, due to the current climate of unease and concern about Brexit, feels inescapably political. Where shows used to act as friendly gestures of camaraderie and conversation, they now bear the weight of farewells and drastic warnings.

Theatre Deli in the City of London hosted the Voila! Crossroads, a festival hub for artist networking, pop-up performances, and the festival’s European Theatre Forum.