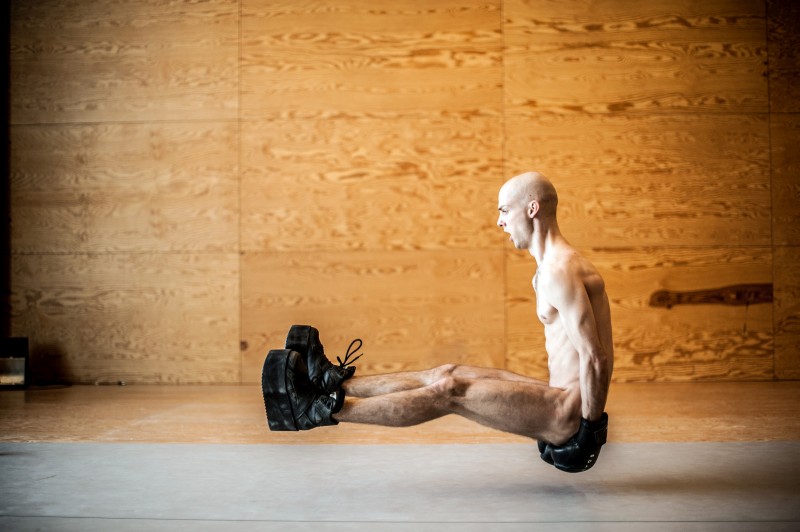 This calming and charming performance, subtitled A Tragic Autobiography of the Body, showcases Vantournhout, stripped of all clothing, as he progresses through a series of mini-acts adorning himself with objects, skills, and human expression. The collaboration between performer Alexander Vantournhout and dramaturge Bauke Lievens sets out to redefine contemporary circus by exploring the role of the performer in relation to form, narrative, and objects.

Vantournhout’s opening charms the audience with a sly grin and a split second striptease, transforming from a fully clothed professional into a fully naked clown so quickly that it is almost missable, using harlequin flooring as a shield for the trick. A slightly delayed realisation of what is playfully presented in front of us sets a tone for laughter and giggles that persists throughout the performance. The shedding of clothes sheds too our sense of the body’s function, moving instead towards pure form. The slow and subtle body isolations which follow are clear and unusual, abstracting the body but never fully shedding the sense of humanness and humour protected by Vantournhout’s nudity and twinkly eyes.

The movement vocabulary of the performance explores the precise workings and proportions of Vantournhout’s body. He distorts and isolates limbs and body parts to play on the assumptions he has outlined that his neck is too long and his legs too short. Training the extension of his neck to make grotesque shapes extends his own body’s limits, highlighting the absurdity of those assumptions whilst commenting on the adaptability of the body to achieve technical and physical goals. He extends his ‘short legs’ with the addition of a pair of platform boots.  His physical phrases deliberately alter, or edit, his body’s autobiography. Using a series of repeated phrases to deconstructed Arvo Pӓrt compositions on a keyboard, a pair of platform shoes, boxing gloves, and finally an Elizabethan ruffled collar are donned one at a time on each repetition. The vocabulary expands into undulating, turning, and cart-wheeling with no clear up or down, beginning or end. Vantournhout’s relationship with the objects alternates between being aided and inhibited by them, as they are incorporated into a developed and altered version of the previous vocabulary.

Tumbling through shoulder stands, handstands, turns and rolls, he exerts himself into momentum only to abandon the commitment to the pose; he breaks the perfection and mastery of the body, quite literally falling out of his choreography. As heavy-booted landings produce loud thuds, the elegance of suspension is juxtaposed with the fall as Vantournout’s energy is altered. Then, in contradiction to this, the movement becomes more acrobatic, his large falls and somersaults now cushioned, last minute, by the boxing gloves. The choreography is now only made possible by the props that have hindered it. The irony displayed through the humour of the work creates an evolving rather than failing body, whose dynamic relationship between skill and object empowers the performer through the celebration of the fail rather than in traditional mastery of a prop.

Yet it’s silly too and the audience gasp and giggle at risky landings and stretching tongues and foreskins. The tragic act’s ‘non-ending’ leaves this clown twirling and playing with his fake tongue. With no formal ending, the audience are instructed to stay as long as they wish and the piece descends into the antidote of a final show-stopping spectacle, an anti-climax true to the tragic circus performer but funny and charming throughout.