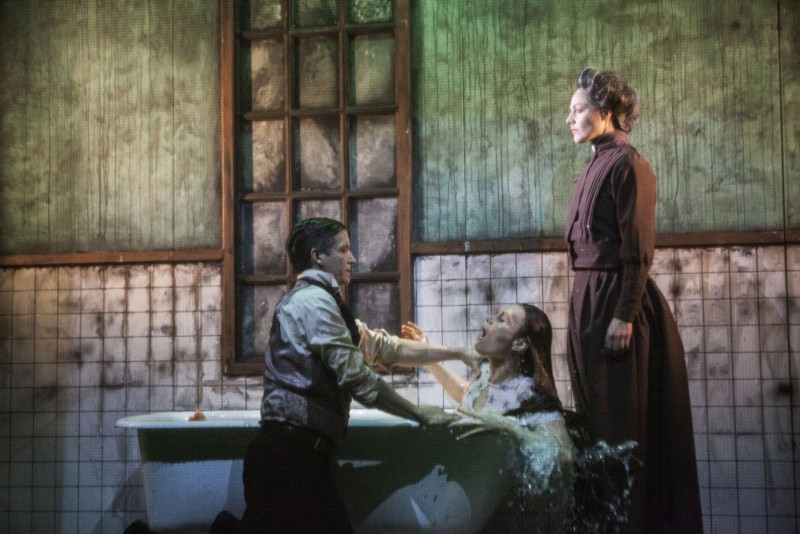 Horror is postmodern montage of silly, supernatural, creepy, and outrageously gory tricks that has a packed auditorium squirming, laughing, and jumping as the climactic scenes keep coming one after the other. Three friends come across an abandoned house and enter Little Red Riding Hood style in red capes; we are immediately aware of their vulnerability and, true -to-expectation, a sequence of catastrophes propels the characters through events that both dislocate and relocate, time, space and person within ghostly narratives and brutal situations.

Ahlbom throws his performers right into scenes projected live onto a large gauze screen, so they are both within the action and outside it, discovering themselves acting within a horror. He breaks and reaffirms the fourth wall continually, using an array of magical visual effects. What appears to be a live stream is merged seamlessly with recordings that reveal ghostly additions to an otherwise empty stage. Changing camera angles and a figure literally diving out of the television screen confuse our sense of reality and the performers’, playing thoughtfully the idea of just who is watching who with a brutal awareness that maintains the sense of doubt and illusion.

It’s all highly theatrical, whilst borrowing heavily, inevitably, from film and TV. Personified monsters, frolicking lovers, and fights for dear life are crafted through a choreography of lifts and falls, using all the technicalities of contemporary dance alongside the qualities of a doomed character facing the axe in the middle of a horror show.  Zombies and levitating characters are made stronger by choreographic phrases which set the scene for and enforce the spectacle made by special effects. A man possessed by his evil hand wriggles, wallops, and catapults across the stage at the mercy of his appendage which scuttles about the stage after being eventually chopped off in a fountain of blood.  Countless references to the genre like this pay homage to films such as The Hand, The Shining and The Exorcist, and an eager and committed audience delight in their personal discoveries of these in the post-show discussion. The rocky music score that transforms fighting dance scenes into punchy comic strip phrases develops these references, whilst making audiences jump out of their skins as piercing sounds accompany flashes of light and ghostly appearances.

Cinematic effects, gore, and disappearances defy your expectations in a series of spectacular triumphs that seem to magically overcome theatre’s practical limitations and Ahlhom carefully navigates post-show questions so as not to reveal the mechanics behind his work. Seemingly instant transportation from the house to a forest installed behind another gauze screen, an arm reaching down the throat of a character, levitating and disappearing characters; all remain clothed in mystery.