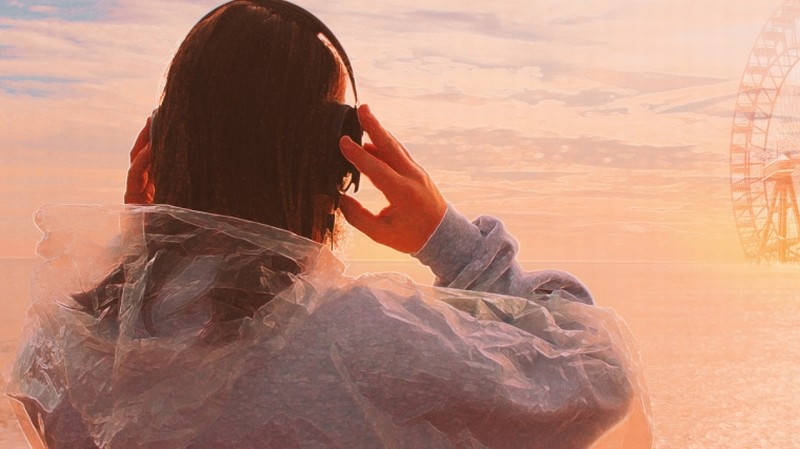 2016 seems to be the year when binaural technology really starts to find creative traction in theatre making. The Last Resort is the third show this month I’ve experienced that plays with the possibilities offered by its spatial reconstitution of soundscape, so that sound appears to materialise in specific physical relationship to your head: shooting past like invisible cars, whispering just over your shoulder. It creates an experience that is more bodily (as explored in Reassembled, Slightly Askew) and absorbing than regular stereo. Perhaps that is one of the reasons it feels more difficult to fully appreciate in The Last Resort, where we are also being asked to negotiate a strong site, various objects and two rather dense narrative fictions.

We are brought to an unloved, flyblown corner of Portslade beach, round the back of the port. It’s a place charged with bleakness and artists Rachel Champion and Tristram Shorr excel in its sensitive excavation: it really feels as if the creepy, industrial flavour of the story they unfold is generated from the site. The story, like the soundscape, is multilayered: there’s a frame set in the future about tourist trips back here to an abandoned earth; there’s the sci-fi biography of the theme park site they have concocted; and there’s another story flickering underneath, breaking through the subtext and the static, about what’s really been going on.

It’s richly worked and deeply thought about yet doesn’t entirely coalesce as it should. The simple physical instructions we’re given to work through in our exploration of the site on foot recall Shorr’s work on Charlotte Spencer’s Walking Project in 2014 where they hinged more effectively between real place and recorded sound because the body and our consciousness within it was central to the piece’s subject. Here, the tasks can feel a little thin – too specific for their fictional justification on our virtual tour yet complicated enough, as we fumble with the oddly anachronistic technology of laminated cards, to distract from the sophisticated sound design. The futuristic concept and necessarily somewhat obscured nature of the rides described on the tour also make for an abstract technological soundscape whose binaurual powers are harder to appreciate. When, in The Encounter, we hear a jaguar growling behind us, the effectiveness of the technology is empowered by our recognition of the sound, of the thrilling impossibility of its presence where it appears to be. Too often in The Last Resort, the fantastically worked score is used to recreate an almost impossible-to-imagine feat of future science and technology, and so its power to bring story to imaginative life through sound loses impact. It’s a relief when we hit moments of musical lyricism or clear and simple ‘sound effect’.

There are lots of thoughtful and clever moments in The Last Resort which add piquancy to this macabre bit of science fiction and the work is hugely detailed in its imagination and sensitive in its discovery of site. The form – of both the audience experience and the thriller-style narrative which drive it – want some development, but for all its growing visibility, this is a technology whose theatrical uses are only just starting to be understood.