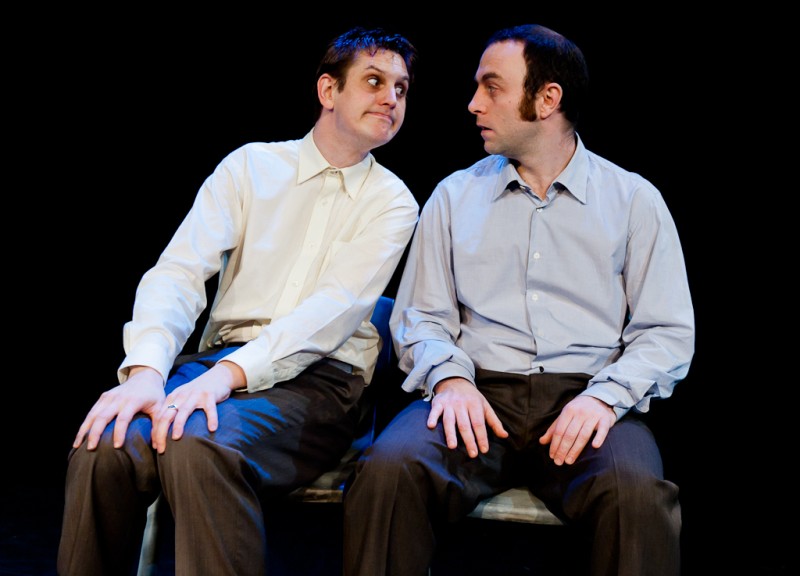 In 2006 Big Wow, Liverpool based physical comedy duo Matt Rutter and Tim Lynskey with writer Robert Farquar, burst onto the fringe scene in Edinburgh with their sell out, Total Theatre award nominated show Insomnobabble. Their work combines anarchic and slickly-written comedy with phenomenally skilful and detailed multi-roling that enables the cast of two to conjure a world of comic characters on a stage devoid of costume, props or set. Eight years on, with their fourth show, though their first time back to the Fringe, their unusual formula strikes another hit.

In many ways, The Art of Falling Apart mines similar territory to Insomnobabble. Matt Rutter reprises his role as a suffering protagonist, here straining against inertia and a loss of purpose: he may be sleeping fine but at 35 in a dead end job and a relationship in a rut, he feels like a failure and longs to escape. Around this emotional eye of the storm, Lynskey creates a whirlwind of characters messing with his head, complicating his life, and generally creating mayhem. Farquar’s sharp script doesn’t waste a single word, bristling with killer one liners and satire that ranges its targets across self help, art, and pop culture. Stock comedy characters abound: the overpoweringly smug yuppie colleague, the Butch cockney hedonist, an Irish innocent who perhaps owes a little too much to Ardal O’Hanlon’s Father Dougal.

But these familiar figures are transformed by the physical and vocal skill and sheer relentless, overwhelming energy and commitment that the two performers bring to bear. There’s a satisfying feeling of limits bring pushed in many scenes, from a weird, wild party populated by a diverse cast of five increasingly inebriated characters; to the physical challenges of frantic rave or running scenes. The character transformations are fast, flawless and completely exhilarating.

Big Wow have been developing The Art of Falling Apart since 2012 (they are based at the Unity in Liverpool) and it shows. Yet it’s not just a slick and brilliantly entertaining hour and twenty minutes of some of the finest physical and character comedy you’re likely to find on the Fringe. The writer and performers never lose sight of the emotional heart of the figures they are portraying and this story of existential crisis and unlikely friendship is, ultimately, unexpectedly moving. Thoroughly uplifting stuff.