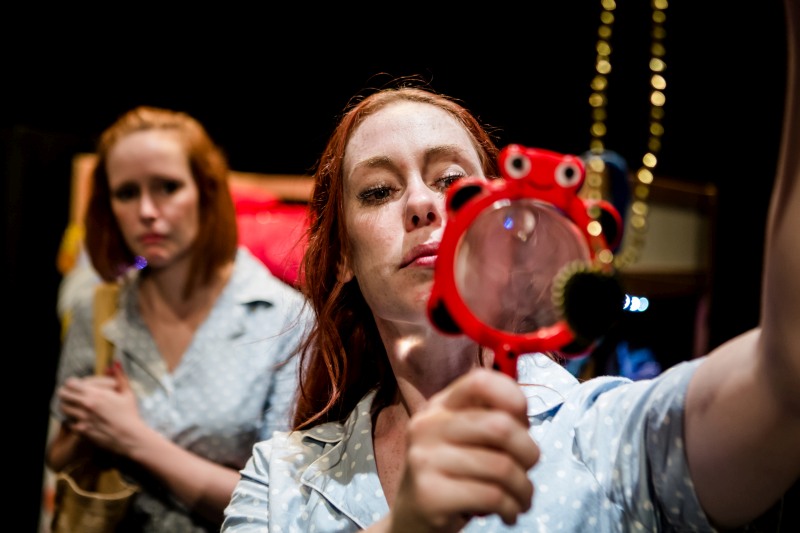 Leeds-based verbatim company The Paper Birds return to the fringe with their fifth show, an examination of the conditions for and experiences of being ‘Broke’. They describe the production as developing, aptly enough, in straitened circumstances, encouraging their return to a model of making work focussed on the company’s core members: director Jemma MacDonnell, performer Kylie Walsh and composer Shane Durrant.

The scene is set on a suitably cramped stage, bunk beds, screens, and boxes are crammed into the Pleasance’s petite Jack Dome. The opening is compelling: at either side of the stage inside two gauzed booths, two women, who are strikingly similar and dressed almost identically, scroll and rewind through a series of interview snippets about experiences of debt. It’s fast and precise, the lighting and effect of the overlaid projection makes me question if what I am watching is live or on film. They seem like the same woman, but then represent a range of voices in performances that are tight and expressive, both vocally and physically. I believe in each character as he or she appears.

From here the show opens out into more familiar devising fare. We are in a child’s bedroom and a story is being told, a story about treats, about money and sweets. The company collage an assortment of interviews and information around this frame, at the same time using language that’s metatheatrical – they portray their own interview processes and their own experiences of money management and running the show. All are underscored live by Durrant, folded into the bottom bunk, and scenes are propped with children’s toys. From time to time we revert to the experience of the story’s teller, a young mother trapped in the frightening grip of debt.

The problem is that the economics of debt, the definitions and causes of poverty are vast and intractable subjects and the company find it necessary to simplify in order to shape and create connections across their material. One way they have achieved this is by giving considerable play to their own experiences around money, but this unsettles the rhythm of the storytelling, and gimmicks like a gameshow scene, though related to the theme, further muddy our relationship to the protagonist where the emotional heart lies. It’s never entirely clear why this character is doubled and it feels like there’s still a stage of editing and refining to go on for the show to fully articulate itself. The company do discover some powerful motifs, such as the recurring horror of a ringing telephone interrupting scenes, and some strong images, such as when the harassed debtor tosses and turns as numbers scroll across her mind and body.

Yet their desire to create a complex weave of character, information and metatheatricality makes this complex subject too slippery to get a grip on. In an age of austerity we are all saturated with media information and stories about debt and I entered Broke hoping for a new perspective. An intriguing thread does emerge across interviews about the ways your attitude toward money is shaped as a child (reflected in the design dramaturgy), but when the defining question about how you might talk to your own child about managing money in the future is asked, the company can only leave it hanging.