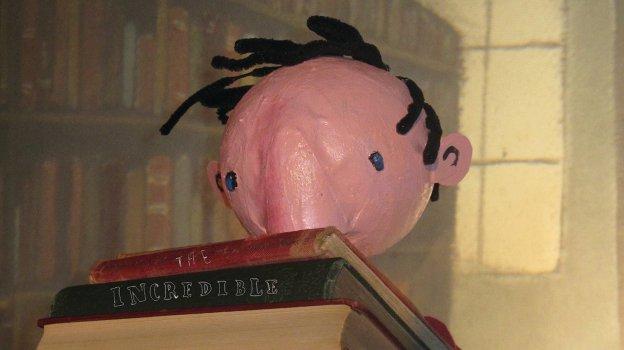 This five-minute wonder of a production takes place in a black box, a little tent or Tardis for a very small audience. Young children (the target age group is four upwards) may be accompanied by an adult, but otherwise the performance is tailored to a single viewer.

Three windows alternate in peep-show scenes, with shutters opening and closing to reveal puppets, performers and projections. The format is perfect for playing with perspective and size. There’s also a cuddly alienation effect, as you are invited afterwards to see the ‘outside’ show, looking behind or more strictly in front of the scenes.

The story by Oliver Jeffers is relatively simple, about a boy who devours books then realises you have to learn to read properly. Instead, the charm is in the telling, and the ingenious if slightly old-fashioned way this is brought to life by Bootworks.

Adults may rediscover something of their childhood. It took me back to thePlay School windows, the zippy animation of a Tom and Jerry cartoon and the scientist with round glasses, Professor Heinz Wolff, of The Great Egg Race.

The production could be a bit rough round the edges. I was told you didn’t need to move around to watch, but in fact this may have been euphemistic, as moving meant you could look awkwardly into the wings.

More importantly, the barbershop soundtrack became slightly relentless, as did the pace. The frantic cartoon format meant that the quieter moments of the story lost impact, there was less light and shade. Children’s attention spans can be short, but equally moments of absorption and revelation are what stories are about.

The Incredible Book Eating Boy has received public funding, and could be an eye-opener for audiences new to theatre. Even in the safer environment of The Pleasance, it’s a stylish, co-ordinated achievement, an ensemble piece.