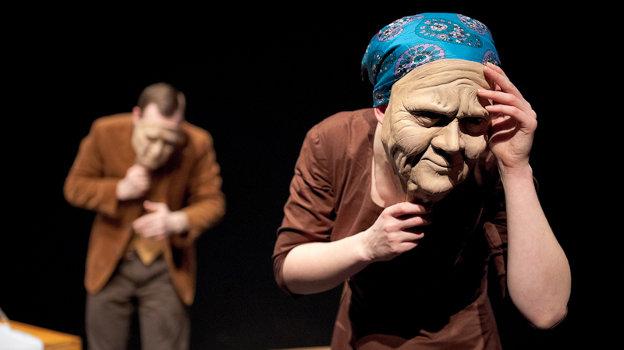 An old man, recently bereaved, sits and sits, the minutes ticking by with painful slowness. He makes tea, and out of habit pours two cups, one for him and one for his dead wife. And still he sits. Watching him in anguish is the spirit of his wife, desperate to help, to tell him that it is OK to let her go. She tries to move ‘her’ cup away; she flutters round him in the house they have shared together for so many years. He makes a desolate attempt to sort through her belongings. A small case contains all her most treasured possessions – her favourite necklace, a bundle of letters – and these he lingers over sorrowfully. Each object becomes a conduit for a milestone memory from their shared life: their courtship and marriage; a baby that doesn’t survive infancy; the relived trauma of wartime injury after he is demobilised; the difficult patch in their marriage when she is given the opportunity to study or to forge her own career path. And eventually the inevitable as one partner (she) dies after a long illness and the other (he) is left to grieve.

It is a simple, universal story. Interview anyone over the age of seventy, speak to your parents (or grandparents, depending on your age!), and some version of the story above will emerge. That, for me, is a positive not a negative. At the heart of the success of this piece is the universality of the story, and the beauty with which it is executed.

There is not a second of Translunar Paradise that hasn’t been plotted with infinite care, nor performed with immaculate craft and precision. George Mann as the widower and Deborah Pugh as the spirit wife are a perfect match, their wordless storytelling exhibiting the expertise in mime and physical performance that a Lecoq training gives you, yet going way beyond the technical into a really gifted subtlety and expressiveness. Handheld masks are used beautifully to represent the characters in old age, the masks flying away as memories unfold and the characters become their younger selves. Each moment of transformation is seamless, and there are some particularly lovely sections where a removed mask takes on a puppetesque quality, the older character observing a younger self or partner. Objects are manipulated with tender care: a cup fought over between the real and spirit worlds; a necklace that dances with exquisite joy; the little suitcase that has its own narrative in the play, representing the one thing that she (when younger) has to hang on to, and that he (when older) has to let go of.

The physical action is supported by an onstage, visible accordionist (Kim Heron) who provides the perfectly-pitched soundtrack – playing or whistling snatches of songs that have accompanied the couple’s life journey, from ‘We’ll Meet Again’ to ‘Girl From Ipanema’; tapping out the interminable ticking of a clock with the accordion buttons; providing the labouring breath of a dying woman with the instrument’s bellows.

A word also about the audience. I don’t think I have ever seen a more attentive audience, at the Edinburgh Fringe or elsewhere. From the opening image of the widower sat at his kitchen table to a closing ‘life flashes by’ whirlwind of reprised memories as the ghost departs, the whole audience is almost holding its collective breath, and as the lights come up to rapturous applause, it is clear that there is hardly a dry eye in the house.

A near-perfect example of contemporary wordless theatre – and proof (should anyone need it) that theatre without words can engage the head, touch the heart, and nourish the soul just as effectively as any other form. A little taste of paradise on earth!