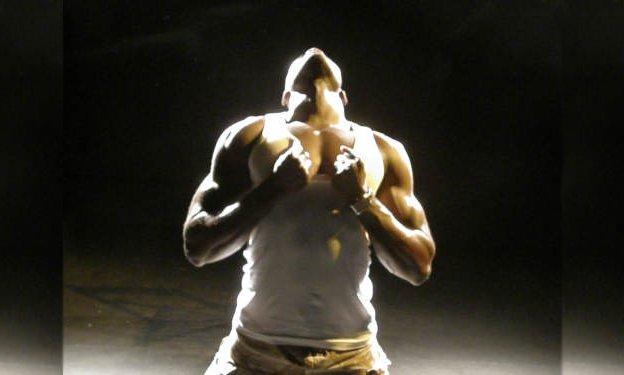 As I skate in a few seconds before the performance (after running up and down The Scotsman steps to check the platform for a train back to Glasgow), the box office are just about to sell my ticket. ‘It’s a very popular show,’ they say, as apologies follow on both sides. Sure enough, three of us almost-latecomers end up sitting or standing in the aisle. Strip Search does seem to be one of those word-of-mouth successes that only Edinburgh produces.

A key selling point is that it offers, in the words of the production company Homo Promos, ‘full male nudity, gay sex, strong language and images some may find offensive’. A special treat, of course. But the trick is that by the time you reach this point, the physical thing seems only a small part of the man, the character, the life story that has been told.

Strip Search is written and directed by Peter Scott-Presland. So on one level it is a scripted monologue. However, the subject matter of a male stripper seems to invite, almost inevitably, dance routines. Although perhaps not from a devised physical theatre tradition, the result is highly muscular, pumping up the audience, using the tricks of the trade.

The person behind the pecs is complex and damaged. From a childhood of abuse as a young black boy in Wales, he becomes addicted to fruit machines in the hope of buying perfume for and affection from his mother. Before long, realising the ‘power’ it yields, he starts selling sex as a young teenager, remaining philosophical in spite of a few stitches at the university hospital.

Nationality and identity are important themes, as ‘Squaddie’ is also a product of the army. He waves and curses the Union Jack, bitter at the harm wrought on him and a close friend who survived injury in Basra only to have his brains blown out by inner-city thugs.

Damola Onadeko gives an impressive performance. He has the presence, guts and energy needed for this character. Eye contact with the audience is particularly razor sharp, and the movement has conviction. However, the text is a litany of suffering, and its more melodramatic moments were sometimes strained.

Strip Search is nevertheless a hard-hitting piece, a well-deserved success. The narrative has an exaggerated side, piling on the misery, but it is not completely implausible. And it’s hard not to feel angry. As for Squaddie, of course, he just doesn’t actually have sex much these days…