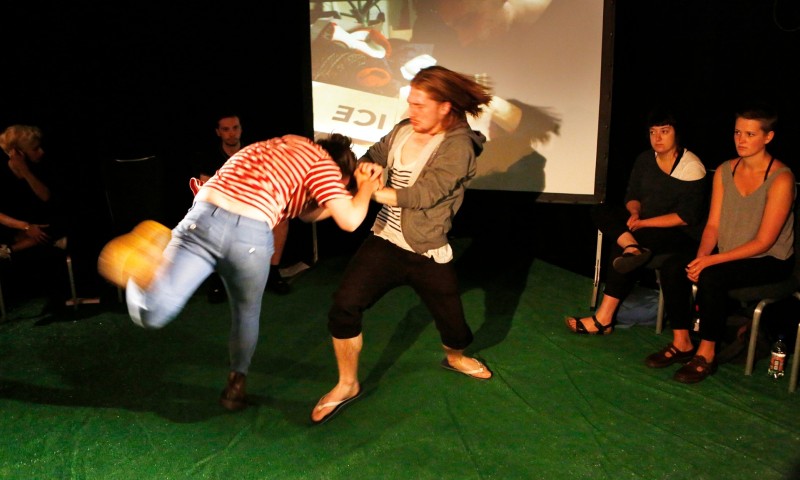 This piece, squeezed into a corner of a tiny space on the Royal Mile with six chairs, a projection screen and a square of green fake grass taped to the floor, begins straightforwardly, with six young men and women reading out the communications between them in their preparations for the play. Their ambition is to re-stage 1985’s notorious ‘Battle of the Beanfield’ where several hundred New Age travellers were attacked by riot police and arrested in an attempt to prevent the Stonehenge Free Festival from taking place. The travellers suffered massive damage to their bodies and property and were all later released without charge.

The young company link this storytelling to their own experiences of being sprayed with CS gas by police at Warwick University during 2014’s sit-in protest against tuition fees. They mix video of interviews with people who were there in 1985, and their own attempts to stage the events on location, with well written second-person descriptions of going to a present day Stonehenge celebration. The resulting cocktail contains so much information and emotion it gives you a huge amount to think about, and is powerful enough to stay with you for some time. This is an honest and searing piece that gives you an insight into the political awakening of a generation of young people, growing up and trying to make sense of a world where brutal oppression by state authorities lurks underneath the apparent freedoms our current society affords.

Disguising their project as ‘historical reenactment’ the company contact a reenactment society to ask how to stage a battle in which a group of armed thugs beat up a group of defenceless families. The response from the society turns out to be correct – why would you want to, when it is simply upsetting to do, to watch and for those at the time, experience. However this group of six manage to create here a powerful and affecting piece of theatre that attempts to deal with, and recover from, unnecessary trauma, without hiding or excusing the human brutality we are capable of.