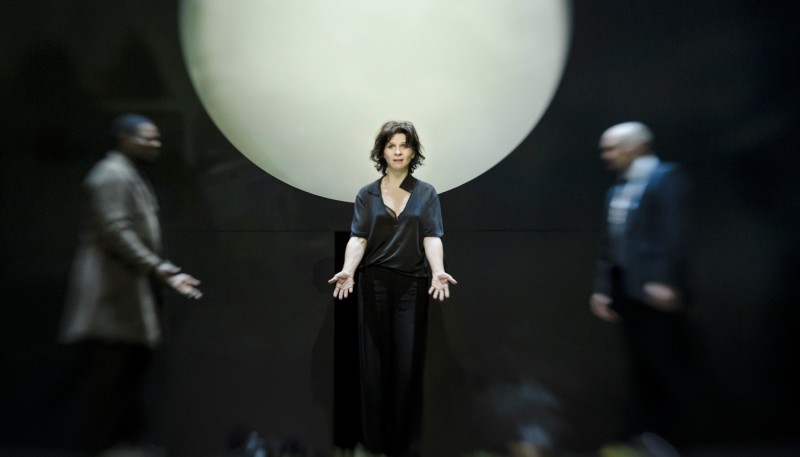 Suited in a contemporary new translation by Anne Carson that is as stark, cutting, and brutal as the modern world this Antigone lives in, Ivo van Hove’s production at the Edinburgh International Festival descends with the full weight of looming darkness of Sophocles’s classic.

A bold circle of light that beams through the center of Jan Versweyveld’s set stands as a lone symbol of light in a world where we are all on our way to darkness. Video projection by Tal Yarden carries us through cities and barren landscapes that keep us grounded in the sparse physical setting.  This production frames the story squarely around Kreon’s tragic determination and inevitable downfall. Antigone, one of Oedipus’s daughters, refuses to follow the law of the land as Kreon, the ruler of Thebes, orders that her brother Polyneikes will not receive a burial because of his actions in a recent civil war. Antigone refuses, instead calling on the irrevocable laws of nature to demand the justice of honoring her brother in his proper rites.

After a heated confrontation between Antigone and Kreon, he orders her execution. From this moment on, Antigone marches toward her death with ease and acceptance, virtually without complaint. This stands against Kreon’s demise, which makes death a far preferable alternative. His fate includes every horror that could be dealt to a man, and is made worse only by the fact that he does not die.

This production, produced by the Barbican and Les Theatres de la Ville, weaves Sophocles’s classic story simply and brutally. There is a sense of remorselessness in the grey office setting that matches Kreon’s unwillingness to change the course of his commands. The pleasure he takes in his complete authority mirrors the sense of doom that seems to pour out from governments daily across the globe where rulers choose their pride and power instead of governing earnestly for a common good.

Antigone, on a contemporary landscape, lands somewhere between a challenge and a warning: Will we learn before it is too late? Or is this a whistle in the breeze notifying us that we are past the point of no return to our inevitable demise?

The performances are strong through the ensemble. The chorus acts wisely as a collection of concerned citizens monitoring the moral compass of the central action. Actors shift easily between central roles and chorus parts, holding us inside a fluid universe where everyone changes identity, even the symbolic Juliette Binoche as Antigone (who becomes a messenger), but not Kreon, played powerfully by Patrick O’Kane. He remains trapped inside his own moral incapacity.

Particularly exceptional performances are turned in by Finbar Lynch in a biting scene as Tiresias, and Samuel Edward-Cook as Haimon going toe-to-toe with Kreon as he argues for the virtue of one’s ability to alter their perspective.

Haimon throws thick philosophical passages at Kreon in their confrontation, challenging notions of power and education, as he lays out simple truths that are at once undeniable yet elusive. ‘There’s nothing shameful in being a person able to learn,’ Haimon pleads. We all know, sadly, that if Kreon does learn, it will certainly be too late. We hope the same isn’t true for us.