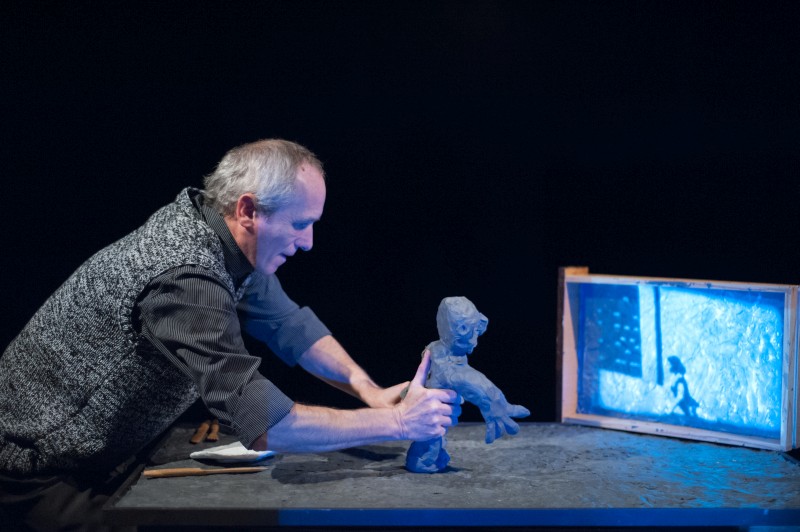 I heard the drive from Poland to Scotland was quite eventful, and the group on the morning of their first performance were tired and stressed, and the equipment had suffered from rain damage. After waiting until they’d settled I managed to see two of the three pieces they were presenting at the Fringe before heading for the World Festival of Puppetry in France.

The caravan seats seven, leaving a small playing space at the end. On the side, behind a black gauze curtain is the technical box and the electric guitar player, who accompanied both pieces I saw.

The first took place behind a clear Perspex screen, on a tabletop stage. A puppet of an old lady in a wheelchair, her hands strangely oversized as they are the real hands of the two puppeteers, struggles with the lamp switch before lifting a series of little panels from the playboard revealing a variety of props; knitting and then peeling an apple before producing a roller and painting on the Perspex screen, allowing little grainy projections, memories of her life, to appear. This simple piece is touching and keeps surprising the audience, the music creating a meditative atmosphere.

The second piece presents a (real-life) man sitting at a table whose surface is revealed to be heavy grey clay. He lays the table for dinner with clay plates, cups, jug, and wooden cutlery before moulding all the various clay items into body parts, creating a figure with a face. He cuts holes into the table allowing a light below to stream through and turns the figure into a vertical plane where a projection of a small man is trapped. Finally a face is projected onto a clay screen. It’s his face and he moulds a clay face into the projection creating a hyperrealistic self portrait.

The Metaphysical Caravan a great example of the kind of controlled micro-theatre that puppetry excels at. Their combination of atmospheric live music, projection, puppetry, and performance allows for a great variety of performance art pieces.