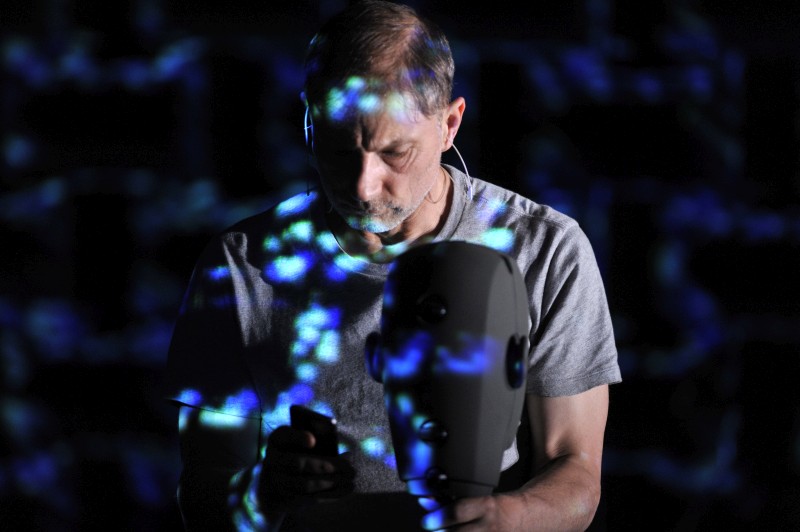 Complicite have built a reputation as master visual raconteurs. Their body of work has almost come to define the term physical theatre as they have etched a unique style that fuses physicality with a deconstructed stagecraft, supporting gripping narratives. In their latest piece The Encounter they not only uphold this reputation but break new theatrical territory. With the magical use of binaural technology Simon McBurney brings us sensory storytelling like nothing I’ve ever seen or heard before. It’s not that binaural technology hasn’t been used in theatre up to now, David Rosenberg and Glen Neath have been playing with it for a while and use it for both of their shows Ring and Fiction. The difference here is that we pair this audio wonderland with a visual marvel that is both breathtaking and beguiling.

Although the clever technology is impressive, what is truly marvellous about this piece is the narrative. McBurney brings us a passionate account of a true story that necessitates something unique for its retelling. Inspired by the book Amazon Beaming by Petru Popescu, this is a wildly intriguing story about the journey of National Geographic photographer Loren McIntyre into the Amazon, where he is stranded and becomes reliant on the hospitality of the Mayoruna tribe in order to survive.

McBurney frames this narrative with an exposition about his personal relationship with his children, and the ways in which their lives are documented, with masses of photographs in contrast to previous generations. Mapping the development of their existence with a constant stream of evidence and proof that they do exist, watching their brains develop as they begin to understand this themselves, amongst the notion that others too exist. This touching insight begins to probe at the overriding themes of the story. McIntyre wants to document an undocumented people. The Mayoruna have never had extended contact with the outside world, they are an unknown and their understanding of existence, communication, and time is unique to themselves, breaking down McIntyre’s very grasp on consciousness and being.

McBurney uses a plethora of innovative audio technology to bring this story to life. The entire audience wears headphones throughout, a voice tool enables McBurney’s voice to switch between his own as the narrator and the voice of McIntyre, a deep drawling American accent that switches us into first-person narrative. As we watch McBurney become McIntyre he uses sound loop pedals to record rustlings of the jungle made with VHS tape and his own body to create layers of forest sound percussion. The effect is startling, binaural technology replicates audio in the way that the human ear receives it, making us feel that sounds are coming from all around us. Of course, in true Complicite style, McBurney has already explained that to us at the beginning, we are as aware of the trickery as we are of the simple ways that the sounds are being made, and yet, this feels like some kind of magic.

As McIntyre travels deeper into the jungle with the tribe, his grasp on what he thinks of as reality and time begins to warp. Whisperings of the jungle, death, and rituals surround him and he establishes a relationship with the tribe’s chief in which they begin to communicate in telepathy. The entire back wall of the expansive stage is covered in rubber-looking asymmetrical blocks that produce a warped grid, and digital projection onto this creates a hypnotising visual effect. The dark, slithering jungle is transposed via this back wall into a rippling, pulsing mass of green as McBurney trudges on stage in a visualisation of McIntyre’s gradual journey into a liminal reality.

This is a theatrical feat. It is clear that an amazing amount of time, passion, research, and manpower has gone into its creation. There are perhaps some visual elements still to be found as at times I find the stage almost too big for this one-man show, but there is no doubt that the huge effort it has taken to realise this piece has been well worth it. I am moved, amazed, enthralled and engaged throughout. McBurney has dreamed a theatrical vision for a story that grasps at the very fundamentals of existence: with a theme this big it is a wonder to see how Complicite have realised a production that can handle it. The chief of the Mayoruna asks McIntyre at one point why they would want any contact with ‘white man’, as ‘they will come with their planes, their guns and alcohol,’ and I leave feeling shaken by the shoulders, questioning all that we think we know and what our understanding of consciousness has lead us to in the ‘developed’ world. McIntyre shouts ‘I have never been part of nature!’ and the driving question of how we have engaged / disengaged with our existence is posed with deafening strength. This show is powerful, provocative and beguiling. A truly transformative masterpiece that demonstrates just how moving and relevant theatre can be.