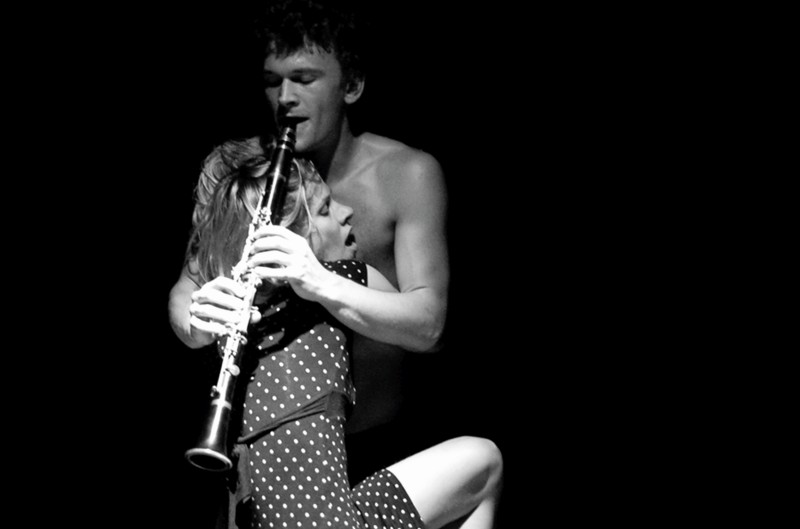 Awkward Happiness is a contemporary dance-theatre piece performed by an attractive young cast of four, featuring singing, acting, contemporary dancing, live musical accompaniment, and video projection. As we enter a lithe young lady is sat on a table, swinging her legs, swigging wine and throwing sly smiles in our direction. As the show begins she tells us that ‘People think I’m just a blonde girl, a person who’s laughing all the time,’ and that ‘A happy person is a sick person.’ Partly inspired by Kundera’s The Unbearable Lightness of Being, the show seems mainly to express the difficulties of finding happiness in relationships. Two couples engage in flirtation, desire, resistance, and recrimination, represented through a movement vocabulary of writhing, lifting and jumping, alongside dramatic performances. There are also some very well-made, rather abstract video projections, and throughout the production values are very high.

I found it most effective in its more theatrical sections such as a sequence where one couple argue on a bench whilst the woman is mixing flour in a bowl. This is both humorous and engaging, and the flour is gradually spilt on the floor, providing an interesting aesthetic effect when they later roll-around in it. However, the show’s overall approach is abstract and suggestive rather than narrative, and doesn’t clearly comment on the issues explored.

There are an array of contemporary performance tropes on display, including speaking through mics, getting changed in the corner, lots of underwear, a scene where the ladies fall over and the men only just catch them, some rolling around in the flour and some unusual live instrumentation, in this case a zither.

At one point the super-toned and quite strikingly striking blond woman stands in her underwear grating an apple and tells us that ‘To be gorgeous is a result of hard work.’ This came as surprising and welcome acknowledgement of what many people must surely have been thinking about. She begins manically rubbing the juice of the apple into her skin, whilst she continues to tell of the sacrifices needed, such as having ‘no fast food, only slow food.’ Had this point been made earlier and laced with a stronger undercurrent of humour, it could have counterbalanced my nagging sense of cynicism about the production’s sheen of existentialist chic.

This is a well made, quality production performed by a clearly talented cast, but often felt generalised and formulaic in its approach to an interesting and complex subject.