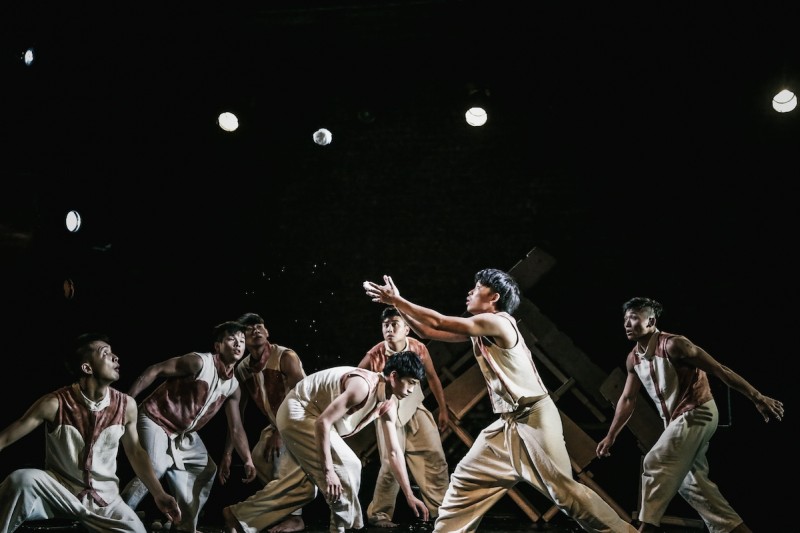 Self and Others by Formosa Circus Arts, and part of the Taiwan Season at Fringe, presents a blend of circus, theatre, and dance. The company works unusually for a circus, preferring to focus on group dynamics, dance, and texture, instead of individual virtuosity. Each performer wears the same minimal costume in rather consistently dim lighting to create an effect of a singular whole that morphs and moves through space. This ensemble focus generates many of both the strengths and weaknesses of Self and Others.

In their opening image, one of the performers emerges balanced in a handstand on top of an amorphous gloop where limbs appear to be far more numerous than people. The beautiful image of the mass is captivating, and repeats in a variety of formations throughout the show. The weakness, however, came through in individual skill as the performer in the handstand at the top of the mass never actually managed to press into a handstand. Instead, he managed to balance with bent arms momentarily before returning to the ground. Initially, I wondered if this could be attributed to style, but they continued to attempt handstands and balances in various formations, and frequently fell, struggled, or missed. This muddiness in acrobatic skill carried over to other turns that emerged beautifully out of ensemble movement, only to be executed in a clunky finale. It is also worth noting that the recorded music accompanying these feats was uneven – sometimes lending a soft eeriness that enhanced their shape-shifting, but at other times striking repeated harsh tones that seemed at odds with the nature of the movement, and were sometimes difficult to endure.

Some of the stronger material included some evocative play with light; ensemble silks images that transformed into small characters; and ensemble dance with wood blocks to create a powerful soundscape and numerous visual images. The collective invention of imagery was consistently striking, and laid a foundation that left me curious about what can emerge come from their continued creative exploration. Formosa Circus Arts is a young company (only four years old), and they show great promise. But though I look forward to seeing what they come up with next, it isn’t fully realised here.