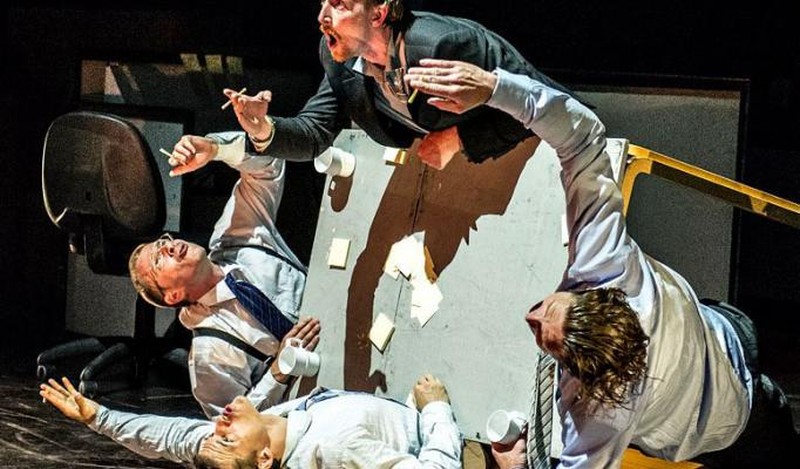 BLAM! is set in a mundane office where four employees are as bored with their tedious lives as anyone in their shoes would be. That is where anything usual or tedious about this Danish production, returning to the fringe after a sell-out run in 2013, ends. At first, hints of creativity and playfulness from the workers peep through, in short flashes. They use office supplies to invent action-packed worlds for a few moments at a time before returning to their monotonous office routines. BLAM! takes its time letting us get to know the distinct personalities of the four workers – the boss, the showoff, the nerd, the usual guy. And then, to steal a phrase, ‘BLAM!’, the snippets transform into a full-blown action adventure on the scale of Diehard, The Matrix, or T2: Judgment Day.

Director and creator Kristján Ingimarsson and the company have spared no detail in this carefully crafted romp of insanity. The four performers repurpose every object you would find in an office, transforming them into high-flying, careening, walloping, pulverizing WHAM, BAM, action-adventure glory. The genius of their physical gags, acrobatics, and object use offer constant surprise as they build minute by minute. Finally, when it seems like the show has blammed all there is to blam, BLAM! takes us on a journey of such insane proportions it’s difficult to believe that it all occurred live inside a theatre with only four guys and some office supplies.

For fans of action adventure, flips and tricks, machine guns and glory, or playful physical comedy, BLAM! unabashedly delivers a wild theatrical experience you have surely never imagined. The company has taken a high pedigree of skill in theatre, comedy, and acrobatics, and given their full capacity to invent pure mayhem on a scale I have never seen so expertly and precisely mounted in a theatre production. For those who like a little story, don’t worry, there is love, tragedy, heartbreak, friendship, and a poker scene with subtle touches of physical theatre finesse.

Across the landscape of work at this year’s fringe, BLAM! offers the sort of adrenaline-pumped escapism that you would usually only find in the megaplex. The show might feel like it’s short on artistic depth… but in fact it manages to capture subtlety in its expert use of diverse theatre and circus forms, and, well, it’s so much fun!