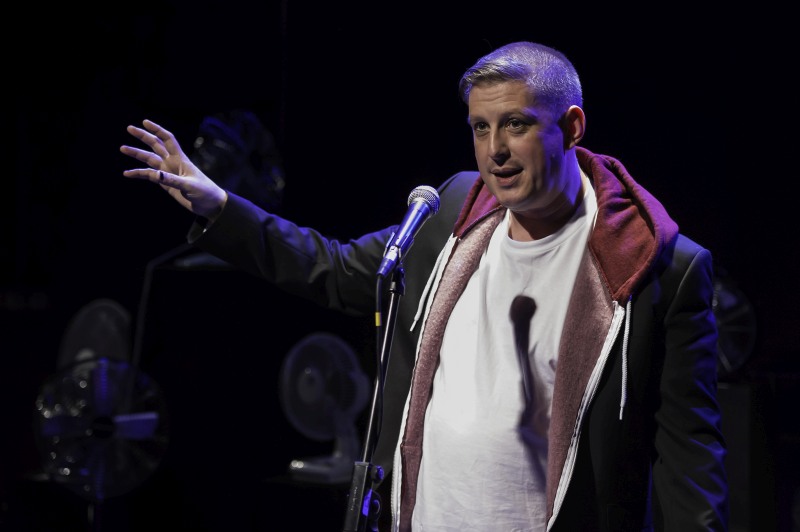 Men in the Cities is big play, presenting a ranging cast of men of all backgrounds and ages on the canvas of our largest and most multivalent city. It is also a solo storytelling show. Chris Goode holds the stage from an almost static station at his microphone, allowing his prose full play. There’s only one moment when this image is broken (and broken quite spectacularly) and even this almost feels too much – his crafted language is so studded with emotional depth charges and brilliantly throwaway comic touches that you don’t want to miss a beat.

Men in the Cities explores relationships between men – lovers, fathers and sons, friends, partners, objects of desire. It is also a play about failure – to connect, to communicate, to write. Goode’s eye is as intense and humane as his stage presence, he marshals his material and characters with both kindness and a brutal emotional honesty. The framing feels novelistic – we move effortlessly between Rufus, a lost young man whose sexuality is an urgent, violent force; Brian, broken by failed relationships and repressed everything; and here is Rahan, tired and philosophical, opening his newsagents. We glide between these worlds on wings of authorial vision. Yet Goode too figures, grappling with his writing and with his own story and failing relationships, openly owning the subjectivity of this vision, even as we identify with it.

There has always been a storytelling strand to Goode’s work – 2007’s Total Theatre Award shortlisted Hippo World Guest Book and 2009’s Wound Man and Shirley both opened his work to wider audiences. In each case the careful development of an apparently simple theme opens into profound and often gut wrenching commentary on isolation, the failures of idealism and the limitations of intimacy. Here, his London is a city at odds with itself, as messed up as its proliferating skyline and fucked by its own Shard. His deftly developed cast of characters model a male experience of aggression, frustration, isolation, and hopelessness.

Yet though the experience is coruscating and the outlook seems bleak, bookended with incidents of violence and saturated with a sort of wry desperation, the play also embodies a success, a connection. After all, despite difficulties, it has been written, and we listen and understand: the act of storytelling frustrates its own fatalism becoming itself an act of hope.